2016 Summer Issue of The Southern Star 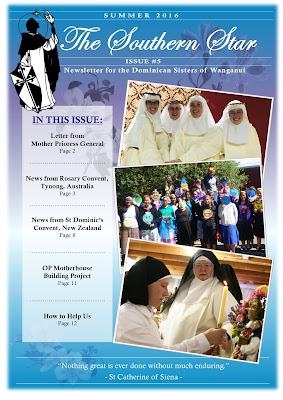 After a long silence, a new issue of The Southern Star is now available for your reading pleasure.

A very special 12-page issue, it contains the reminiscences of Mother General's early Religious life, some lovely poetry by our talented pupils in St Dominic's College in Wanganui, and an update on the Motherhouse Building Project in Tynong, Australia.

Click on the cover page on the left or the link above to access and download a PDF of our newsletter. (Do have it on 2-page view - pages 6 and 7 are quite special!)

Thank you for generous support and prayers. May God bless you and may Our Lady of the Most Holy Rosary obtain many graces as we enter into the new month of Mary!

If you would like to e-subscribe and receive the newsletter on a regular basis, do send us a request at astarinthesouth@gmail.com. Our postal address is in the newsletter if you prefer a hard copy.

Posted by The Dominican Sisters of Wanganui at 8:48 PM 2 comments:

Are you living in driving distance from
Longwarry - Victoria - Australia? 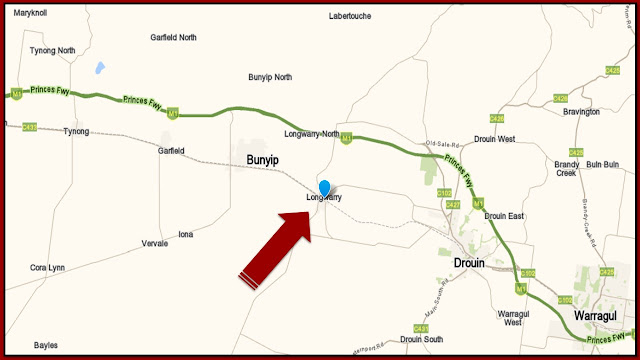 Come and Support the Fundraiser
organised by a local parishioner in aid of the Sisters. 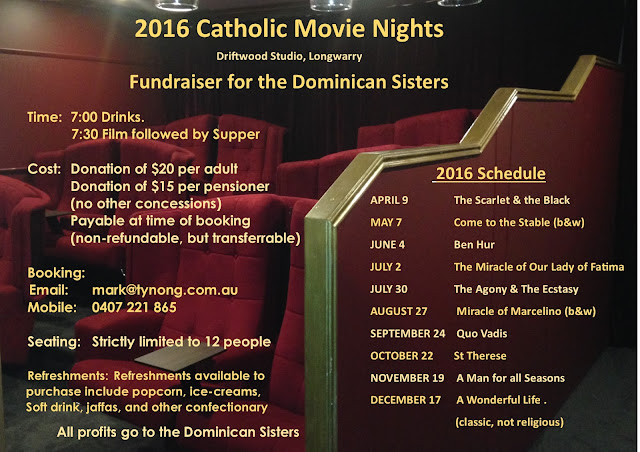 Posted by The Dominican Sisters of Wanganui at 9:25 PM No comments:

Some news from the land of kangaroos,echidnas and cockatoos. 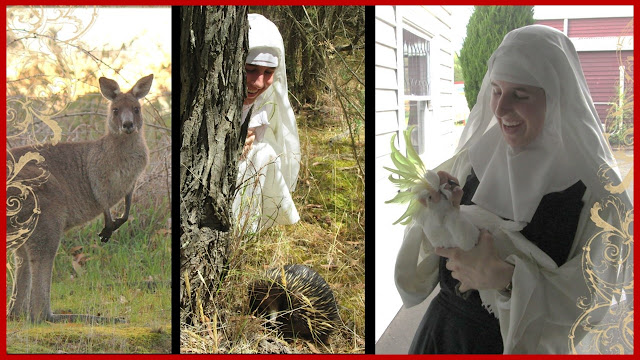 Father Albert O.P. preached the retreat and celebrated the Mass during which the four postulants asked to be received into the Order, were clothed in the Dominican habit, chose the crown of thorns and obtained a new name in Religion. 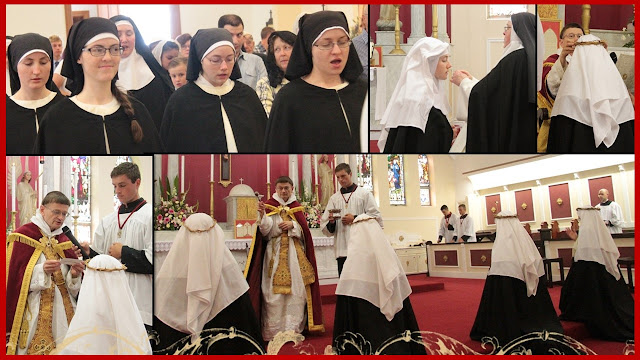 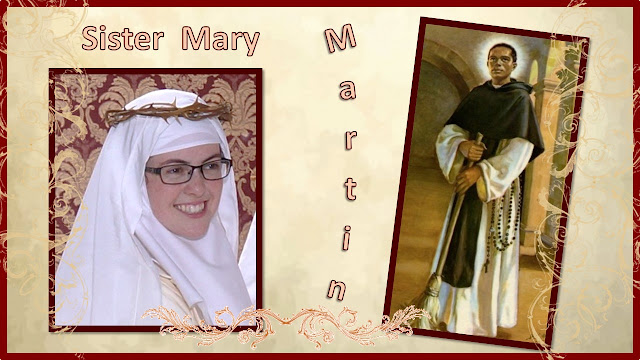 Patron: Saint Martin de Porres
“Before he distributed the food, he blessed it, saying simply: ‘May God increase it through His infinite mercy!’ and then began to fill the cups, the bowls, the little pans...There was not enough for more than four people, or six at the maximum. But the poor continued to come and Martin continued to pour out soup until he had filled the last bowl of the last of his poor. At the end, all had had sufficient, ‘and all were satisfied, even the dogs and the cats,’ noted Brother Ferdinand de Aragones. And how could it have been otherwise? Martin had given up his own meal, and then called the infinite riches of divine mercy to his aid” (Cavallini).

One can hardly think of St. Martin de Porres without thinking of one of his many good works (helping the poor, tending to the sick, instructing the ignorant) or amazing gifts from God (bi-location, levitation, miraculous knowledge and cures). Yet it is not these miracles, gifts, or even his innumerable works of charity, which distinguish him as a saint, but rather the heroic degree of virtue (i.e. faith, hope, charity, prudence, justice, fortitude, and temperance) by which they were done.

Born in Lima, Peru in 1579, St. Martin was pious, displaying exceptional charity towards the poor even as a child. Much to the dismay of his mother, he would often come home from the market empty-handed because he gave all the money to the poor. He also passed much of his time visiting Our Lord in the many churches throughout the city. When the time came for young Martin to choose a trade, he decided on becoming an apprentice to the barber who in those days in addition to cutting hair took on many medical tasks. St. Martin had a keen intellect and advanced quickly in his trade. Yet, he did not use this knowledge for his own benefit, but helped countless number of poor never asking for anything in return and always directing everything to the glory of God. Although his occupation kept him busy, he did not use it as an excuse to lessen his prayer life, but rather would spend his nights rapt in prayer.

At the age of fifteen, St. Martin entered the Dominican monastery of the Holy Rosary seeking out the lowest position - that of coadjutor, and although he made religious profession nine years later and also took on additional roles such as that of infirmarian, he is commonly depicted with a broom as a symbol of his great humility. St. Martin de Porres accomplished magnificent works throughout his religious life, yet by his humility and his willingness to do the lowest tasks, he exemplifies the maxim that a small deed done for the love of God is worth infinitely more than a extraordinary deed done for self. 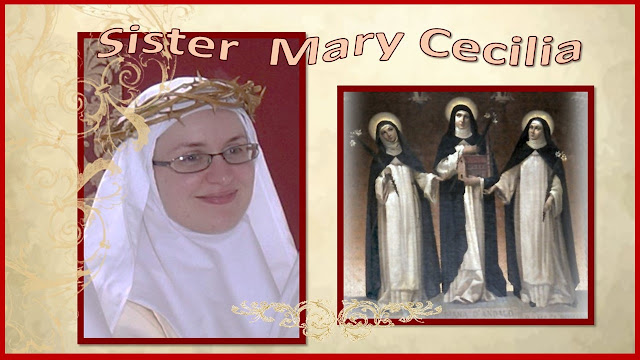 Patron Saint: Cecilia Caesarini
Cecilia belonged to an ancient Roman Family.  She was only seventeen when St Dominic was attempting to get the sisters roaming about the city of Rome to follow a strict rule of enclosure at St Sixtus, at the request of Pope Innocent III.  When St Dominic came to their convent at "St Mary's beyond-the-Tiber", she was the one who urged the prioress to support his cause.
She was also the first to beg for the habit and the rule St Dominic was trying to establish, and the eventual success of his venture was aided by her.
In  1224, she went to Bologna with three other sisters, including Sr Amata, to the new convent of St Agnes recently founded by Diana d'Andalo.  Sister Cecilia was the first prioress there, and a strict one.
Sister Cecilia lived to a very old age, and though nearly ninety at the time she was asked, left us a very clear description of the appearance, personality and characteristics of St Dominic.
Cecilia died in 1296.  She was beatified, together with Sisters Amata and Diana, in 1891. 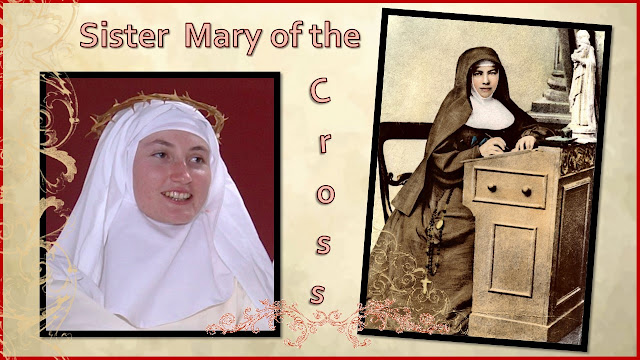 Patron: St Mary of the Cross
This new novice likes to think that she can lay claim to a host of new patrons. Just some examples are, the Cross on which our Saviour died for us, Our Lady of Sorrows, St. John of the Cross and St. Paul of the Cross! However resigning herself to the ‘one feast-day only’ rule, she celebrates her feast on August 8th, the feast of our very own St. Mary of the Cross- Australia’s first and only canonised saint.
Mary Helen Mackillop was born January 15, 1842 in Fitzroy, Victoria. In 1867 at the age of 25, Mary together with a priest Fr. Julian Tension Woods founded a new Institute known as ‘The Sisters of Saint Joseph of the Sacred Heart’ also known as ‘Josephites’ or ‘Brown Joes’. These Sisters were to provide education for children of the poorer classes, as well as opening orphanages and providences to care for the homeless and destitute, and refuges for ex-prisoners and ex-prostitutes.
When Mary entered religion, she became known as Sister Mary of the Cross. In 1867, she wrote about her name, “My name in religion is Mary of the Cross. No name could be dearer to me, so I must endeavour, not to deserve it — for I cannot — but at least I must try not to disgrace it.”
Mary suffered much throughout her life; she battled with ill health and her work met with much opposition from people both inside and outside the Church. She was unjustly excommunicated when she was 29 years old; and at another time, she was accused of being an alcoholic. In spite of her troubles, Mary had great confidence in God and in 1873 wrote: “To me, the will of God is a dear book which I am never tired of reading, which has always some new charm for me.”
Mary was a great lover of Charity which she displayed in many and diverse ways. Sr Alphonsus Jones recalled in 1926 that once when a sick Sister was brought in from the country Mary insisted on the Sister taking her bed for some weeks while she herself slept on the floor.
After a stroke in 1902, Mary suffered intensely for another seven years and died 8 August 1909. She was canonised by Pope Benedict XVI on 17 October 2010. 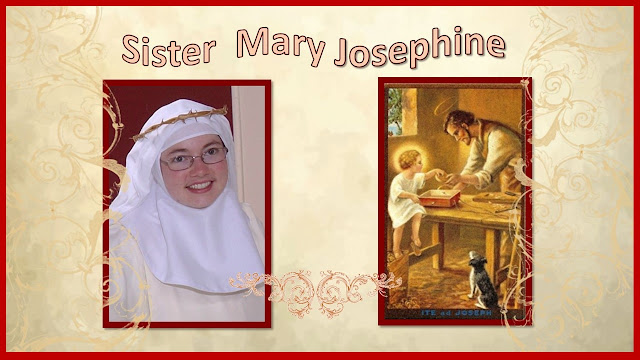 Patron: St Joseph
I feel singularly blessed to have received the name of Sister Mary Josephine and thus to be dedicated to each of the members of the Holy Family: to Jesus as the raison d’etre of every religious, to Mary as the special Mother of Dominicans, and to St. Joseph, the patron of the Church and of Canada, who by a kind Providence of God is now the special patron saint of Rosary Convent’s little Canadian novice.
It is a little overwhelming to realize that from all eternity, the Son of God planned to “share” His own foster father with me.  There is surely no greater saint to whom He could have entrusted me.  As the spouse of our Lady and the breadwinner of the Holy Family, St. Joseph soared to the peaks of perfection while humbly toiling at the most mundane tasks, happy to make himself as it were the personal slave of the Saviour and His Mother.  No matter if Joseph had to sleep in a dark stable on a frosty night; no thought of his own comfort entered his mind, but only the matter of how best to provide for his loved Ones.  No matter if he had to get up in the middle of the night and leave everything behind in order to rush his Family to safety; he was content in the certainty that it was God’s will.  No matter if he had to spend weary and footsore days combing the city of Jerusalem at our Lady’s side; finding his dear Master in the Temple at last was reward enough for him.  St. Joseph’s constant and unassuming self-giving amid the vicissitudes of life, culminating in a happy death in the arms of Jesus and Mary, make him the ideal model for an aspiring religious.


Good St. Joseph, our most powerful protector and intercessor among all the Saints, thank you for being a father to me.
~*~
Three second-year Novices made their first Profession by taking temporary vows and exchanging their white veil for a black one.
Congratulations Sister Mary Amata, Sister Mary Imelda and Sr Mary of Compassion! 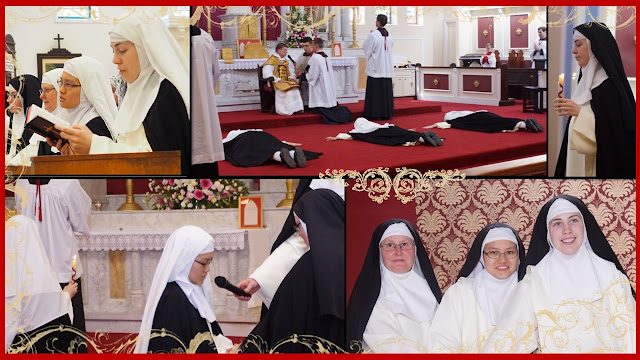 Congratulations to Sister Marie Dominique who received a ring as sign of the perpetual vows she made during the same ceremony. 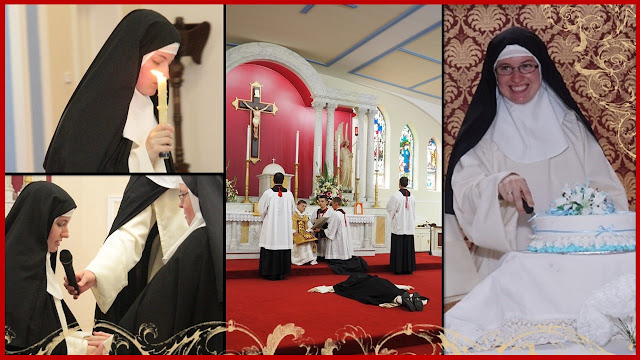 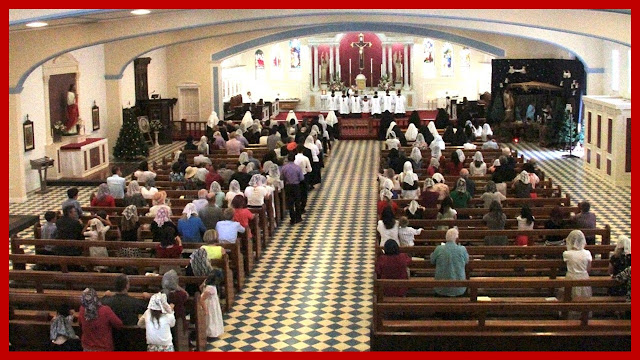 THE SISTERS WISH TO THANK All WHO HELPED WITH THE RETREAT AND CEREMONIES ~AND ASSURE  THEM OF THEIR PRAYERS IN RETURN! 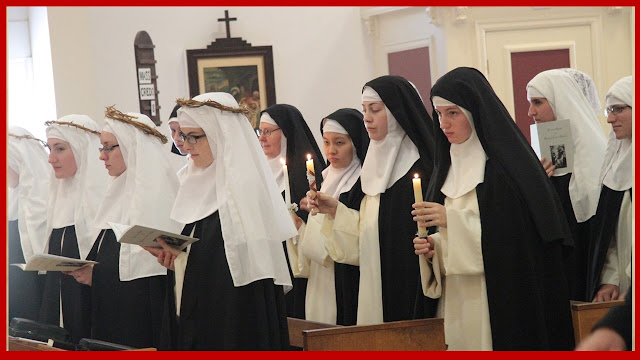 By the grace of God may we remain ever faithful to our promises! 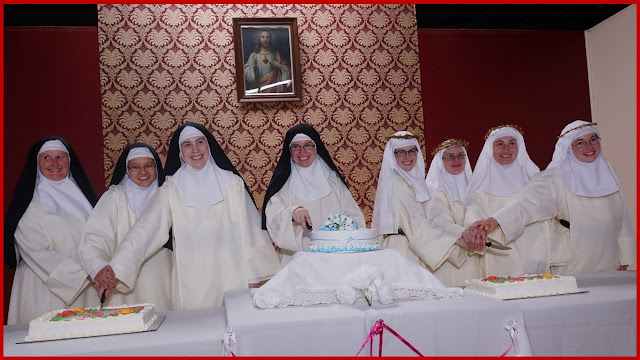 Posted by The Dominican Sisters of Wanganui at 2:22 AM 2 comments: