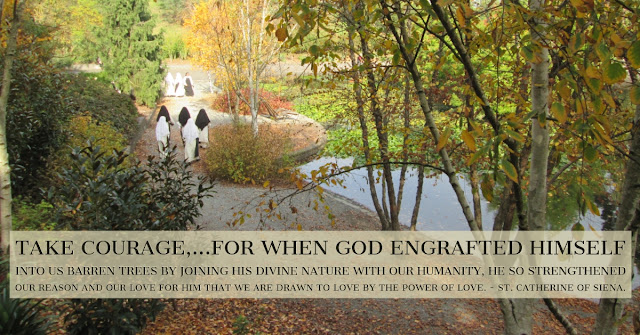 Posted by The Dominican Sisters of Wanganui at 3:35 AM No comments:

Take up our Latte Challenge 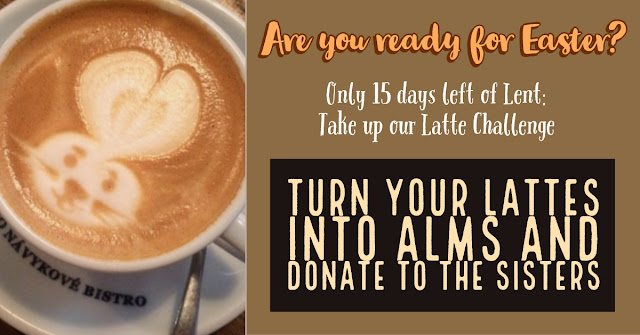 Use the PayPal Donate Button to the right of this post (right hand scroll bar) to donate now.
Posted by The Dominican Sisters of Wanganui at 5:36 PM No comments: 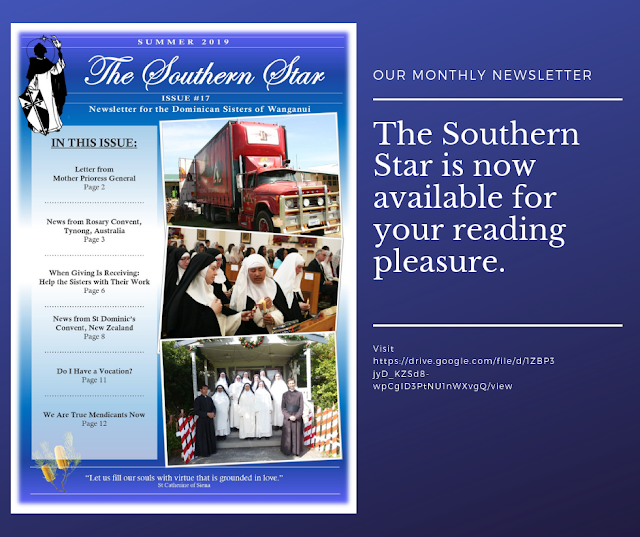 Posted by The Dominican Sisters of Wanganui at 10:00 PM No comments:

A word or two from St Catherine of Siena 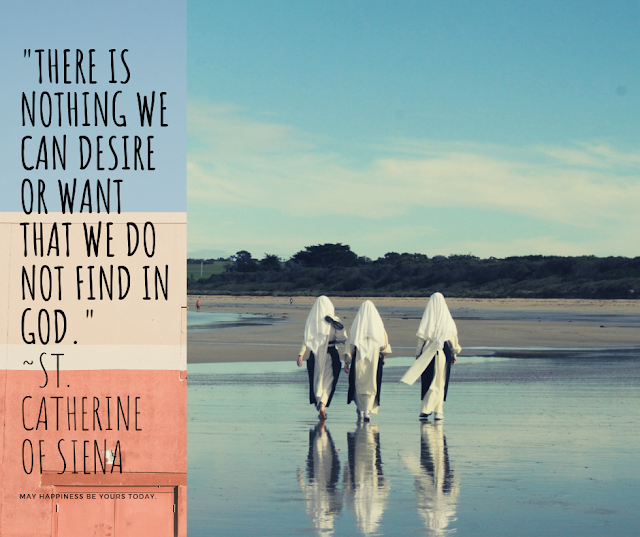 Posted by The Dominican Sisters of Wanganui at 9:02 PM No comments:

Learn More About the Call to the Consecrated and Religious Life! 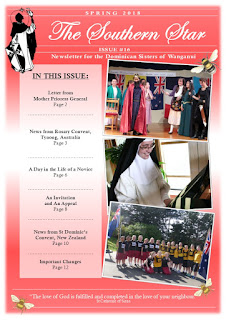 Are you interested in a Dominican Vocation? The Spring Newsletter has a special on What Do Novices Do All Day? (And other Sisters too.) Take a peek; perhaps you might find yourselves called by God to consecrate yourselves to Him in the Dominican Order!
Posted by The Dominican Sisters of Wanganui at 9:58 PM No comments: 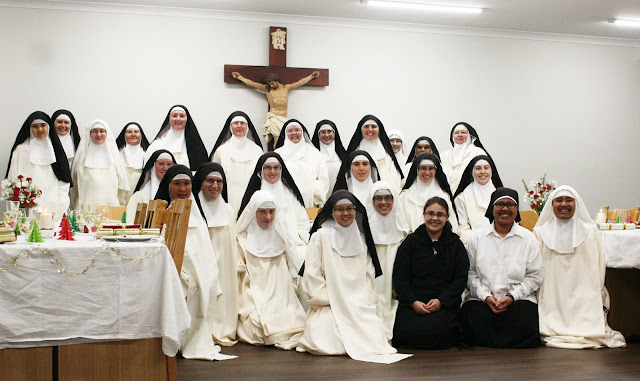 Here we are after Christmas Midnight Mass - both communities in Rosary Convent.
We wish all of you a most holy and happy Christmastide and beg Our Lord to bless you with a happy year ahead.

Please keep the Sisters in your prayers as we go into retreat from today (Holy Innocents) till the Epiphany. We are very blessed to have Fr Albert, O.P. once again with us to preach our retreat and preside over the ceremonies. 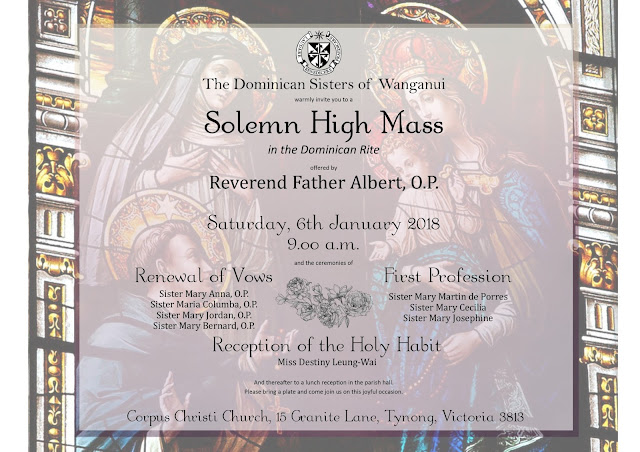 Even if unable to be there with us, do join us in spirit - we will be praying for all of you.
Posted by The Dominican Sisters of Wanganui at 2:23 PM 2 comments: 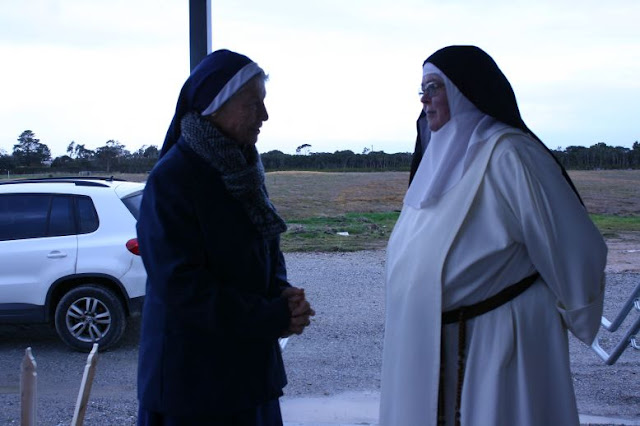 Time has flown by yet again, and we are already more than midway through August, which has been simply chock-full of activity. Before school began again on the last week of July, however, some of us had the happiness and privilege of lunching with Sister Shirley Gallagher, D.O.L.S.H. Now an octogenarian, Sister had spent 50 years in the missions in Papua New Guinea. We were given a wonderful talk on her life as a Sister in the missions, and it was inspiring to hear of Sister Shirley's unbounded trust in the Providence of God. When we asked her how she managed to persevere through all the challenges she faced in New Guinea (from having to resuscitate a newborn baby upon her arrival, fresh off the boat - to protecting the schoolgirls from thugs with guns and running refugee and rescue stations for villagers uprooted by volcano eruptions - she simply said, "You just had to pray very hard!" Her talk was candid, refreshing, and a real treat for all of us. 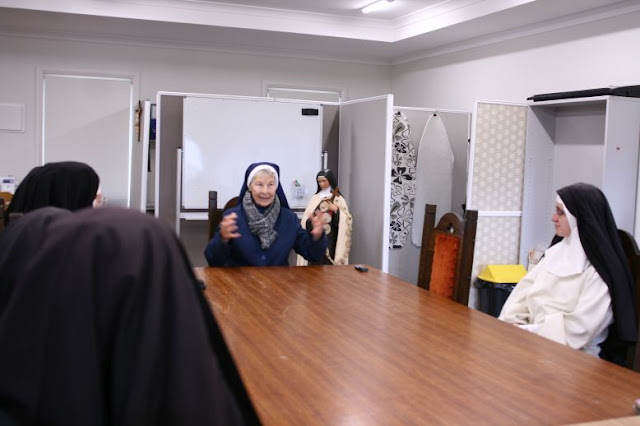 The next bit of excitement was having all the Community back in Rosary Convent at last. Three weeks may not seem like a long time, but to the travel-worn Sisters and those left at home minding the fort, there is truly no place like home! It was lovely to see all the happy familiar faces again, and an even happier occasion to peruse the Dominican books they had brought back from the States - when their (lost!) luggage was finally reunited with them, that is!

Saint Dominic's Day caught up very quickly with us this year - and the usual celebrations, netball game and liturgical prayers had to be prepared for. The girls look forward to the party the night before with great anticipation (one suspects it is due to the pizza, really) - and this year was no exception. After joining the Sisters in the school chapel for Sung First Vespers and a rosary, all proceeded to the gym for pizza, chatter, and team games that included mini-golf, target shooting, and even... sock-sorting. (We now know who is the champion sock-sorter in the entire girls' school) The evening came to an end all too quickly, but it was good to see a few faithful girls remaining behind to sing Compline with the Sisters and join their voices in praise of our Heavenly Queen at the Salve.

Netball the next day continued the festivities, and the girls played an excellent game, fielding some of their best players against the Sisters. The Sisters were down on team members due to injuries and illness, but were greatly helped by ex-pupil Annie Peterson and Miss Alexis Bell, whose contributions helped the Sisters win the trophy. The girls did not return home empty-handed, however. They received a jar of chocolate, which was consumed faster than the time it took Father to present the prize to team-caption Marie-Claire...

With all the excitement from Saint Dominic's Day still coursing through our veins, the Sisters hosted a group of girls from St Philomena's School in Brisbane, together with many of the girls we teach, for a "Mother and Daughter Evening" organised by the parish. The St Philomena's pupils had come for a visit of St Thomas Aquinas College here in Tynong, and while the boys were busily having a roast pig barbeque up at the church, the Sisters and ladies had a more genteel time socialising over tidbits and a crafty activity.

To some, school might seem dull next to all these exciting activities, but the warp and weft of each day remains the same; the praise of God in the Divine Office, the teaching of Truth not just in the classroom but also out of school. May God grant indeed, that as lovers of the beauty of the spiritual life, we may breathe forth the sweet odour of Christ in the holiness of our life - and bring forth more souls to adorn the beauty of Our Lady's Heavenly crown.

Posted by The Dominican Sisters of Wanganui at 6:04 PM No comments:

On Friday, 30 June, a vanload of Sisters drove off to Melbourne Airport amid a chorus of beeps, goodbyes and even a loud bon-voyage from the Year 10 Girls, who were cheekily observing how to say goodbye Rosary Convent style from their classroom windows. Mother Mary Catherine, Sister Mary Rose, Sister Mary Anna and Sister Mary Vincent Ferrer are now in the US for a Vocations Trip, while our dear postulant Destiny is home in Samoa for a holiday. 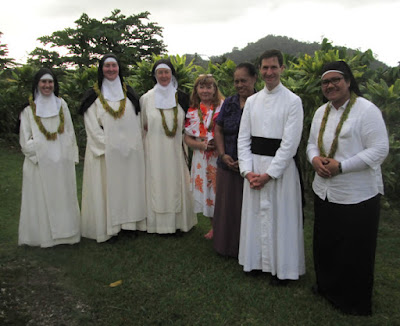 Samoa, home to two of our Sisters and enroute to America, simply could not be passed over. We had heard so much about the ripe harvest of souls in Samoa! As zealous apostles in the footsteps of our holy father St Dominic, the Sisters flew into Apia, where they were met by the Leung-Wai family and Fr Robinson, SSPX, who had kindly agreed to accompany them on this leg of their trip. 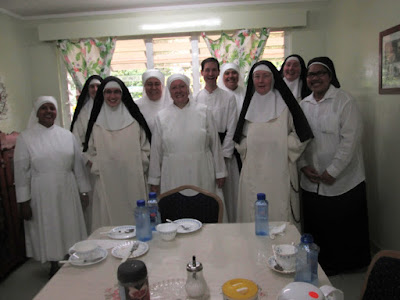 The Sisters were fortunate to meet with the youth group of the Cathedral parish, and also visited the Carmelites and Little Sisters of the Poor with Fr Robinson. They gave talks on the Traditional Mass and Religious Life, and were heartily grateful for the warmth and hospitality given them by the Samoans, who were not only friendly but also wonderfully religious and Christian in outlook. 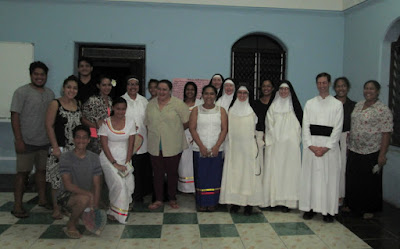 For us left behind in Rosary Convent, every email home from our missionary Sisters is an exciting source of news and new impetus for prayer. We follow their travels assiduously, commiserating with their fatigue and enjoying each new experience that comes with visiting a different culture in a foreign land. Do join us in praying for more vocations and the preservation of Dominican spirituality and Catholic education – such prayer cannot be ignored by the Lord of the harvest, Who has enjoined us all to pray that there may be labourers in His vineyard.
Posted by The Dominican Sisters of Wanganui at 6:00 PM 4 comments: