A Rose Garden for Our Lady 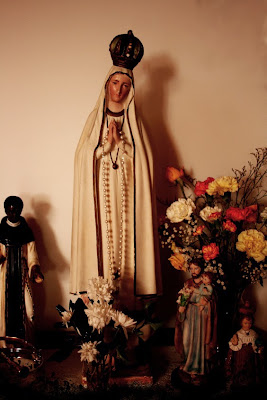 There is a well-loved story from the Lives of the Brethren that offers much consolation for those who wear the habit of our Order. Our Holy Father St Dominic, being one day granted a vision of Heaven, looked in vain for his children among the heavenly court. Being distressed, he appealed to Our Divine Lord, Who gestured to His Mother, saying, “I have given your Order to my Mother.” The Queen of Heaven then opened her mantle to reveal a company of white-clad religious – safely sheltering under her maternal heart!

The month of May is, as always, a most lovely month dedicated to the Queenship of Mary. Here at Rosary Convent, efforts to honour her as principal patroness of our swiftly growing novitiate this month have included both active works and contemplative ruminations on the special place that she holds in Dominican life. 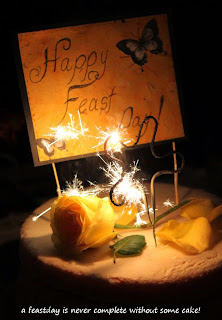 The month opened with the Sisters lustily singing a Marian “entrance” hymn accompanied by Sr Anna on the organ for each Holy Sacrifice offered daily upon our humble altar. 7am is possibly not the best time to be singing hymns, but we’ve managed so far to keep our veils on while thumbing through the hymnal and croaking along to the dulcet sounds of a very subdued organ.

We also honoured St Joseph’s feastday on May 1st with a Rosary procession that took us up to Corpus Christi and back again down the hill. Mother’s determination to not have yet another recreational dinner - in the community room, outside the refectory - was unfortunately bulldozed by even more determined Dominican novices who insisted that a 1st class feast could not possibly be passed over! 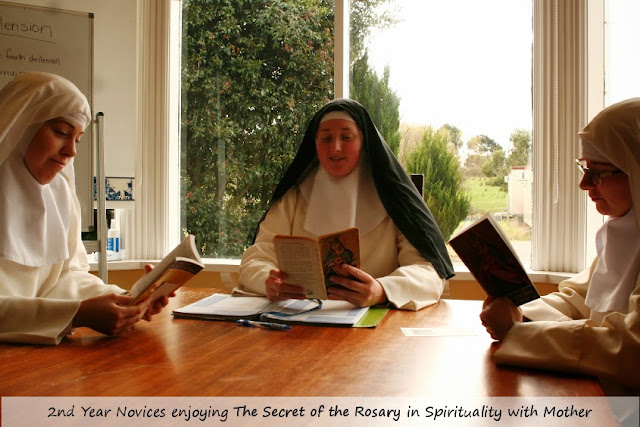 The 2nd year novices took up the slim volume of St Louis de Montfort’s The Secret of the Rosary for their Spirituality class this month – it is certainly delightful to read of the power of the Rosary and all the graces that Our Lady has obtained for her children through the centuries simply by the recitation of the Angelic Psalter. And for those who despair of ever being Scholastics, the humble Rosary – which is after all, materially speaking, a little child’s plaything of beads strung together – is an even greater weapon than all the eloquence and learning that can be put together by men.

In school, the Sisters have also opened the treasury of divine grace by encouraging their students to enrol in the Confraternity of the Holy Rosary. The Rosary by itself is one of the most richly indulgenced prayers by the Church, and when joined together by the prayers and sacrifices of a spiritual community of tens of thousands of souls past, present and future, makes for a most happy prospect of growing not just in love for our Blessed Mother, but also for the much-needed graces to do one’s duty of state with constancy and fervour.

The Sisters also made the pilgrimage to Hampton for their annual May procession of the Blessed Sacrament in honour of Our Lady of Perpetual Succour. With the weather surprisingly genial and the Sisters swelling the ranks of the choir up in the tiny choir loft, it was a most beautiful Solemn High Mass celebrated by Fr Elias, assisted by Fr Black and Fr Johnson. 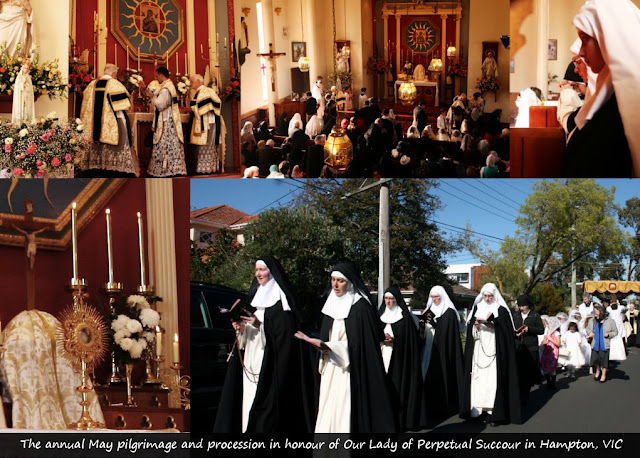 Unfortunately, May also means the beginning of very wet weather here in Tynong. It takes much fortitude and blind trust in God’s Providence to patiently await the day when the little mud flat by the girls’ block will have the first spade of sod turned once more with the commencement of actual building! 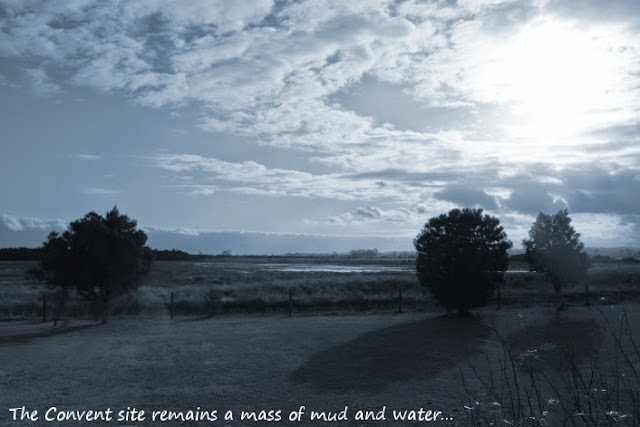 May is not quite over yet! So do join us in besieging and beseeching the Queen of Heaven for fair weather and the necessary funds to build the whole of the new Convent. 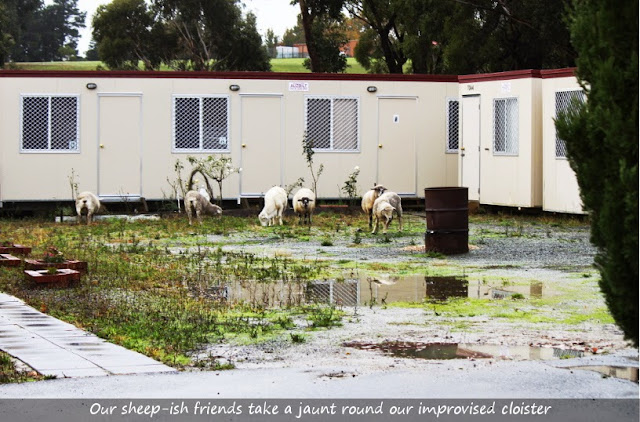 We might miss the sheep and kangaroos currently sharing our neighbourhood, but new lodgings are sorely needed! 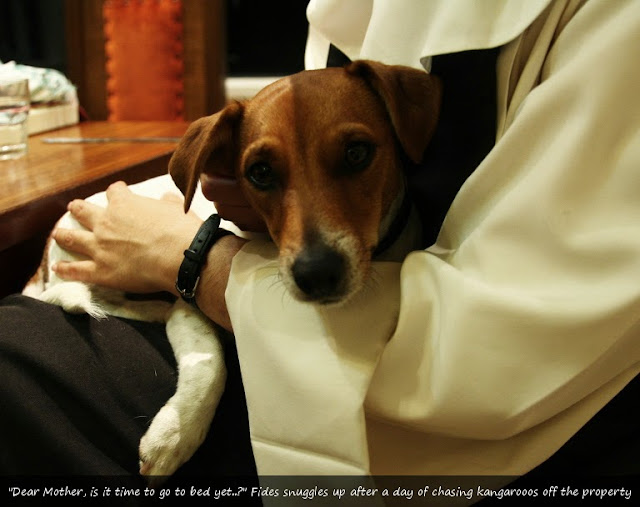 Posted by The Dominican Sisters of Wanganui at 4:48 PM No comments:

"St Thomas Aquinas Feast day was very exciting. The juniors (years 7 -9) had to prepare and practise their speeches and the seniors (years 10 – 13) had to prepare debates. We had approximately one week to get ready. It was very stressful and tiring putting it all together. As third speaker I had to repeat the points of the negative side, sum up our team case and end up the whole debate. I was very nervous. My knees were shaking when I got up to speak. My house team Prouille won over all. We all had an enjoyable and intellectual feast day. St Thomas Aquinas, pray for us!"   (a boarder of Signadou) 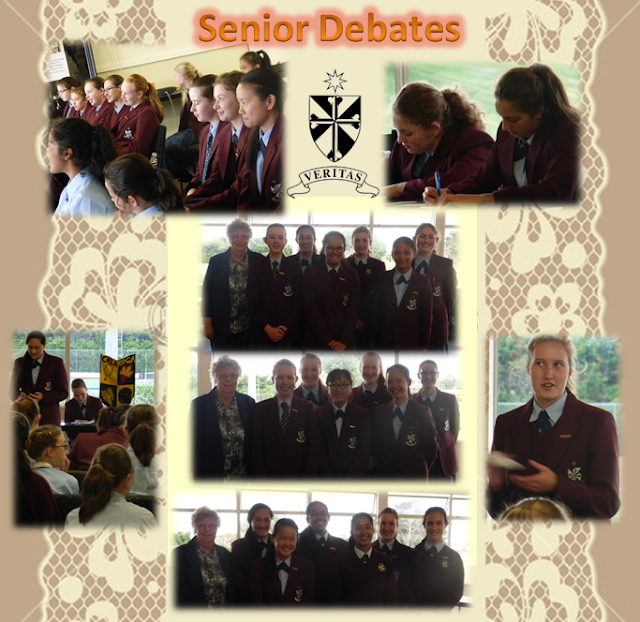 This day was celebrated by debates and speeches which were judged and house points were given.   The speech and drama teacher of some of the girls judged the debates and Reverend Father Bochkoltz judged the speeches.

The debate topics were:
1) Schools should not have a school uniform
2) Catholics should spend less time listening to classical music
3) It is better to watch Shakespeare than to read it
The topic for the junior speeches was “How to become a Saint” - a topic everyone was eager to receive advice on! 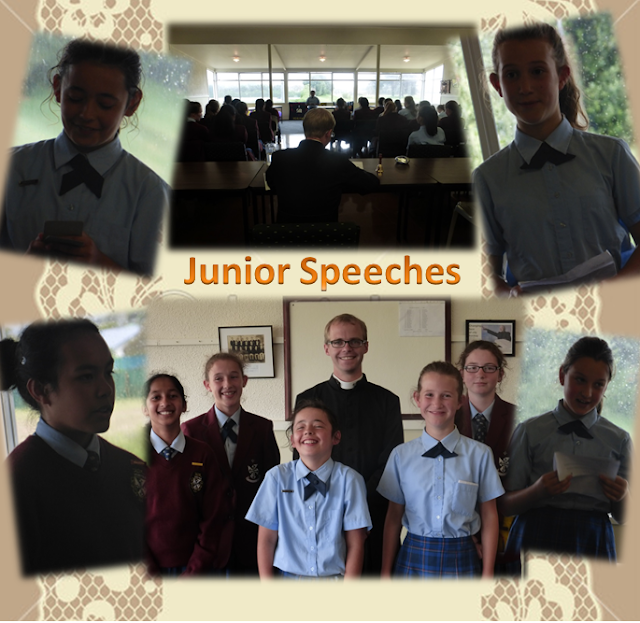 Feast of Our Lady of Sorrows

The school's day of recollection fell this year on the Feast of Our Lady of Sorrows.  It was a perfect day to prepare for the upcoming Holy Week and the priests gave inspiring conferences on the Sorrows of our Blessed Mother, as seen in the stations of the cross. The children also attended a sung high mass, stations of the cross and several rosaries throughout the day.  With the time being spent in silence, it afforded a great opportunity to ponder and meditate upon the sorrowful mysteries. 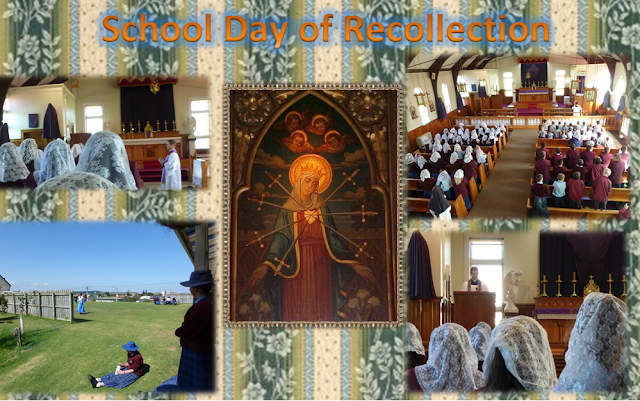 Feast of the Annunciation

On the Feast of the Annunciation, the Children of Mary received many aspirants to the sodality, including several boarders of Signadou.  Following the reception ceremony was Benediction and a sung Mass of our Lady. The girls then happily gathered for a reception afterward. May they persevere in their good intentions! 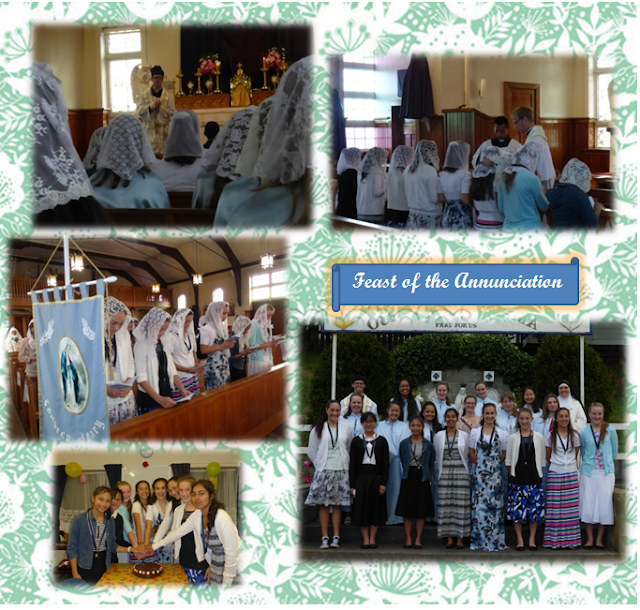 "We were woken at 4.30am by the beautiful National Anthem played by one of the boarding school helpers on the violin. I was pretty excited as it was my first time going to an ANZAC Day Service. ANZAC Day is a day where New Zealanders and Australians come together in their towns to pray for and remember the soldiers that have died for their country in the past wars. There is a march of all soldiers current and old, to a memorial icon called a cenotaph. It is a very special day. By the time we got there, I saw tons of people coming out of their houses looking like they just woke up. There were lots of groups in uniform and we were one of them, proudly representing our school. We finished off by going to Holy Mass."  (a boarder of Signadou) 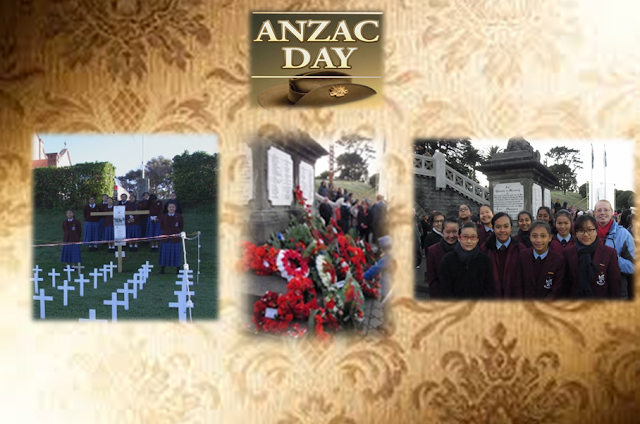 Feast of Saint Catherine of Siena

On the Feast of St Catherine the girls competed in a small inter-house competition. It is a special feast day for the Dominican Sisters and pupils and after the school Mass there was to be a shared lunch for the Feast & Sister Mary Bernard’s first profession ceremony. 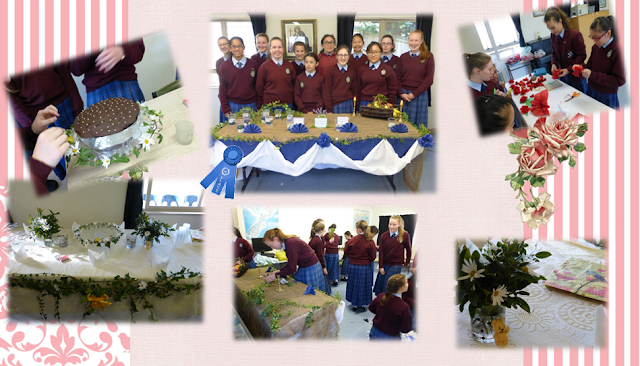 Before Mass the girls divided into their houses and employed their feminine skills in a spirit of teamwork to see which team could produce the most attractive table for the festivities. Each team had to utilize their team colour and so a red (Bologna), a blue (Prouille) and a gold (Calaroga) table appeared after less than an hour. Though it was difficult to judge, Prouille was awarded the first prize for best table and best teamwork, with Calaroga coming in second and Bologna third. 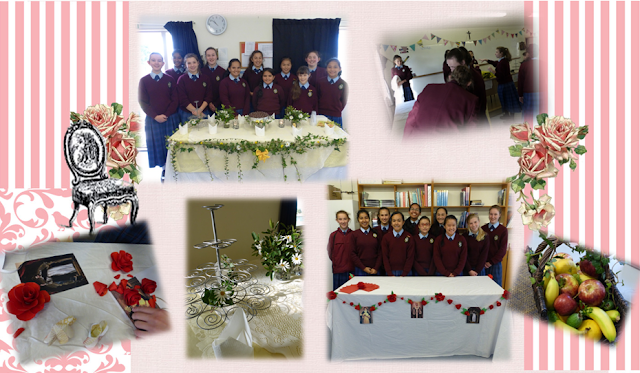 The Feast of St Catherine is a perfect feast for a Dominican religious profession to take place upon. St Catherine is an incredible saint, who received the crown of thorns, the stigmata and the bridal ring from Our Lord and she is not only a model for Dominican Sisters, but is also a special patron of this particular congregation.

Therefore it was fitting that our novice, Sr Mary Bernard (who is also the PE teacher for the girls at school), make her first religious vows of poverty, chastity and obedience on this special day.   Mother General came all the way from Australia to receive the vows of the newly professed and the confessor for the sisters, Reverend Father MacPherson, presided over the ceremony and preached a brilliant sermon on the religious life. It was a special event for the students to be able to witness such an important step in the life of a religious and all of the girls were all delighted to give Sister Mary Bernard their affectionate congratulations. 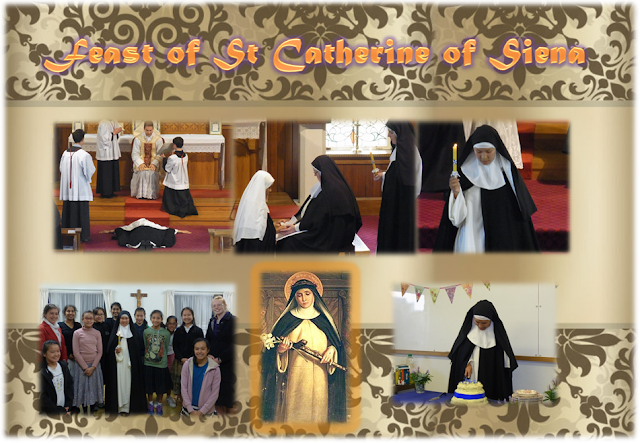 Posted by The Dominican Sisters of Wanganui at 9:12 PM No comments: