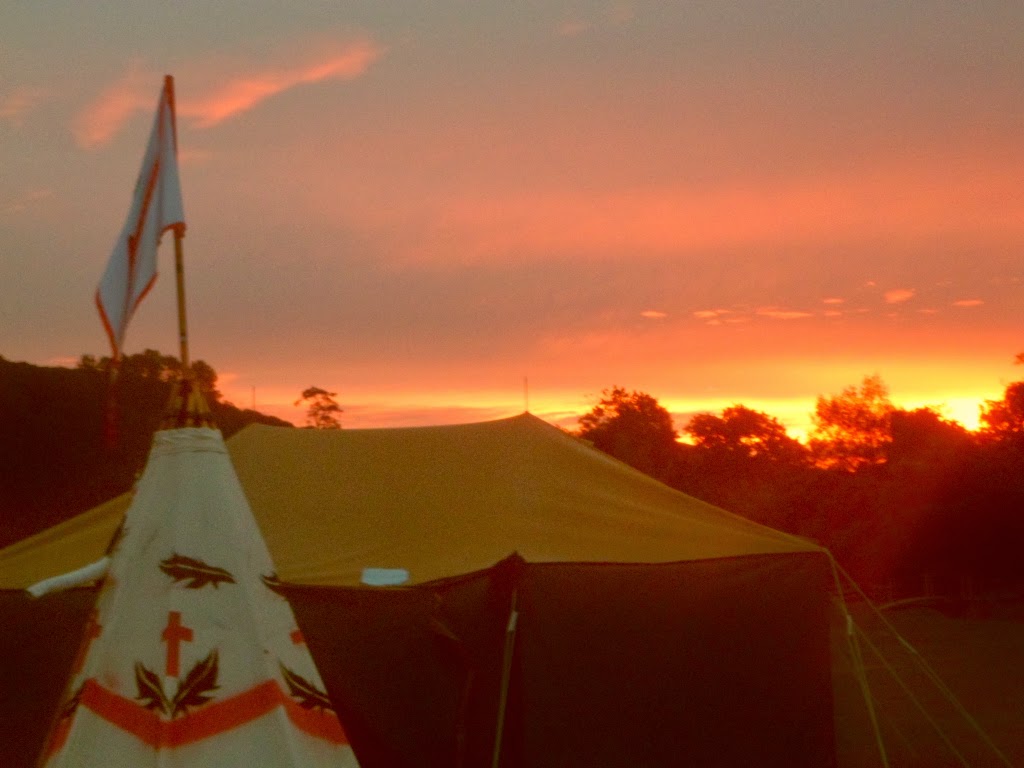 
“You have been called to join the Blackrobe and his white-robed assistants at the Kateri Mission where the North American Wilderness blends with the New Zealand landscape.  It is the year of our Lord 1635 and barbarism still reigns…. "

This invitation to the campers in the flyer for New Zealand’s Camp Kateri Tekakwitha was but the introduction to the life in the wilderness of the American Missionaries into which the camp endeavoured to plunge girls for seven days.

The girls were to set out upon a grand adventure, covering nearly the length of the North Island -1,782 kilometres traveled to be exact - though this is not counting the numerous times the campers got lost and the ever increasing number of U-turns

"To help our girls and young women to develop steadfastness of faith
and purity of life with missionary zeal to extend the Kingdom of Christ." 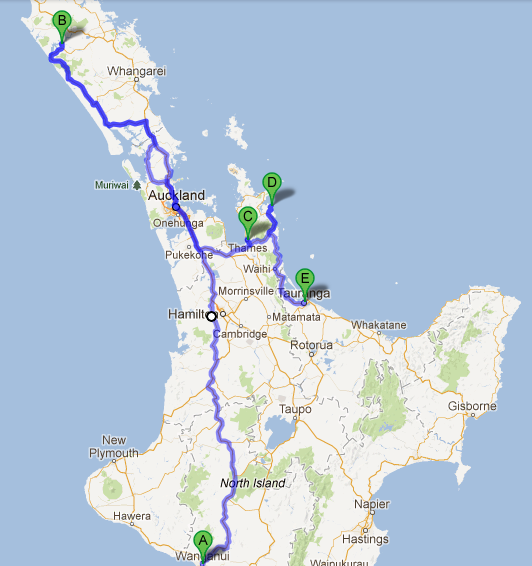 In order to do this, the camp took as its three-fold patrons St Kateri Tekakwitha, Father de Smet, and the eight Jesuit proto-martyrs of North America.  Based upon the lives of these heroic models, the camp determined to give the girls a taste of what life would have been like in the 17th - 19th centuries, where the American Indians were still being converted by courageous souls. Of course, Our Lady was not left out, and since two of her feasts fell during the camp, it was providential that Our Lady of the Immaculate Conception and Our Lady of Guadalupe would be the object of camps' two-fold Marian  devotion. 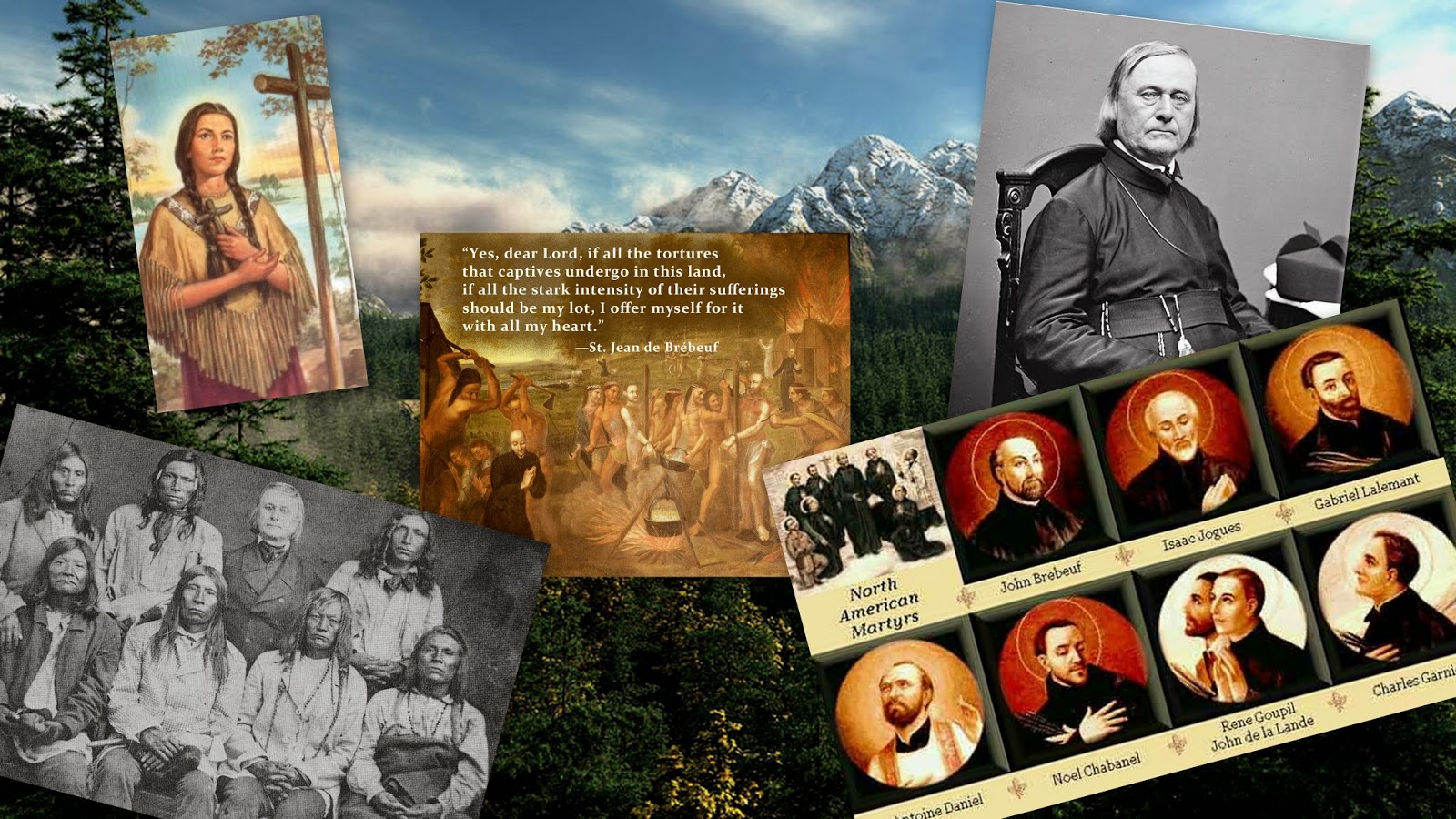 The campers were divided into four tribes, all of which had connection with the camp patrons - the Hurons, the Mohawks, the Algonquins and the Flatheads.  (Father and Sisters did not ‘join’ any one tribe, but rather worked with all four equally.) The tribes worked together, under their generous 'squaw' helpers, to gain competitive points on a variety of levels throughout the camp.  Additionally, at the end of the camp, each of the campers received a certificate awarding them "Most ______ Indian Maiden" with a descriptive adjective based upon their spirits and involvement during the camp.

The campers learned American Indian sign language in their respective ‘ships’ (sailing as the true missionaries would have across the ocean - except for our missionaries, the ships were vans travelling across the NZ landscape…).  The first stop was a horse trek through the wilderness - something that really got the campers into the feel of the theme of the camp.  Each girl rode her own horse up and down steep inclines and through the backwoods. 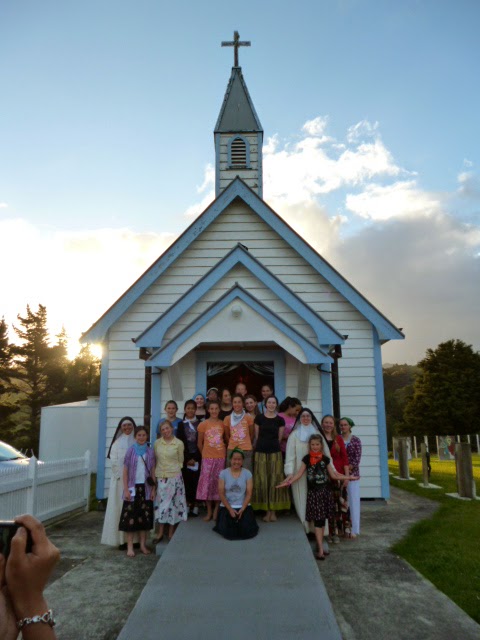 Once the weary campers arrived the first night in Auckland, they were given the once-in-a-lifetime chance to spend the night camping out in the soon to be parish Church.  It was not yet in use and so provided a dry place for the missionaries to sleep.  On the Feast of the Immaculate Conception, the missionaries/Indian tribes trekked to the top of the Island in search of the resting place of Bishop Pompallier.  He was a French missionary to NZ and was NZ’s first bishop.

After a long drive and many U-turns, the girls finally reached their destination and were greatly rewarded with being able to pray before the holy Bishop’s remains as well as touch their rosaries to his coffin. His remains are brought out for veneration only four times a year and we were blessed to be able to visit on one of these days. (Unfortunately, pictures were not allowed of girls in front of the Bishop’s remains, but we took one outside instead.)

After trekking through the Northern wilderness, with an overnight stop at a charitable parishioner’s house, the camp finally made its way to the official campsite in Thames in the scenic Coromandal region.  Large tents were erected for each tribe and the campers were ready with a smile to brave the elements.


“CHEERFULNESS IS THE DISTINCT MARK OF A TRUE MISSIONARY”


The next day was the ‘big hike’ day.  The Pinnacles is a famous hike in the North Island and was well worth the toil and sweat to reach the top.  As the New Zealand Tramper aptly remarks: “ The Pinnacles Track follows the old pack horse trails… over the river and up the valley to the Pinnacles hut… The track was used in the good old days to bring supplies up to the millers and tree fellers, who cleared out hundreds of acres of kauri trees in the valleys. In the late 1990’s, the track (which had become a bit scungy) was upgraded, and rebuilt, close to what it looked like at the start of the century. The result is spectacular . . .  stone steps {big enough for giants’ legs}, wide enough for packhorses, dominate most of the track, crossing the river three times as it rises steeply to logging camp at the ‘near’ top. I warn you now – the stone stairs are great to look at but hard on the legs… From the first swing-bridge, the stone stairs come into play – it will take 1–1½ hrs to leave them and get to the logging camp. It's not all stairs, but they are what you’ll remember most…. Once at the hut {at the top}, you can leave your pack and climb the Pinnacles proper.

Whilst not dangerous, it isn’t for the faint hearted. It’ll only take 45 minutes to get to the top, but you go up some steep rock faces, and several ladders before negotiating a large boulder, to get to the narrow ledge at the top. From the top, you can see both sides of the Coromandel – Tairua / Pauanui on one side, The firth of Thames and Hauraki Plains on the other. The view is breathtaking…”
All the campers made it to the hut (some quicker than others), most continued on to the top of the Pinnacles and were well rewarded with the spectacular views.  The long hike up and then down again, through all sorts of terrain, gave the girls a good idea what it would have been like for the missionaries in the untamed American wilderness.  Indeed, all agreed that this was not a ‘boring’ hike. 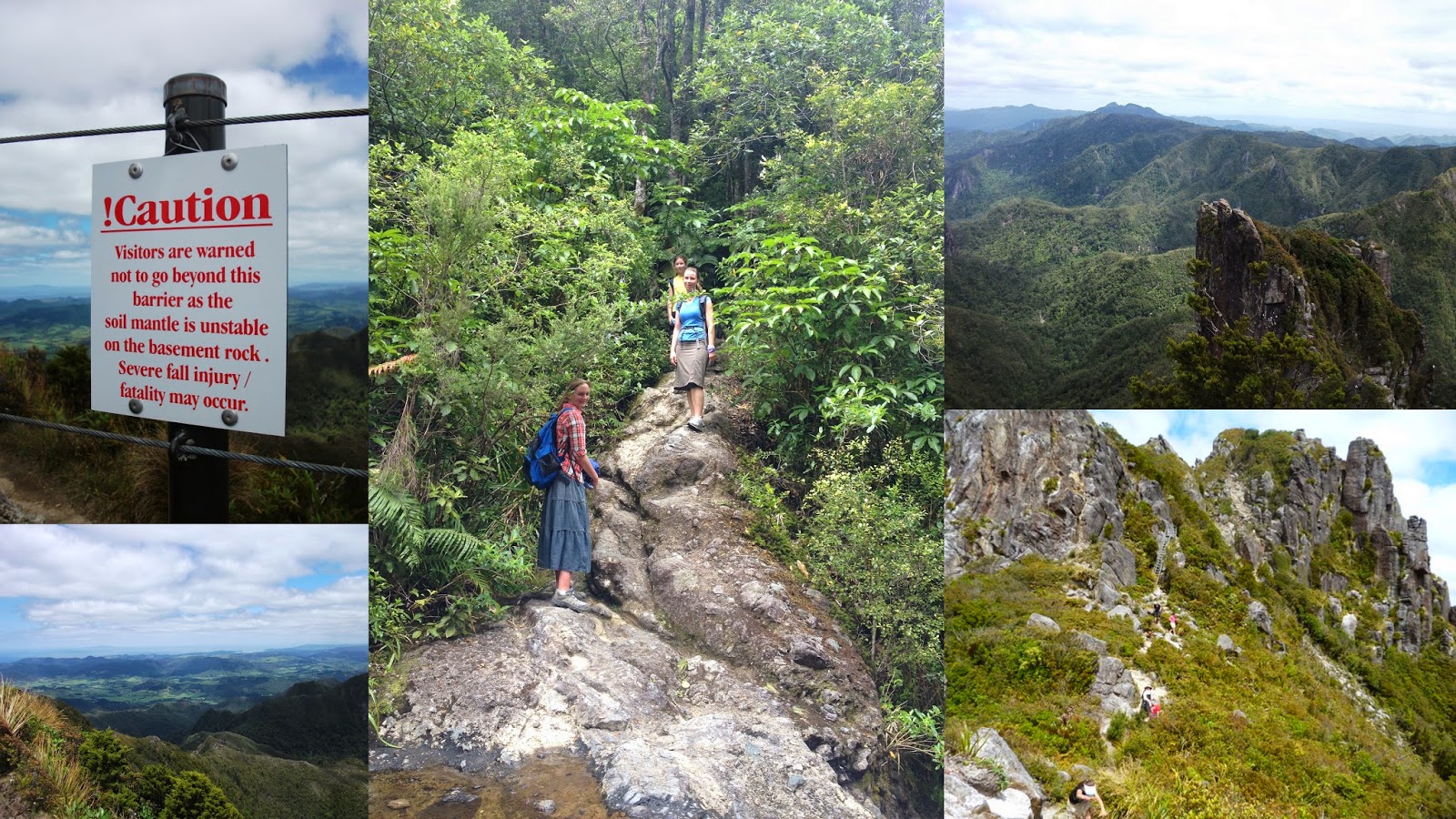 Back at the campsite, the next day signaled the start of activities closer to home. 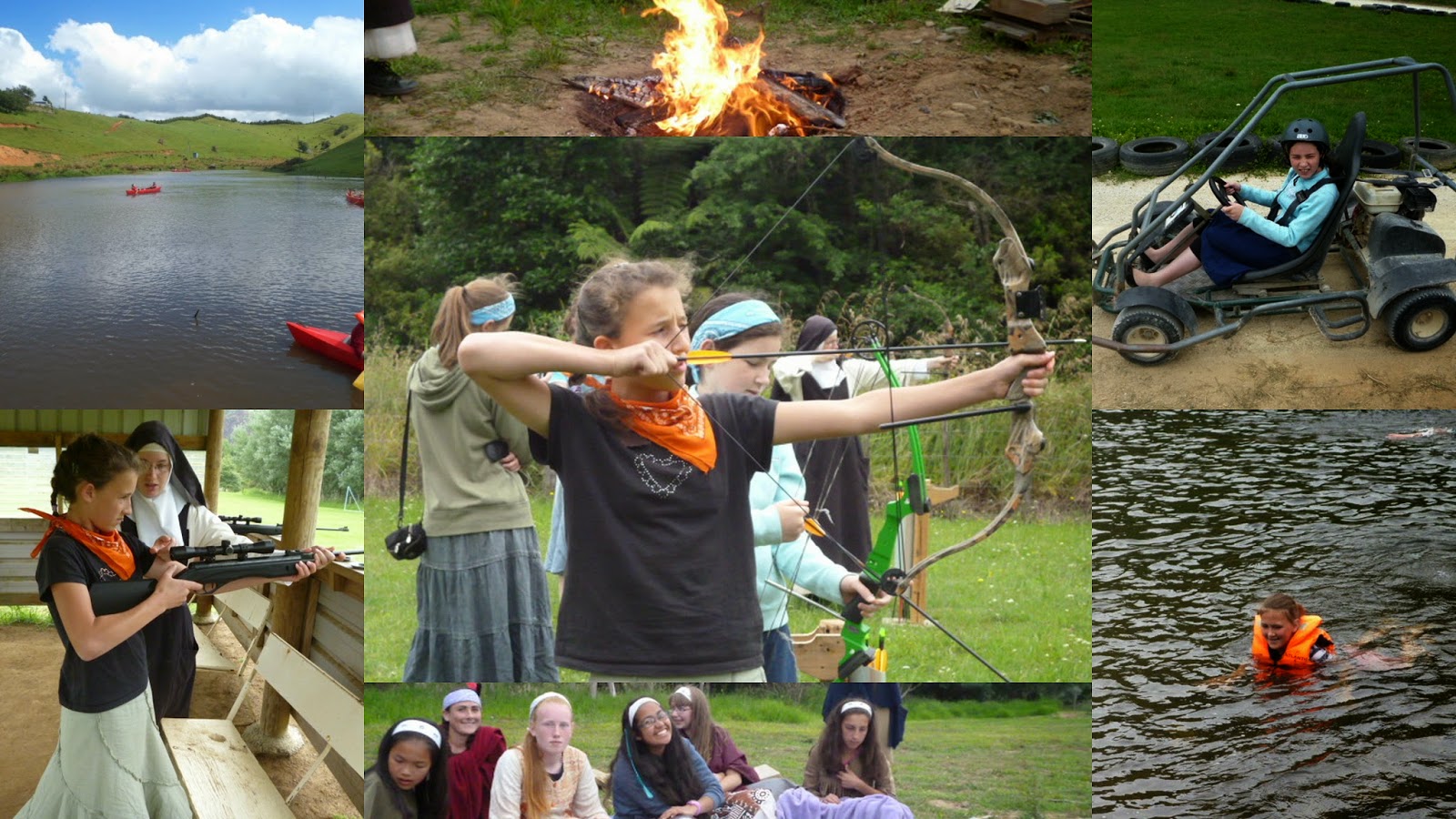 Archery and target shooting reminded the girls about the ‘Wild West’ and kayaking and canoeing gave them a true taste of what travelling would have been like for the early missionaries navigating down the St Lawrence River in Canada. It was made even more like North America when the girls had to climb out of their kayaks and drag them along at different stretches of shallow water in the river, making them reminisce about the missionaries having to carry or drag their boats for miles on end in between long sessions of boating down the river. Our girls, at least, did not have to worry about enemy tribes ambushing them from the surrounding forests.

Campfires, swimming, orienteering, Native American songs and crafts were but a part of the camp routine.  Somehow, go-carts were allowed into the theme one day and so the tribes took turns seeing who could race around the track the fastest.  Our Black Robe sped around with the fastest record, which all the girls then attempted to match or outdo. 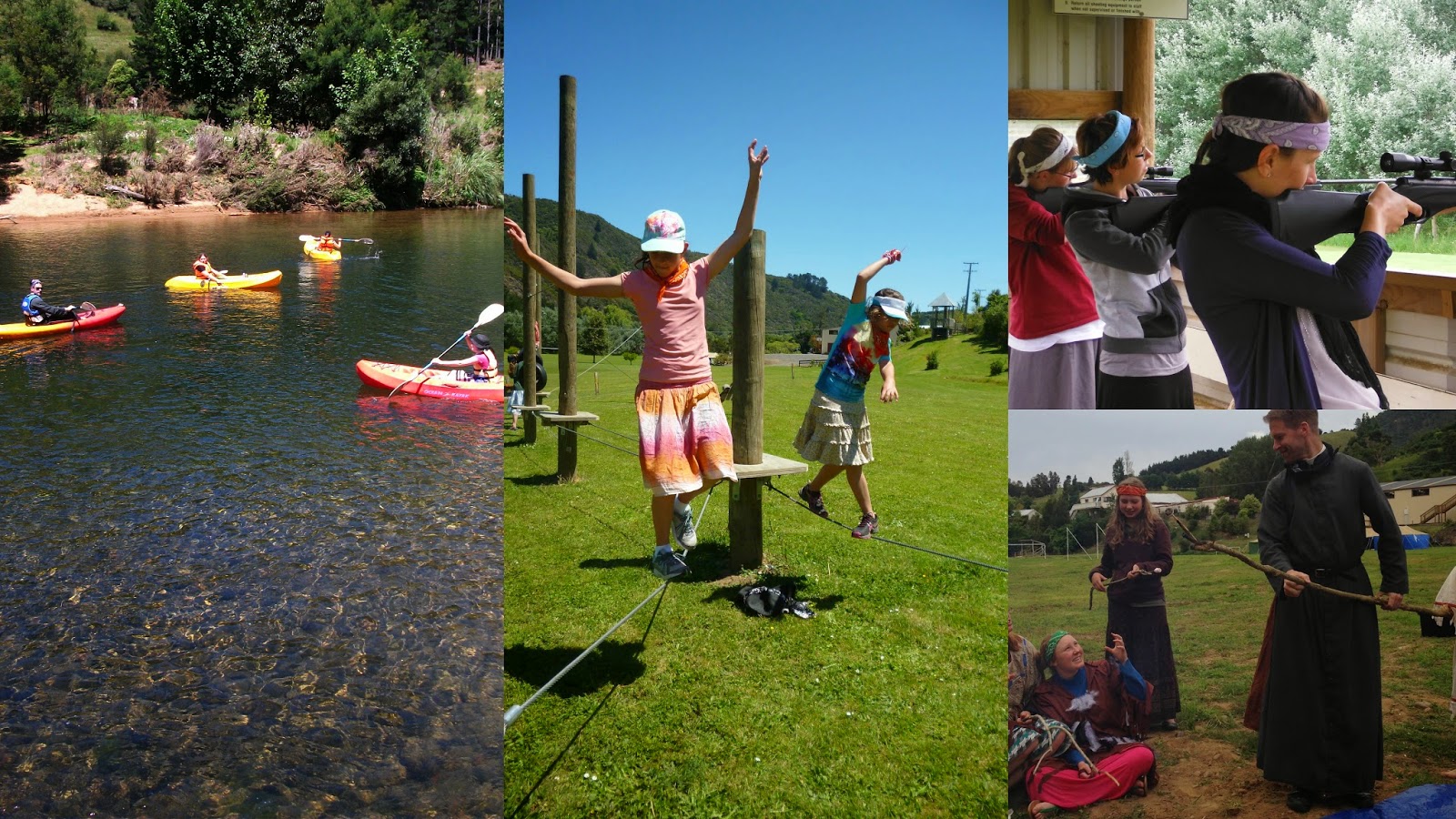 Each morning was begun with the Holy Sacrifice of the Mass, where Father preached a sermon upon the virtue or patron of the day.  After being spiritually refreshed, the campers ate their breakfasts and headed quickly down to the camp headquarters, the uniquely-made tepee, for the daily PowWow.  Here it was that they learned more about the missionaries and Indians from the talks given by their very own Blackrobe and from these talks were given the theme of the day.  Each day was assigned its own theme, its own missionary quote and its own virtue to be practiced. Each evening, for the last talk of the day, the campers all assembled in their home-made Native American costumes, which made the theme of the camp feel all the more real. 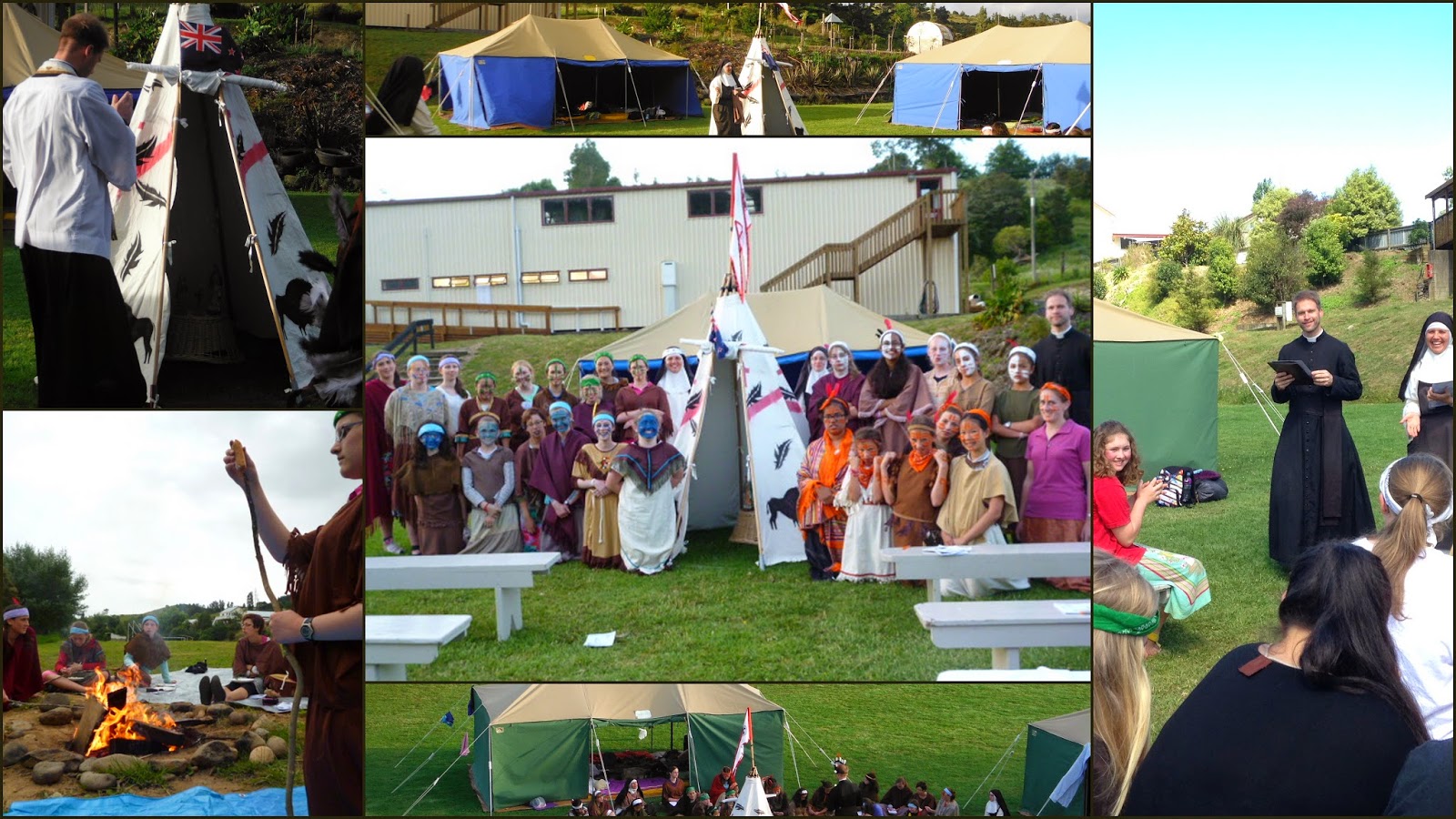 The last full day of camp was one loaded with adventure.  The packed-lunch was much desired after the campers made their way across beach, rocks, rocks (and boulders, and more rocks…), forestry trails, until they finally came to New Chums Beach (voted one of the top ten beaches in the world). 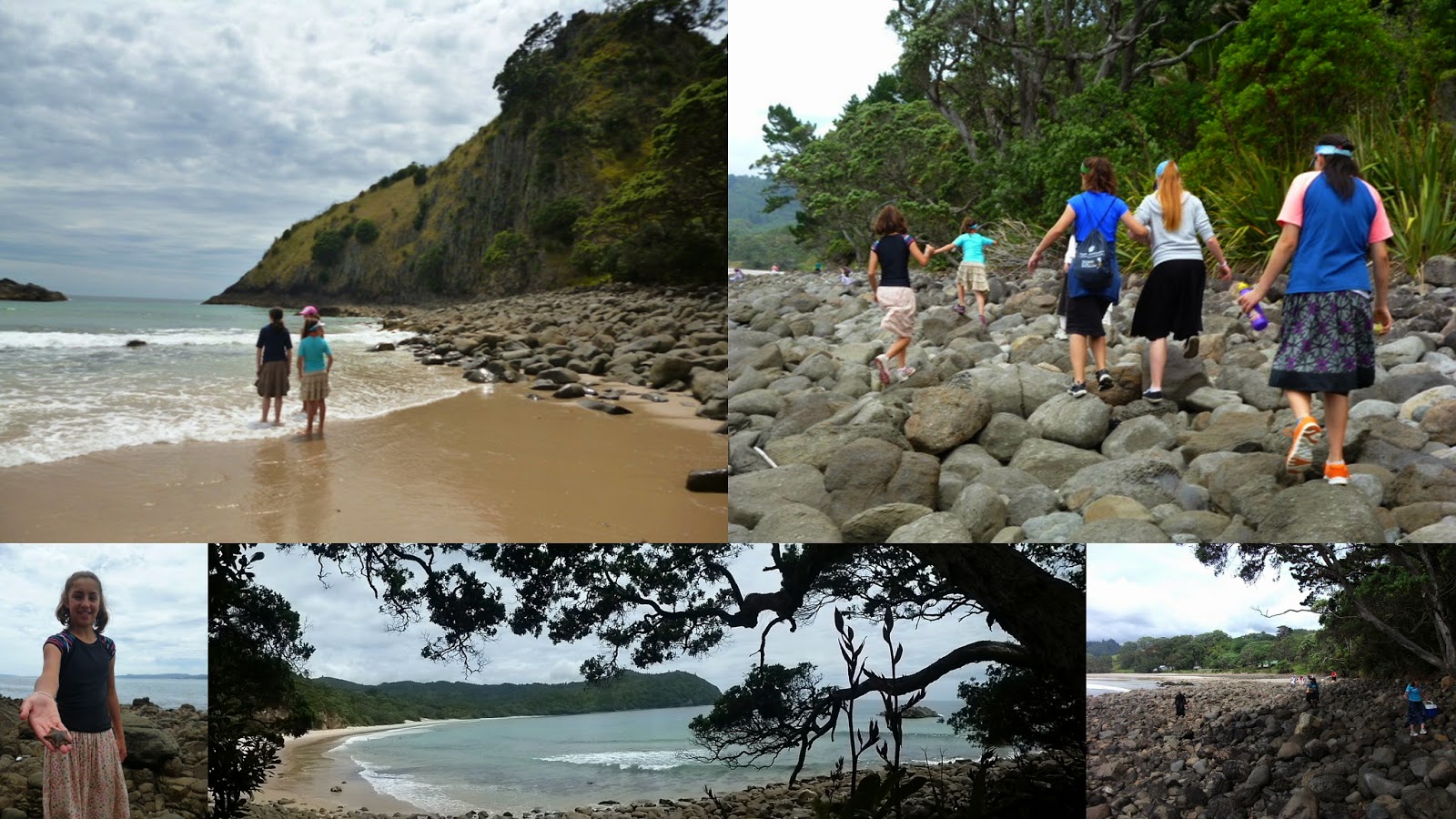 They could not tarry long, though, as boats were especially booked for the afternoon.  The girls gleefully held on tight to their boats as they traversed a water-tour of Mercury Bay, Cathedral Cove (made famous through one of the Narnia movies), Cooks Beach, Shakespeare Cliff, Orua Sea Cave, and the stunning marine reserve in Gemstone Bay. 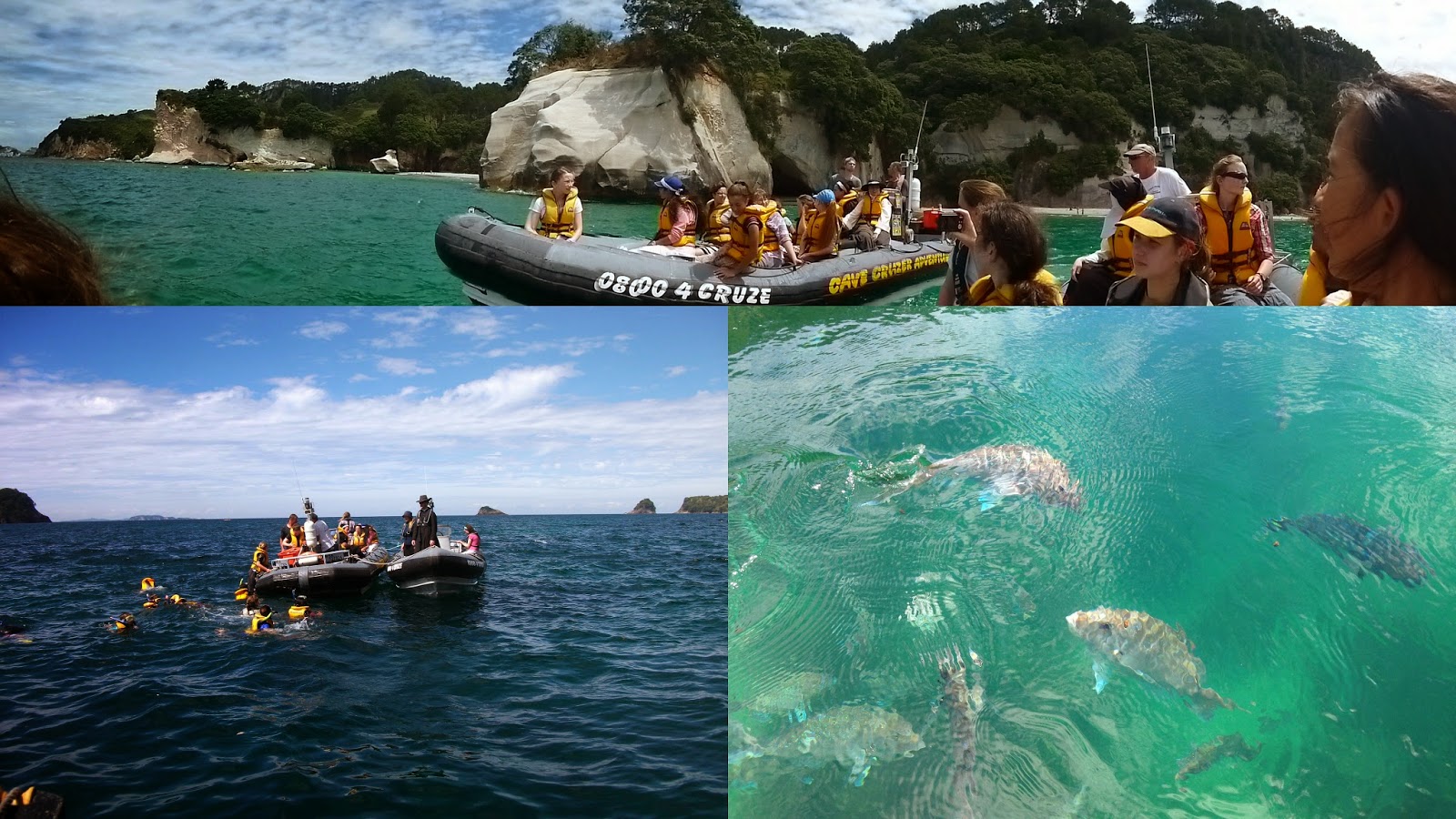 The water was crystal clear, and in the Gemstone Bay, it did actually glitter like gems in the sunlight with a brilliant hue. The fish swam all around as the girls were given a chance to snorkel around the boats.  This was a magnificent way to wind up the camp…. But to the girls’ delight, it was not over yet! 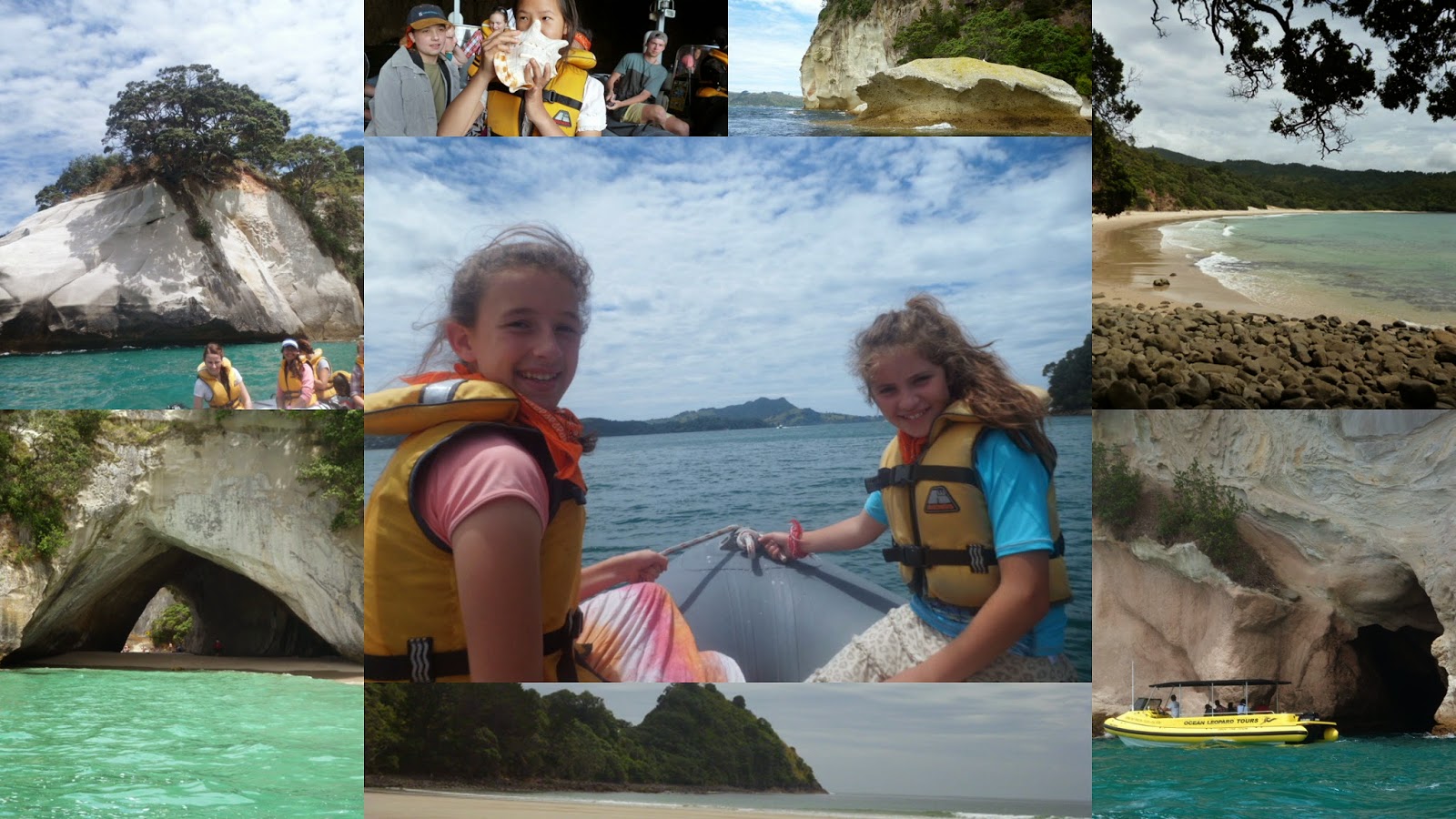 After quite an exhausting day, they returned back to the camp for a relaxing dinner and then prepared themselves for 'late-night' which always closes our camps.  After the sun had set, the girls went through an 'obstacle' course in the bush, blindfolded, which tested their endurance and courage; this was followed with our Blackrobe good-naturedly joining in to play 'spotlight'.

The next morning the camp had to be packed up and tribes prepare for the long trek home.  Even this was not without its adventures.  While on the road, one of the tribes composed a song which we include below.


We Three Vans (to the air of “We Three Kings”) 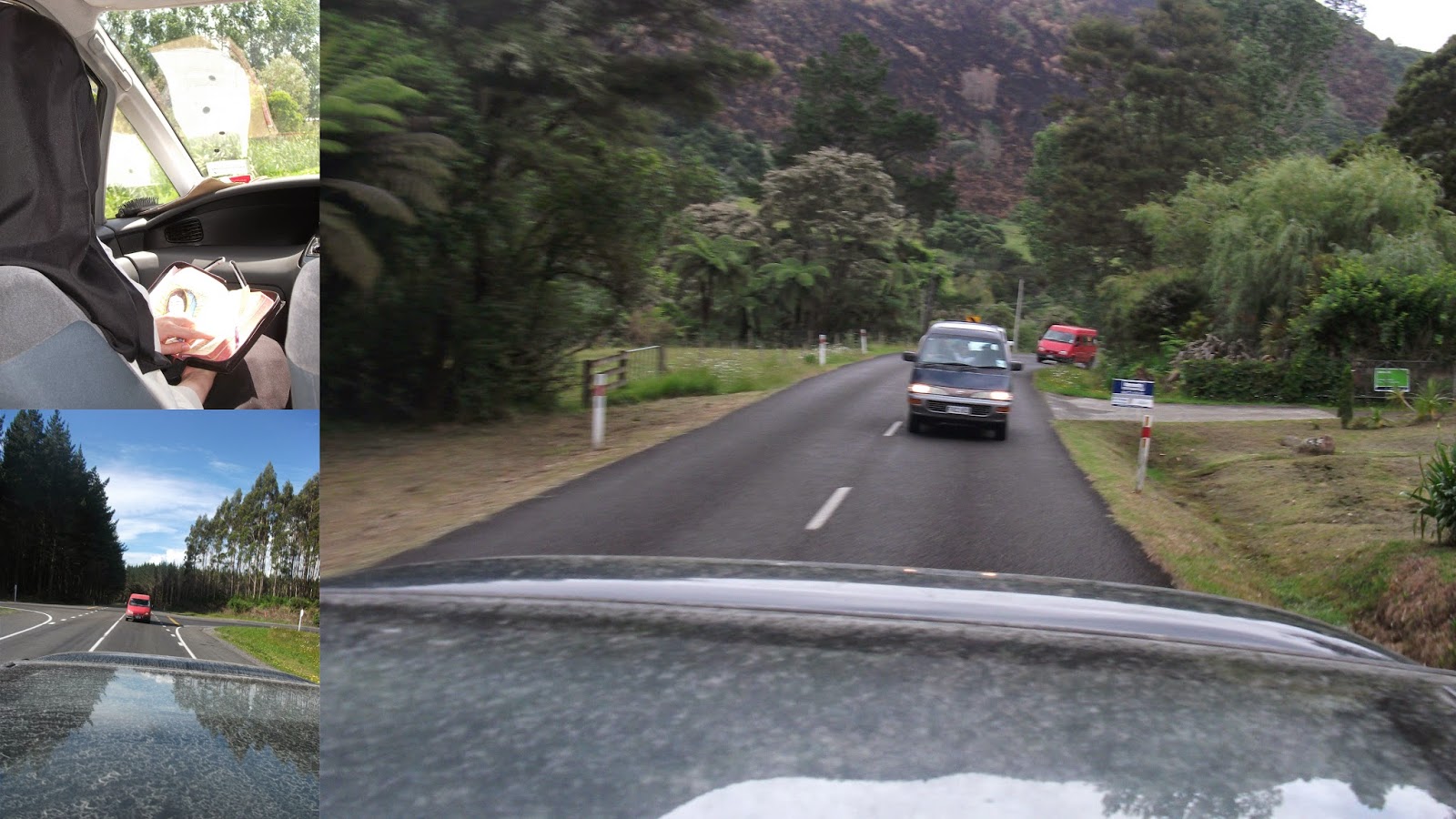 We three vans from Wanganui
Travelling north as missionaries
Over rivers, through the tunnels
Following the Blackrobe

Chorus
Indian maidens that we are
Saving souls from near and far
Northward driving, horseback riding
Bringing the light of faith

Many trials we had to bear
Climbing mountains, sailing through bays
Chainsaws here and ghosts that scare
Challenging our resolve

We have reached the end of the road
Some will have much further to go
Over oceans, through the air
To more distant lands 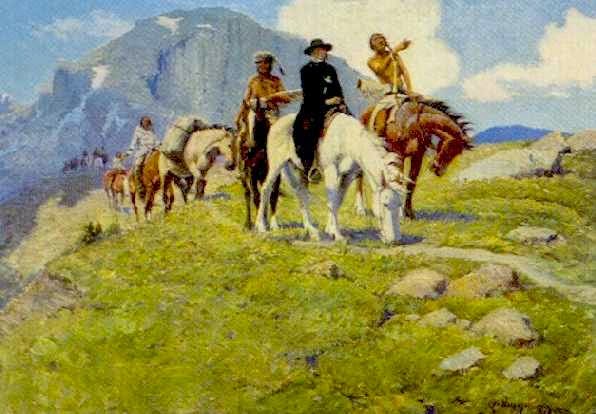 Camp Kateri Tekakwitha ended as it began, with joyful hearts and good spirits.
Singing rang through the evening air as the vans approached Wanganui at last.

"Who can tell me what is most pleasing to Jesus that I may do it." - St Kateri Tekakwitha 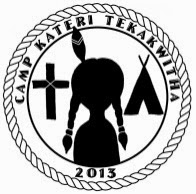 Posted by The Dominican Sisters of Wanganui at 3:54 PM 2 comments: