What has been happening around the convent? 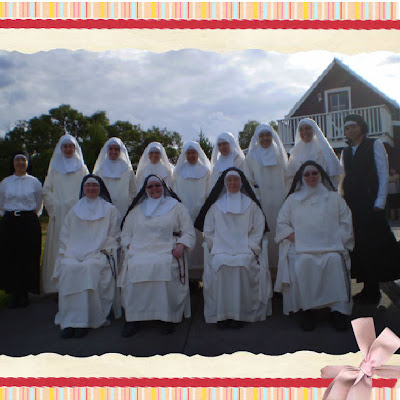 We’ve all been asked by Mother Catherine to write a bit about our ‘new’ patron Saints, so that our readership gets to know a little more about them. I have a considerably easier task than the others, though, because I have a sneaking suspicion that plenty of people already know about St Anne.


I have, as such, decided to fill you in on what’s been going on around the Convent since Christmas, in case you were wondering (because there are many and varied things to speak of, all verifiable by photographic evidence). 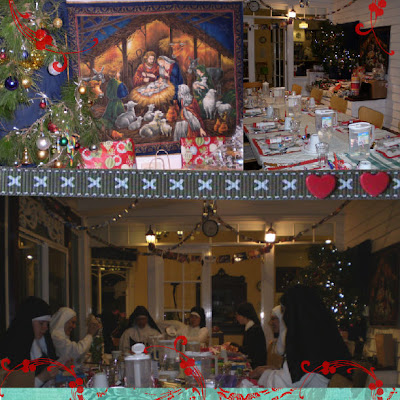 Firstly, the Wanganui Sisters all came over to sunny Australia for three exciting weeks. It was so lovely to have them! As one of the most junior inhabitants of the Convent, it felt like I’d suddenly acquired 8 ‘big’ Sisters who just happened to be away from home for a while who all knew how to look after their poor little Sister. (Especially when she was wearing the Holy Habit for the first week! You would be surprised at how many things a new Novice can get wrong in that regard…) Christmas with them was delightful, especially when we all sang Christmas Matins together. 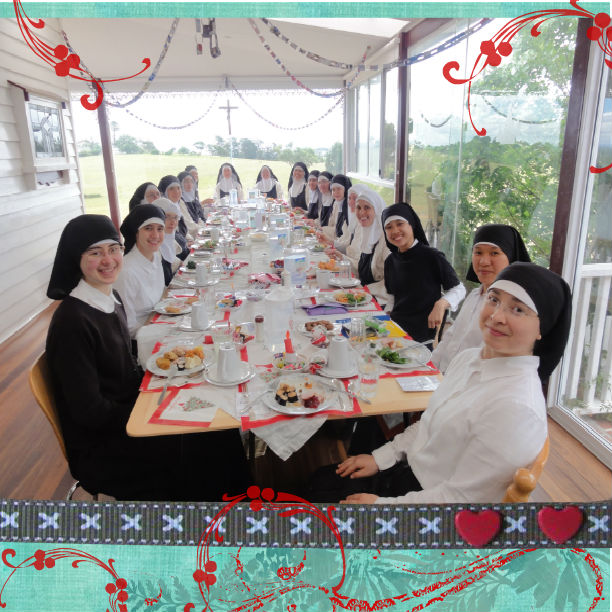 Then, on the Friday, we set off for our secluded, quiet and peaceful retreat destination – Pallotti College. 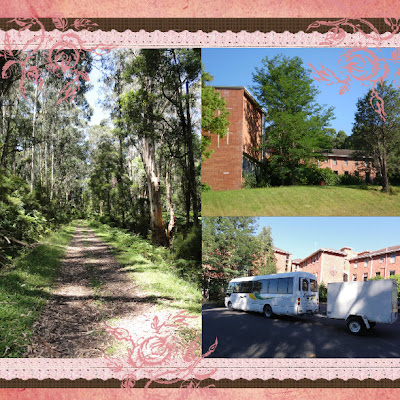 We were privileged to have Fr Pfluger come all the way from Menzingen to preach the retreat, which was brimming with Scriptural references which were cross-linked with a certain Carthusian writer’s thoughts, and included a little of Archbishop Lefebvre’s spirituality on the side, providing much rich food for the soul to digest. 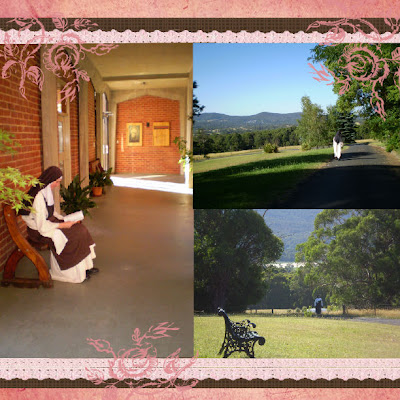 The setting was idyllic, with rolling, tree-covered hills, plenty of paths for one to walk alone and meditate, and even had a little stream that made a gentle waterfall. 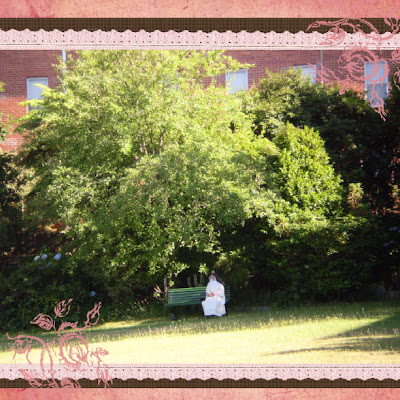 After eight days of this, we returned back to earth. Well, some of us did. The postulants who were to receive the Habit were still on retreat.

I can safely say it was one of the more interesting experiences I have had to be all eyes-downcast-silent-as-the-grave-recollected whilst twenty-seven other people are buzzing about. Twenty-seven? 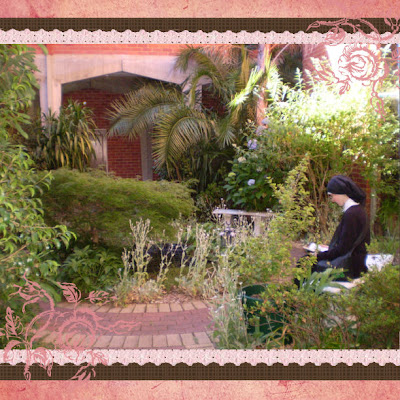 Yes, the count is correct (as they say in operating theatres), because when we arrived back from Retreat, we acquired some special visitors that same day – eleven young American ladies, who had come all the way across the Pacific Ocean to witness the ceremony and to have a little look at Convent life.
Actually, that’s not quite correct (‘Veritas’ must shine through!) – ten young American ladies came to visit. One other one came to stay! This means we have two postulants at present, after four of us became Novices on Epiphany.

On that train of thought, I will simply say that the Feast of the Epiphany was wonderful. I won’t try and write about it, because it is sacred ground and one’s thoughts on receiving the Holy Habit is the kind of thing that loses its perfume when exposed to the air, so to speak. However, we can provide some pictures which will hopefully speak their thousand words’ worth… 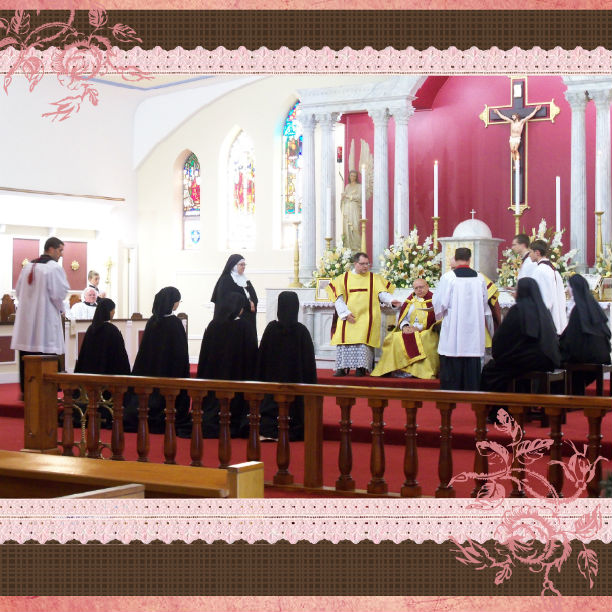 When the postulants return after having put on the holy habit, their hair is cut by the priest. Then the prioress veils the postulants with the white veil... 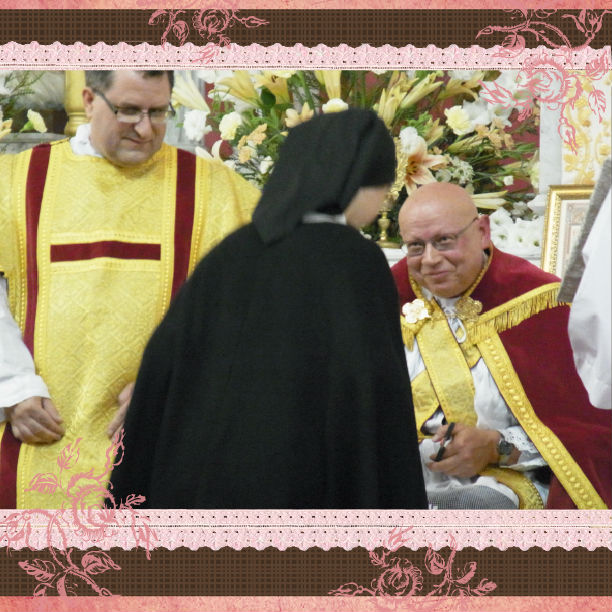 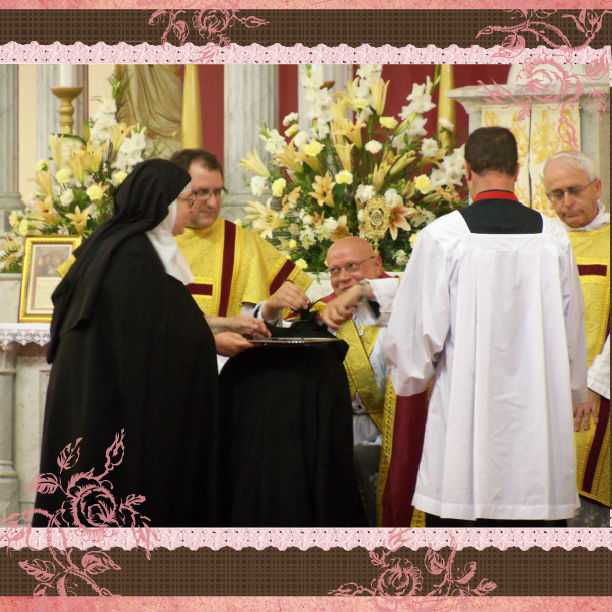 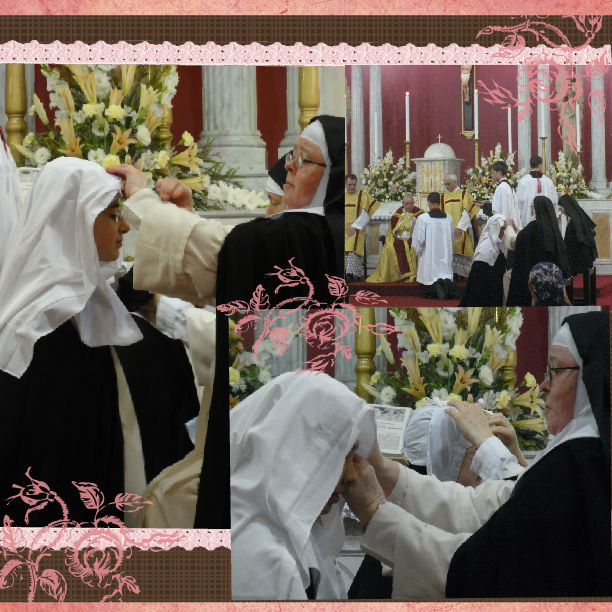 THE CROWNING: "Behold dear daughter, two crowns, one beautiful, the other of thorns. Choose the one with which you wish to be crowned." 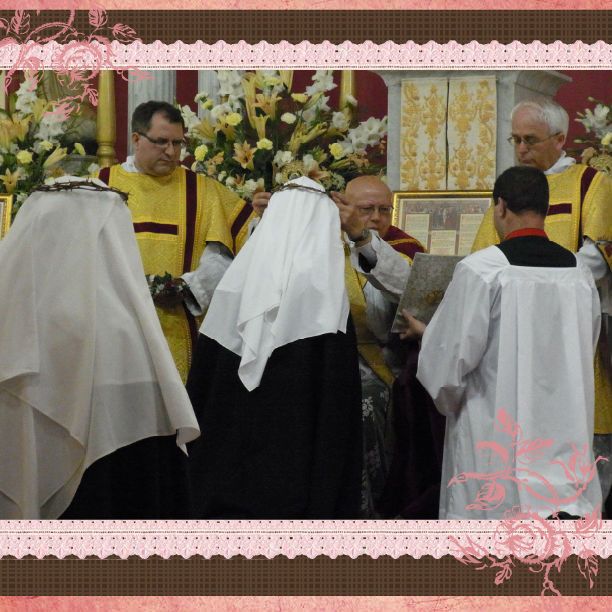 The priest gives to the new Novices, who are kneeling, their Crucifix and Rosary.  THE NAMING: The priest approaches the novices and says: " In the world you were known as: ... In the Order you will be known as: ...." 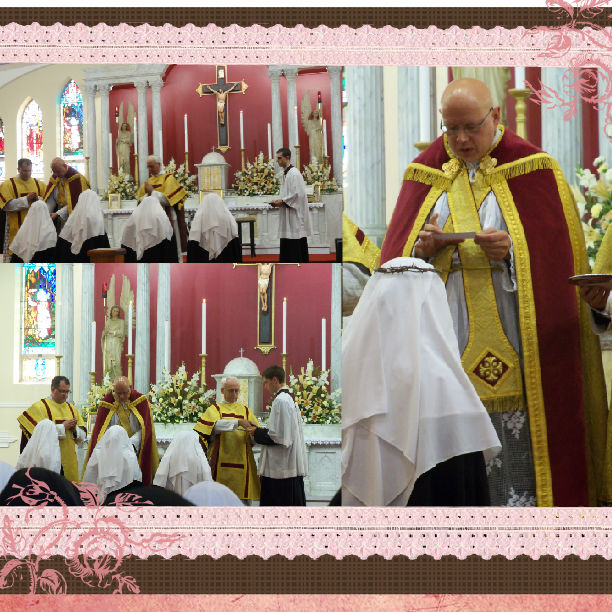 "God, whose mercies are  numberless and the treasure of whose goodness is infinite, we give thanks to Thy most gracious Majesty for Thy gifts to us!" 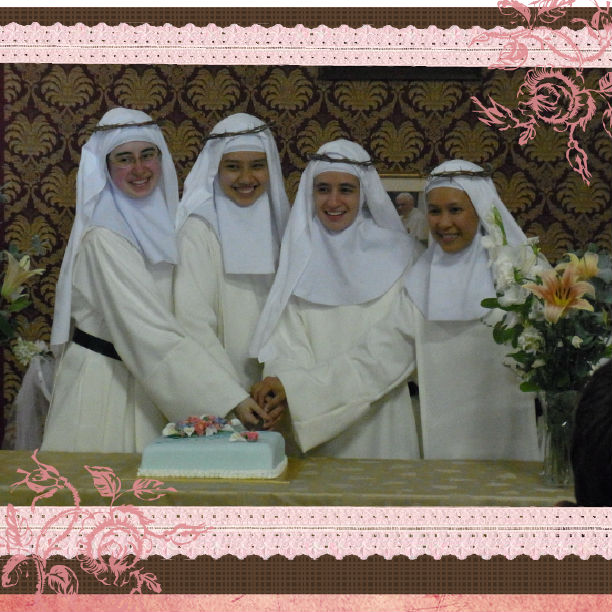 The next week was one of extreme busy-ness. (I don’t think the word ‘business’ would really convey what I meant, so I’ve decided to take a leaf from Dr Seuss here.) Some people had family visiting, so they went on their own adventures for a few days (always back in time for Compline, though!), while the other Sisters spent time with the American girls, seeing all kinds of interesting things. Here are some more visuals to delight the eyes: 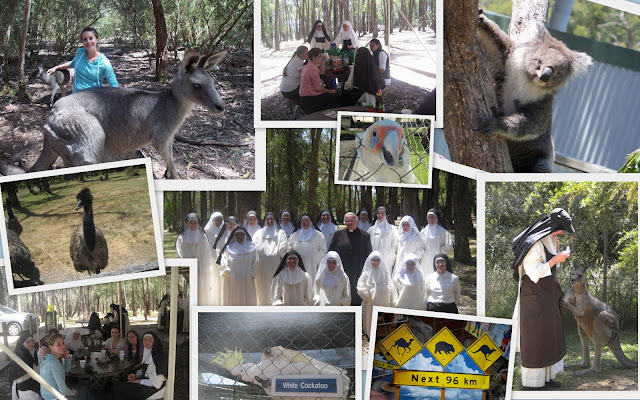 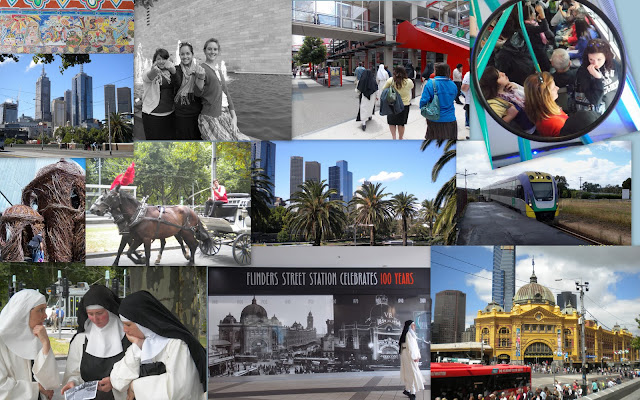 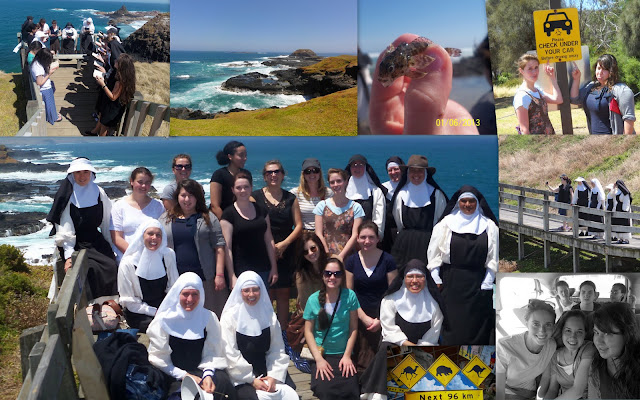 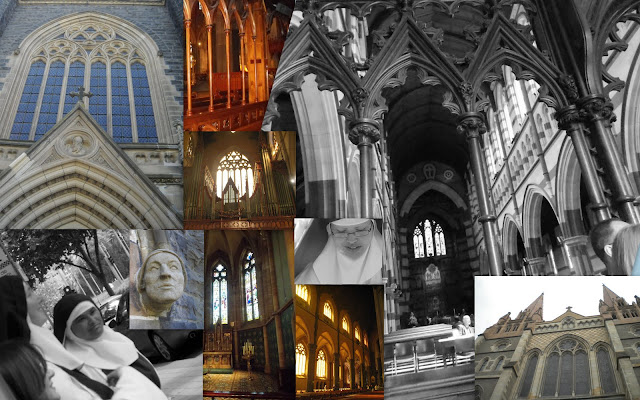 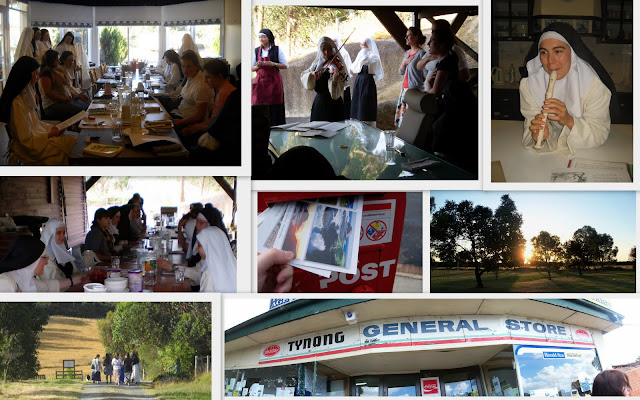 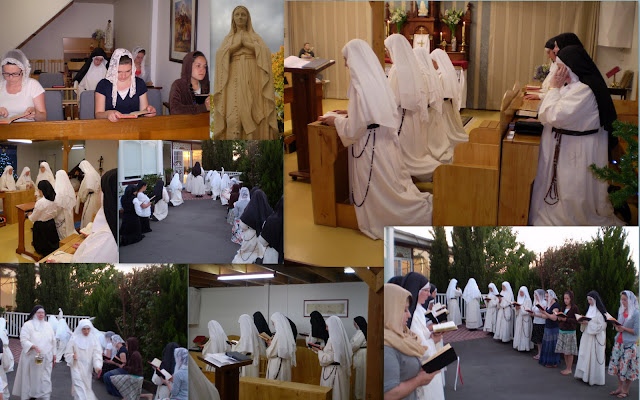 Sadly, the week of fun and festivity had to come to an end, and on the Saturday following the Ceremony we were pared down to 13 here at Rosary Convent, after our New Zealand Sisters and the American girls returned home. 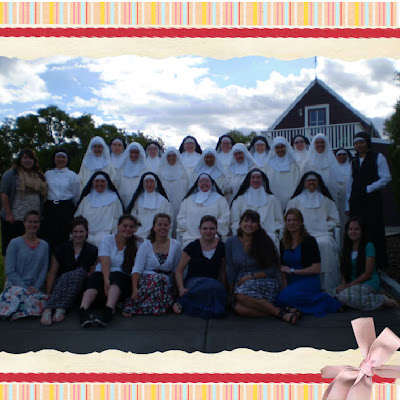 We now face another exciting year (we turned 1 here at Rosary Convent on the 17th of January! Happy Birthday to us!) of educational experiences – which includes classroom teaching for the Second Year Novices, learning the Catechism of the Vows and the Rule and Constitutions for the Canonical Novices, and the new world of Religious life for our new postulants; the purpose and end of all this being, of course, not to fill out our little brains (which certainly does happen!), but to help us know, love and serve God all the better, so that we may grow closer and closer to – and one day be united with – Him.
Posted by The Dominican Sisters of Wanganui at 3:36 PM 2 comments: