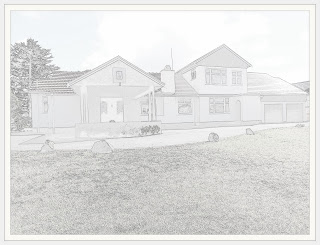 It is with great happiness that we announce that the Dominican Sisters of Wanganui will be opening a Girls’ Boarding School in New Zealand to enable INTERNATIONAL and NATIONAL students to profit from a well-balanced traditional Catholic education under the influence of religious Sisters, while at the same time gaining credit for internationally recognised qualifications. Miraculously we have been able to purchase a large two-storey house with a double section literally right next door to the convent which has much potential for future growth.


﻿ We are now inviting applicants for the start of the 2013 NZ academic year (February 4th - December 6th) and anyone interested in obtaining more information and viewing our Prospectus, is asked to contact Mother Rose via e-mail: sisterrose08@yahoo.com


After much thought and many creative ideas later, Mother General decided to name the boarding school SIGNADOU which means Sign of God, in remembrance of the ball of fire which the Blessed Virgin Mary gave as a sign to St Dominic at Prouille, France, in 1206, on the Feast of St Mary Magdalene. The sign was for St Dominic to begin his apostolate, which brought about the first convent of Dominican Sisters, and after that many others. May it be a sign of many blessings for Catholic children and future religious. 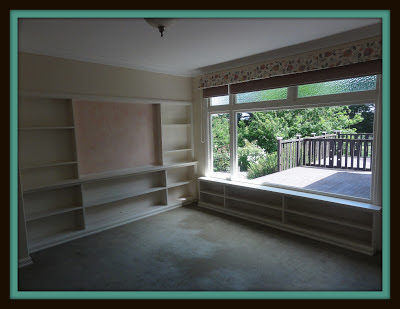 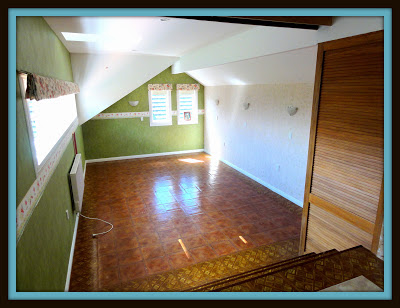 Mission “Secure Convent” became necessary after a long series of incidents and is now in the last stages. Thanks to a very generous U.S benefactor we now have a secure front gate and post-box which serves to connect our present convent with our recently acquired property, giving us opportunity in the future to create resourceful thoroughfares between the two. 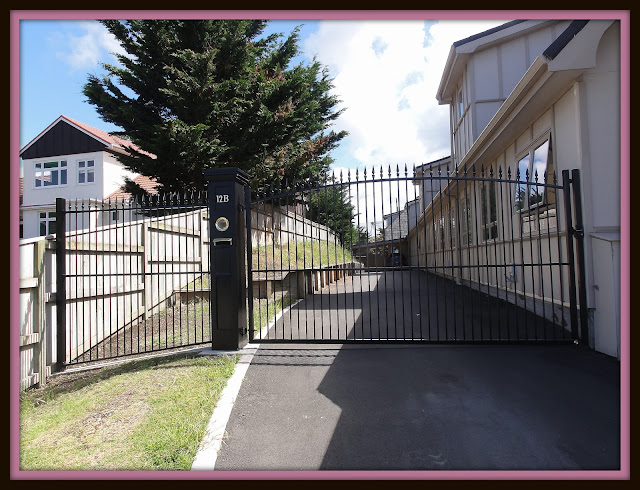 We did have thoughts of putting this sign on the front but thought better of it:

NIGHTLY TRESPASSERS WILL BE PROSECUTED


TO THE FULL EXTENT OF THE LAW


Signed: The Sisters of Mercy

Thanks to the SSPX and working men of our Parish, both young and old, we can now feel secure knowing a wooden fence extends all the way around the front of our complex giving the school girls and Sisters a sense of security and enclosure; moreover, all buildings are now wired to an up-to-date alarm system, and, need I mention, our local 'securityguards' at Wanganui Alarm Watch. 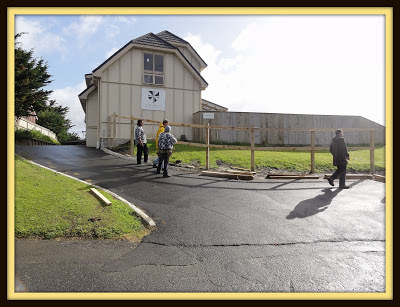 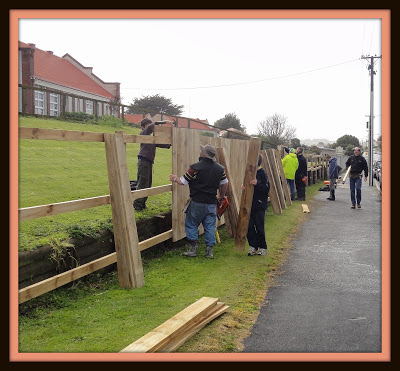 Mission “Signadou” is now in progress, which involves works such as finding furnishings for an empty house, finding good girls for the boarding school, paying off the debt and attending to the 101 legalities required of such a work. If you can help in any way at all with what has just been mentioned, please do not hesitate to contact us. May God reward you - it is a very important work for the extension of His kingdom.
Posted by The Dominican Sisters of Wanganui at 10:16 PM 5 comments:

TIME FLIES WHEN YOU ARE HAVING FUN/Working For The Lord


2012 seems to have flown by. In September we had the honour of our visiting Mother General on the eve of her Feast Day, 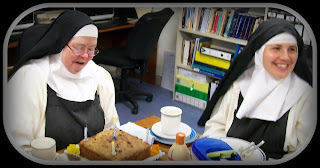 a Children of Mary BBQ for the Feast of the Nativity of the Blessed Virgin, 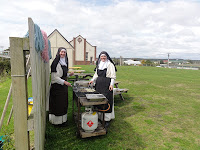 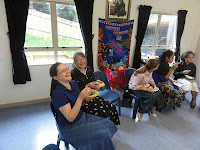 and a community outing which had as an aim – EXERCISE - but in reality, turned out to be a long drive through tunnels, over mountains, hills and plains; on the way passing a vast variety of wildlife on a forgotten highway, only to walk about 20 minutes to NZ’s longest waterfall then jump back in the van again so we could make it back to the convent before midnight. Luckily for us, we didn’t turn into pumpkins.
Photos during our Community Outing
Now we are nearly at the end of yet another school year.  Our senior girls have been studying hard in preparation for their Cambridge Examinations, which they are now sitting and which, unfortunately for them, continue to run through the mid-term holiday break. They have the consolation, however, of knowing that they are candidates at an exam centre which has been passed as ‘completely satisfactory’ by the Cambridge inspector, thanks to our competent Cambridge Administrator.
At the same time, the Form 1 & 2 girls were full of excitement as they prepared to present scenes from "The Wind in the Willows" for their parents and some of the older girls.
﻿﻿


The next day was the feast of Christ the King, and twelve young children received their King for the first time sacramentally, from the Bishop’s hands. After Mass, Anthony’s Parish braved the rain to do public honour to our Lord by a procession through the Gonville streets. The Blessed Sacrament passed over a sawdust carpet beautifully decorated by Brother Andre and his young helpers, around the block, and to the outdoor Benediction altar in front of a parishoner’s house, where a neighbour lady behind us gave her pet dog a running commentary on the proceedings! Then through the Gonville domain we marched back to the church, finishing the Rosary and singing as we went. 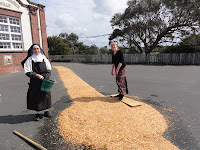 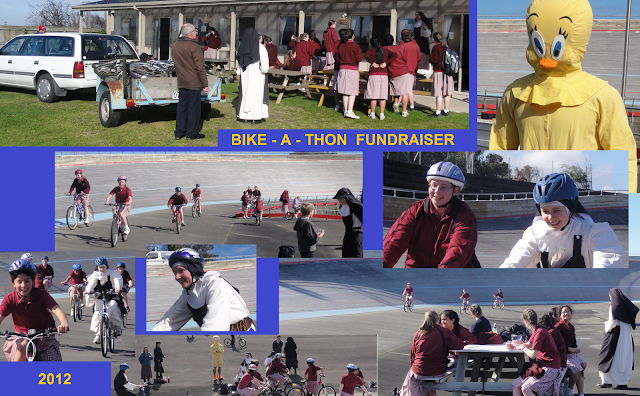 A fierce competition mounted between the Dominican Sisters and the SSPX Priests/Brothers for the title of “Best Fundraiser” and needless to say, was won by the Sisters, with the result that we are looking forward to a delicious meal, home-cooked in the presbytery kitchen, which will be delivered to our door for the feast of All Dominican Saints on November 12!

The students also competed among themselves, and the best fundraisers—both individuals and class groups—were awarded prizes, for example a class trip to a destination chosen by the students. We thank all the generous benefactors through whom God’s providence works for the growth of His sovereignty here in St. Anthony’s parish. 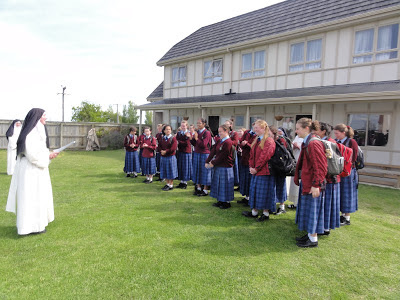 As we near the end of year, a time when blood pressure levels rise as we head into examinations, reports, prizegivings, Final School Masses and this year a 10th Anniversary celebration, we were fortunate in having two well-rounded guests “drop in” one day, which provided much recreation for the Sisters. There is a funny story attached to this visit and details will be revealed at the heavenly nuptial banquet. 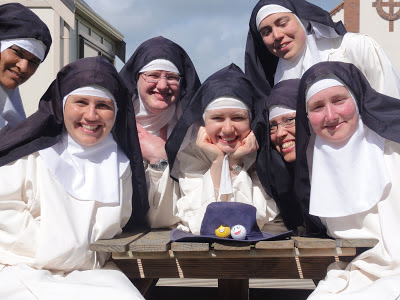 What we CAN tell you is this. Very exciting news will be announced soon by Mother Rose.


﻿﻿
Posted by The Dominican Sisters of Wanganui at 9:47 PM No comments:

November: Month of the Holy Souls

O, what a debt of gratitude we owe God for the merciful institution of Purgatory. He will not cast us away from Him when we arrive travel-worn and sin-stained at the gates of our heavenly Fatherland.  If only we bear within our souls the image of God in Sanctifying Grace, we shall be received with kindness and shall be given the opportunity to purify ourselves completely before entering our happy Home. 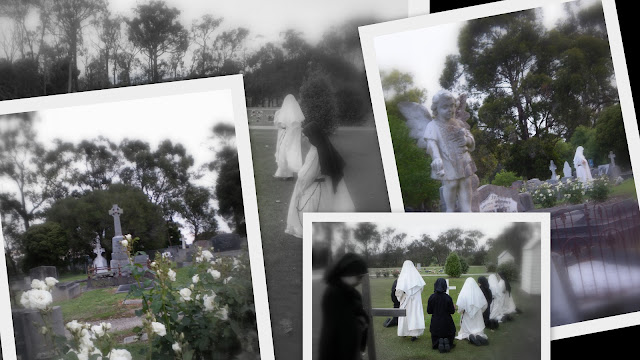 In every Mass that is offered the Church orders a special prayer for the dead.  In all her offices and prayers she remembers them in those beautiful and familiar words “May the souls of the faithful departed through the mercy of God rest in peace.”  Not only that but she has appointed a special day each year on which the Holy Sacrifice is solemnly offered for them and has consecrated the whole month of November, during which period she urges all her children to be particularly mindful of “those who have gone before us and sleep in the sleep of peace.”  They are confirmed in grace, they are “the holy souls” and most dear to God; but they must be cleansed by the purifying fire from every slightest stain of defilement before they can enter into His all-holy presence.
They can do nothing for themselves.  The time of meriting has passed for them.  The night has fallen upon them, wherein, as our divine Saviour said, “no man can work.” (John, ix, 4) They are utterly helpless in their intense suffering, and entirely dependent upon the mercy of God, the intercession of the angels and saints in heaven, and the prayers, alms deeds, mortifications, indulgences and Masses above all, offered for them upon this earth.


If an angel of God went down into purgatory and asked them why they had not long ago been delivered, they might well answer like the poor man at the pool of Bethsaida answered our Divine Master that he had no friend to help him. (John, v) 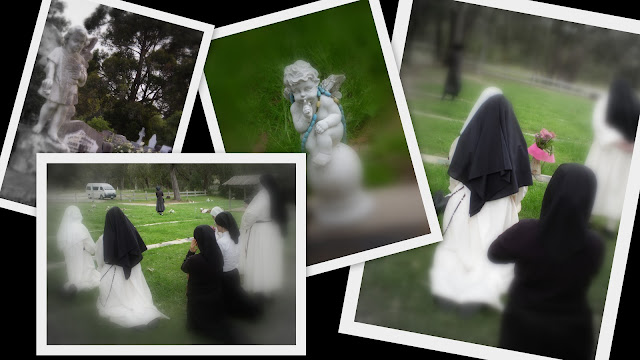 Let us remember those holy souls who cannot help themselves in that prison of purgatory by gaining all the indulgences we can in their favour.  Let us not disappoint them, let us begin today to redouble our charity and loving kindness towards the holy souls.

Posted by The Dominican Sisters of Wanganui at 3:14 PM 1 comment: