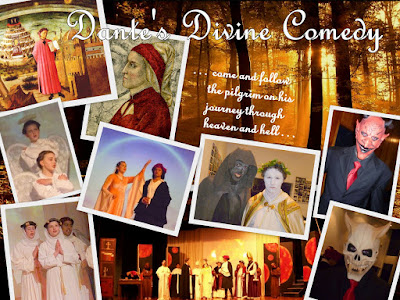 Due to time and other restraints only selected pieces from the Inferno and Paradiso were chosen for adaptation to give the audience a taste of Dante's epic poem. The boys had the task of leading us through hell in the first half of the performance...

ACT ONE ~ THE INFERNO

Behind the scenes with St Augustine's preparing for the Inferno 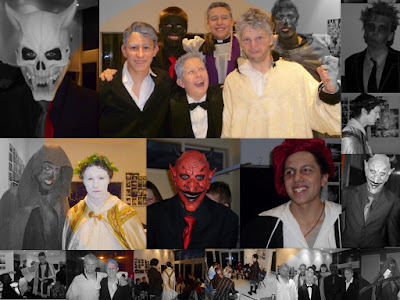 Scene 1: Entrance into the Inferno
Halfway through his life, Dante the Pilgrim wakes to find himself lost in a dark world. Terrified at being alone in so infernal a valley, he knows not whence to turn. At that moment the figure of a man appears before him, the “shade” of Virgil, the famous Roman Poet, and the Pilgrim begs for help. Virgil promises to guide him on the path he must traverse, after which another spirit, more fit than Virgil, will lead him to Paradise. The Pilgrim begs Virgil to lead on, and the Guide starts ahead. The Pilgrim follows. 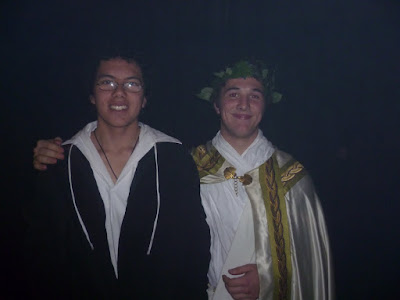 The pilgrim and his guide behind the scenes.

The ensuing scenes follow the spirit of Dante’s vision of the different levels of Hell spiralling downwards, deeper and deeper - each level divided, based on what sins the souls had committed during their lives. In tonight’s portrayal - the different levels are brought to life by sending the Pilgrim, Dante, into different eras of history - while there, Virgil guides and teaches Dante through these “ordinary” events and persons - souls who are rushing to perdition - according to the categories of sins against God, society and self. Virgil instructs his protégé as to why their impending damnation is so, in each passing scene...

Characters from the Inferno behind the scenes 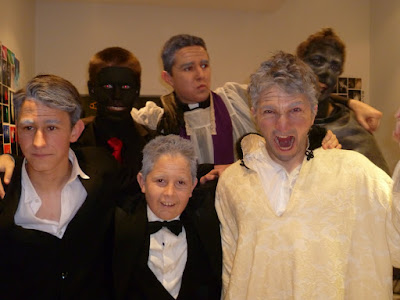 Scene 2: Sins against God
For each talent received from the good God, it must be increased unto His greater honour and glory. Virgil reiterates this to Dante in the modern setting of a young French entrepreneur engrossed in commerce for the sole purpose of making money...

Scene 3: Sins against Society
The setting is a classroom in England during the time of the great 20th century war. They are students filled with rebellion against authority. Virgil will instruct Dante on the children’s calling toward the common good, but diverted instead to a common destructive path…

Scene 4: Sins against Self
Virgil and Dante now enter the German nation at the time of the aristocratic reign. One of these aristocrats, noble by birth, has forsaken his reign for wine, women and song. To discern which of the capital sins imprisons him, is the task which Virgil imposes upon wearied and confused Dante…then the time has arrived for Dante to make passage on his spiritual ascent.

The black-hooded grim reaper from scene 4 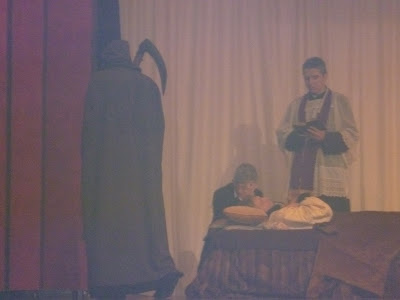 Sound effects, costume, smoke and lights with intermittent choruses of groans and screams, the tumultuous music of Orff from Carmina Burana and the fast moving scenes kept the audience spell bound until intermission. Then it was the girls opportunity to lead the audience together with the poet up higher and higher into the uppermost heavens towards God Himself.

St Dominic's Girls' College with scenes from the Paradiso 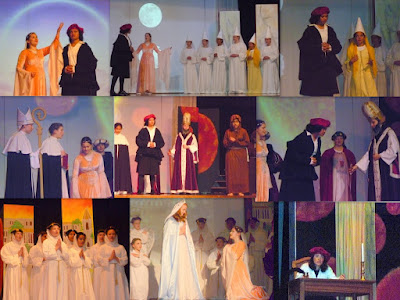 Scene 1: Lower Heavens The Sphere of the Moon ~ The Inconstant After having descended into the depths of Hell, Dante the Pilgrim, who represents every man, made his ascent through Purgatory. This journey, on which he passed through the terraces of purgation, was essential in order that he be purified sufficiently to enter into the realm of Heaven.

Towards the end of his ascent of the mountain of Purgatory, Virgil, who represents human reason, is replaced by another guide, Beatrice, who represents Divine Revelation. This exchange of guides emphasises the fact that human reason is insufficient, and that we cannot enter into Heaven except by the light of faith. 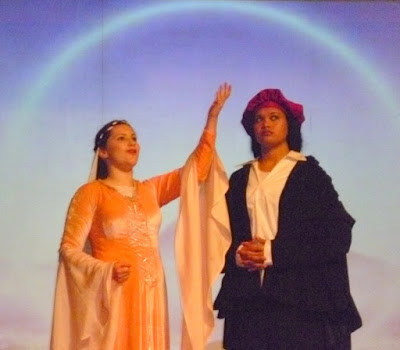 Beatrice and Dante the Pilgrim


Dante the Poet begins by informing us that he has been to Paradise, and has seen things so extraordinary that he cannot possibly hope to tell about them. Having returned from heaven, Dante the Poet overcomes his feelings of insufficiency and, spurred on by the commands of the souls he has met and his own sense of duty to warn, instruct and inspire us, he writes about his journey though nine spheres represented by the planets and other heavenly bodies, which have, at their centre, God – the Source of all Light and Life. As in his previous journeys, the pilgrim encounters a number of souls who teach him that their proximity and the degree of their vision of God is in proportion to their charity, which consists in the union of our will with that of God. 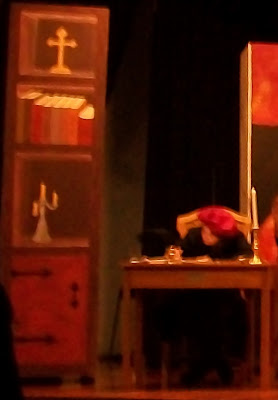 Dante the Poet at work

When they reach the first of the heavenly bodies, the sphere of the moon, Dante sees before him pale, nebulous faces. Thinking them to be reflections, he turns around, but sees nothing. Beatrice, smiling at his mistake, informs Dante that the faces belong to the inconstant – those who made vows to God and broke them. Although they have a place with God in His realm, these souls occupy the lowest position in the hierarchy of Paradise, and they appear to Dante in the lowest of the heavenly spheres, that of the inconstant and ever-changing moon. 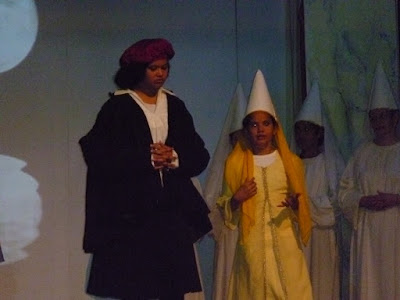 The Poet conversing with Piccarda Donati

One of the souls, Piccarda Donati, a kinswoman of Dante’s wife, explains that she was forced to leave the convent and marry, thus breaking her religious vows, and she did not return when she later had the opportunity to do so. In response to Dante’s question about the desire of souls to attain a higher place in the hierarchy of Paradise, Beatrice urges Dante to listen well to what they have to say, as they are filled, to the extent of their capacity, with the light of God, and therefore perfectly happy and content with their place, albeit the lowest in Heaven.

Scene 2: The Middle Heavens The Sphere of the Sun ~ The Wise 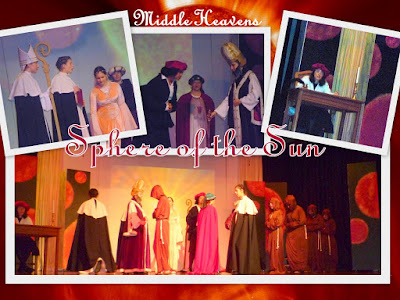 The Pilgrim – unaware of rising there – discovers himself in the sphere of the sun, surrounded by spirits who shine with such brilliance, that is, those souls who, when in the world, illuminated others by the light of their teaching and wisdom.

A group of bright stars appears, representing the two prominent religious orders in Dante’s time – the Franciscans and the Dominicans. St Thomas is joined by other members of the Dominicans, who witness his praise of St Francis and his order. St Bonaventure, on behalf of the Franciscans, returns the compliment, paying tribute to St Dominic. From this, the Pilgrim learns that despite the disagreements that existed between the two orders on earth, they coincide in perfect charity in Heaven, recognising their common goal and rejoicing in the ultimate glory that each has given to God. 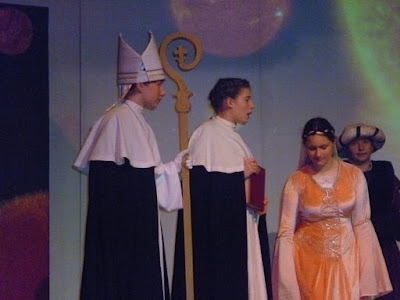 A conversation with St Thomas Aquinas

Towards the end of the scene, St Bonaventure laments the decline in the religious orders, a result of worldliness which smothered the fire of charity and generosity, leaving few willing to follow in the founders’ footsteps. 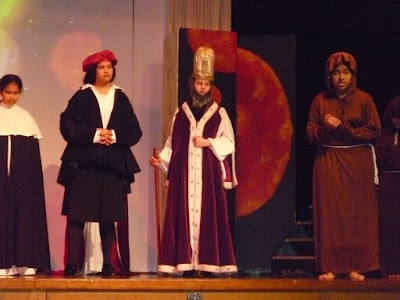 The Pilgrim with St Dominic, King Solomon and St Bonaventure 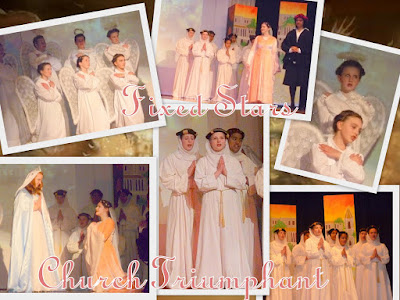 The Pilgrim and his guide are now in the sphere of the fixed stars, where they will shortly ascend to the Beatific Vision. His entire journey, from his descent into Hell until now, has been one of continuous learning, spiritual development and preparation for this final vision. In Hell, he attained a knowledge of his sinful state of self-love and pride, which brought about the necessary humility to start his ascent, and inflamed his desire for greater charity which consists in union of will with God. 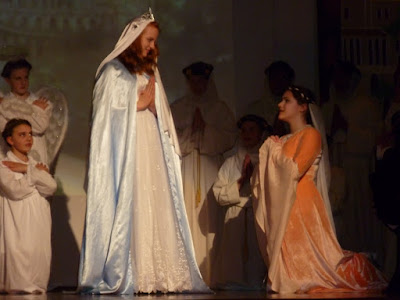 Beatrice asking Our Lady for assistance

In this final scene, Dante the Pilgrim meets the souls who on earth possessed this ardent charity, and finally the Blessed Virgin, who, more than any other, lived in perfect charity and union with God. At Beatrice’s request, she prepares the Pilgrim for the ultimate vision of God. Dante beholds the Trinity under the form of three rings of different colours, all of which share and are bound by one and the same circumference. The Pilgrim struggles by the use of his own reasoning to grasp the vision before him, until suddenly the grace of understanding is given him, at which moment his will is fixed in harmony with Divine Love. 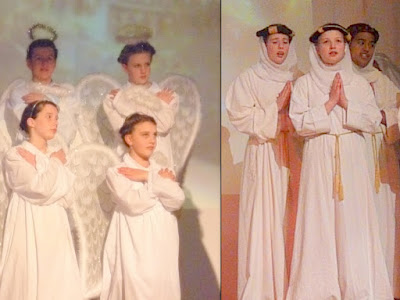 Angels and Saints singing the praises of God

The ending of the Paradiso (and thus the whole Divine Comedy) is rather abrupt. Attempting to reconcile the different views of God, Dante’s mind and poetic gift fail him. The vision of God is linked to squaring the circle, a mathematical problem without solution. In the last line of the poem, the poet finally gives in to the ineffable as he says that his will has become one with God’s. The reader can only assume that the poet was somehow returned to Earth, where he began the task of writing down what he had seen for the benefit of those still living. 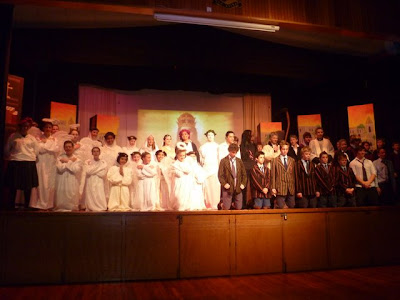 The whole progression was from darkness and horror to light and peace. We pray that all the students involved not only enjoyed participating but will remember the important lessons the Poet taught them as they in their turn make their ascent towards God in the little time given them here below on earth.

Posted by The Dominican Sisters of Wanganui at 3:18 PM 2 comments:

The Paradiso: Behind the Scenes

Posted by The Dominican Sisters of Wanganui at 3:01 PM No comments:

ABC's of Convent Life - by a Novice 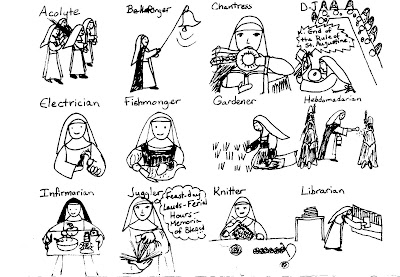 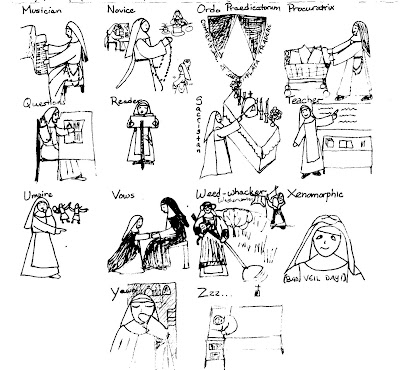 Posted by The Dominican Sisters of Wanganui at 8:35 PM 1 comment: