Every one therefore that heareth these my words, and doth them, shall be likened to a wise man that built his house upon a rock. And the rain fell, and the floods came, and the winds blew, and they beat upon that house, and it fell not, for it was founded on a rock. (Matthew 7:24-25)

As Dominican religious who try to aid the cause of the Catholic Church in her mission to lead souls along the path of salvation, a sound plan of action is needed if we are to succeed in this noble cause for the new year. The apostles who wish to sanctify souls must themselves firstly be closely united with God, for one cannot give to others what one does not already possess. 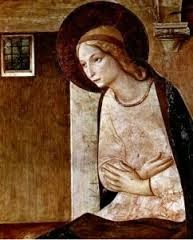 In putting into practice the above words of Our Lord, January is thus a month where our spiritual energies are consolidated together by our annual retreat before being dedicated to God by the ceremonies of clothing and profession. These are then channelled under the direction of our superiors into our apostolate of teaching and prayer.

St Catherine of Siena gives us a beautiful analogy of an overflowing fountain: each religious is a fountain, receiving the water which is Christ through contemplation, and then letting the water overflow onto others through our apostolate. Our prayer and contemplation must come first in our lives because it is only through these means that we can give with profit to those who come to us.

It was then with much anticipation that we looked forward to the first week of January. The three kings who arrived at the infant Jesus’s crib on the Epiphany brought with them to Tynong Fathers Albert and Thomas, two Dominican friars from Belgium who had come to preach the annual retreat and to direct the ceremonies. 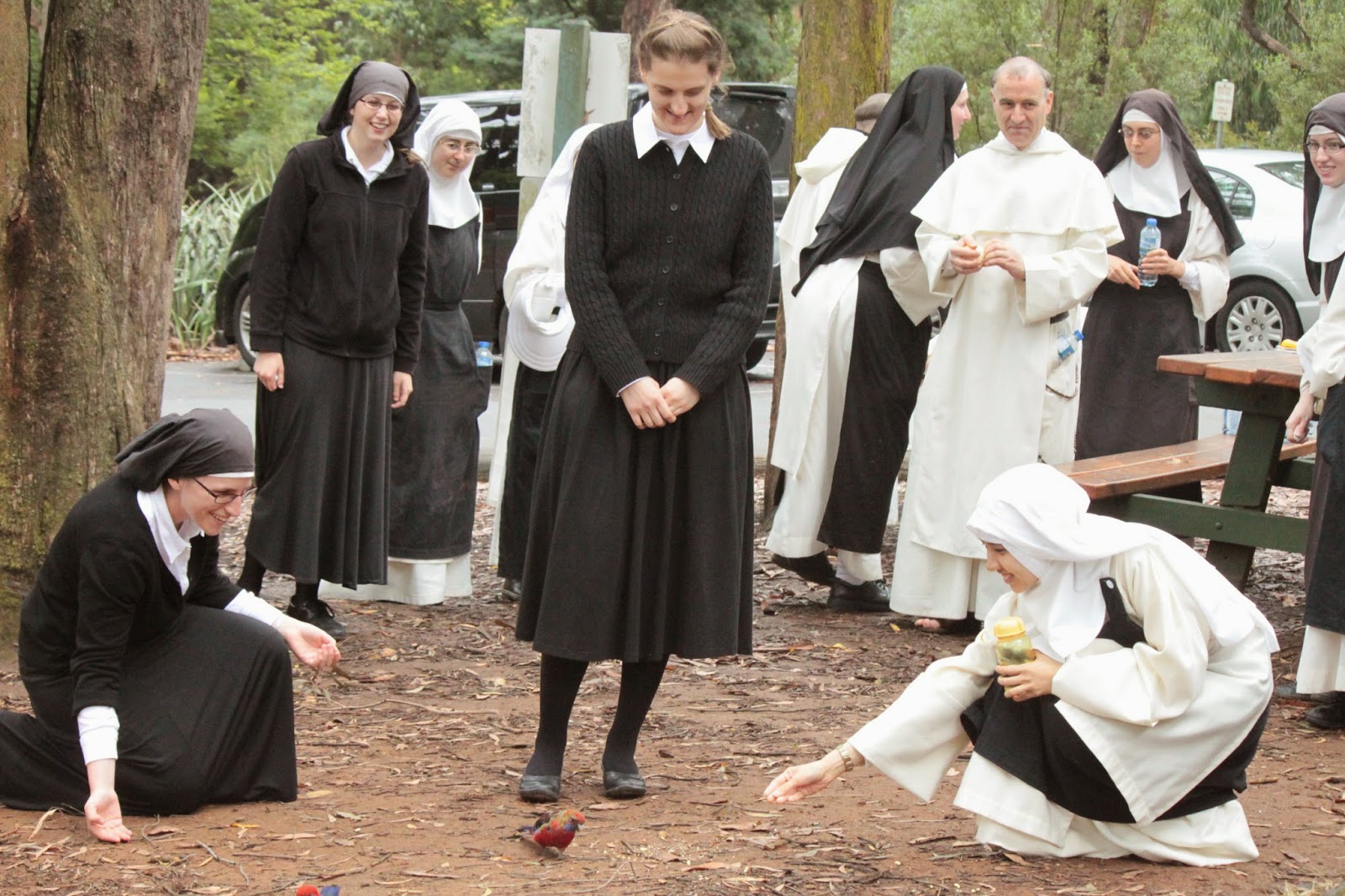 This precious sense of fraternal unity within our Dominican family was further highlighted by the arrival of our own sisters from Wanganui a few days later.

The blessed union of mind and heart in Christ that was promised by the Holy Ghost to brethren who dwell in unity (Ps 132) was experienced sensibly by us, and was nourished especially by our participation in the Dominican rite of Holy Mass (a rare occurrence here!) 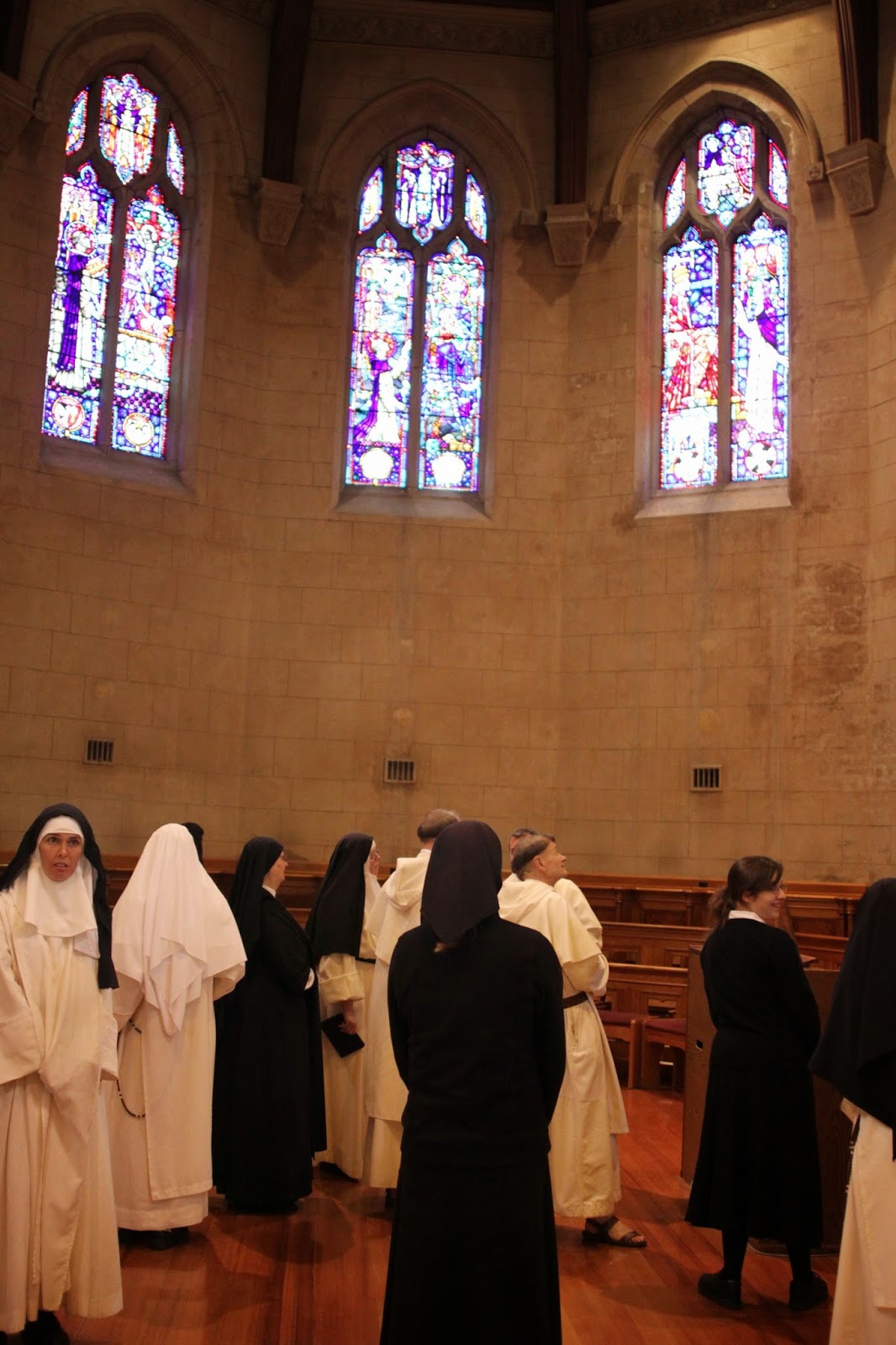 Therefore, behold I will allure her, and will lead her into the wilderness: and I will speak to her heart. (Osee 2:14)

As Father Albert O.P. emphasised, it was necessary to retreat into the desert if we were to hear the voice of Our Lord and respond to Him. The spiritual life, that indispensable and foundational element of true union with God, was chosen as the theme of our retreat from 10 to 18 January. 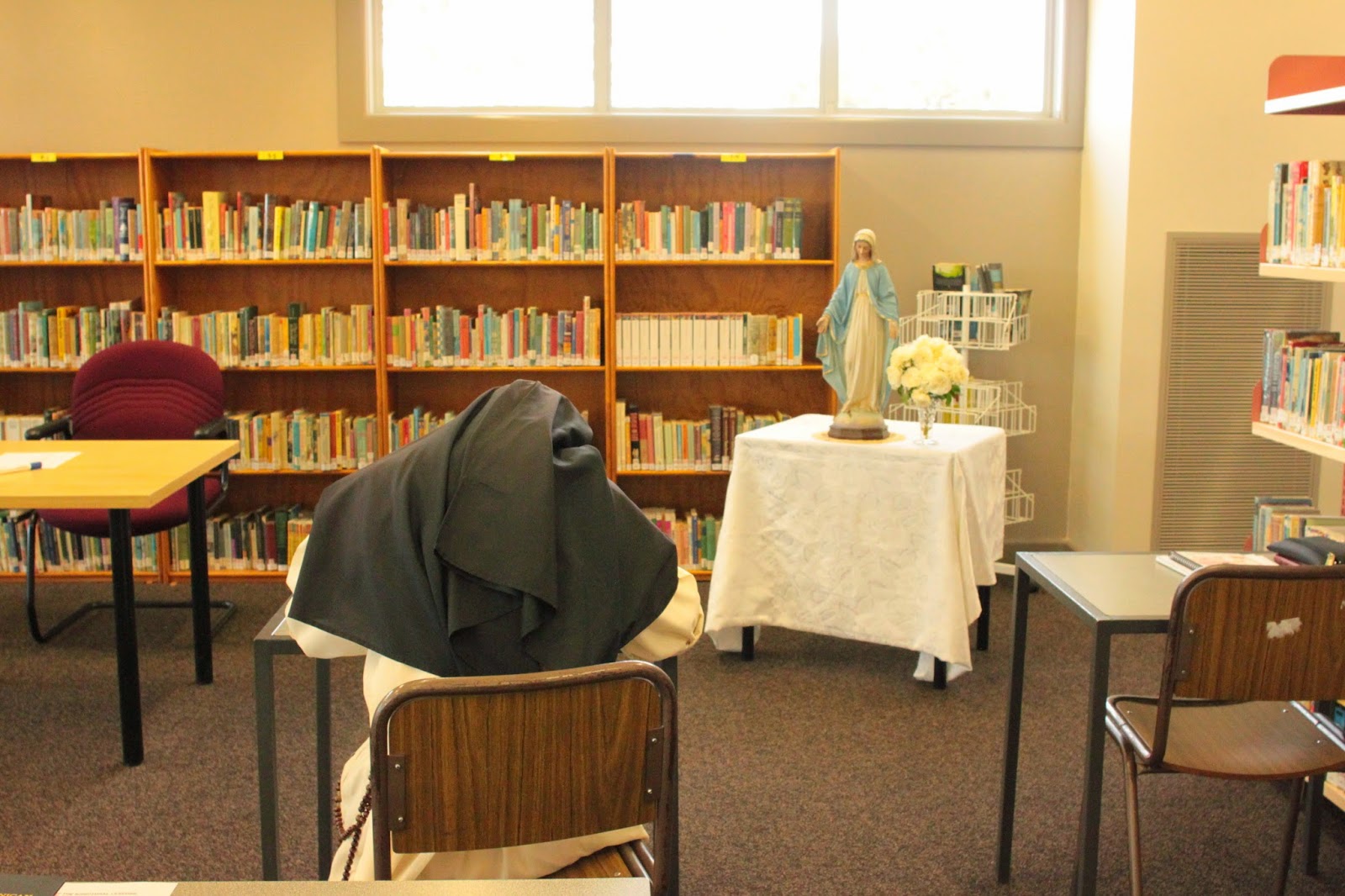 The golden thread linking the various conferences on the Redemption, sin, grace, the Blessed Virgin Mary, the theological virtues, the gifts of the Holy Ghost and the various stages of spiritual progress was of course none other than writings of the Angelic Doctor, notably his Summa Theologica.

Much wisdom was also drawn from a constellation of saints by both friars-- St Bernard of Clairvaux, St Therese of Liseux, St Bernadine of Siena and H.E. Archbishop Lefebvre contributed many of their own examples and works for our edification and instruction. 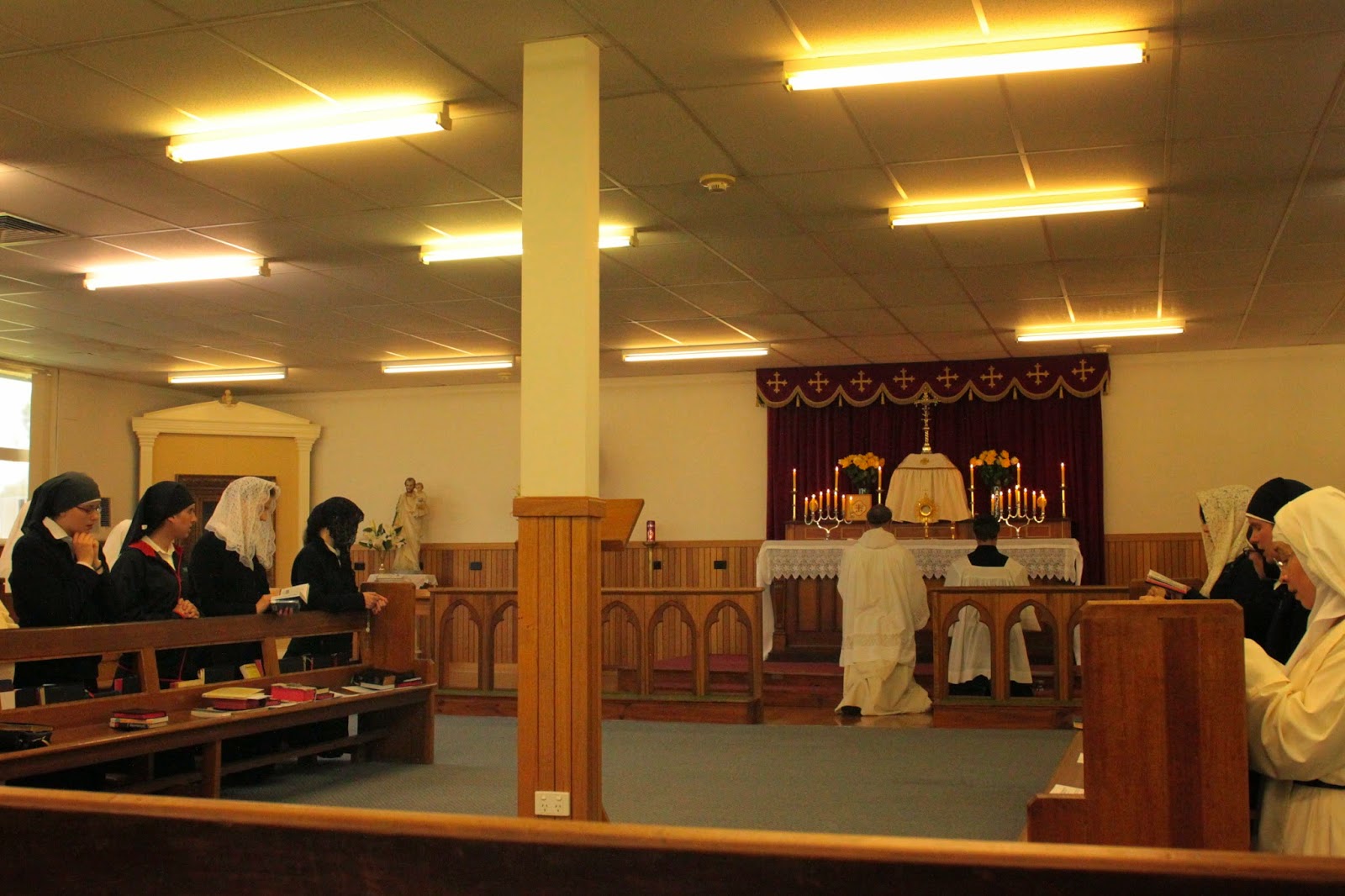 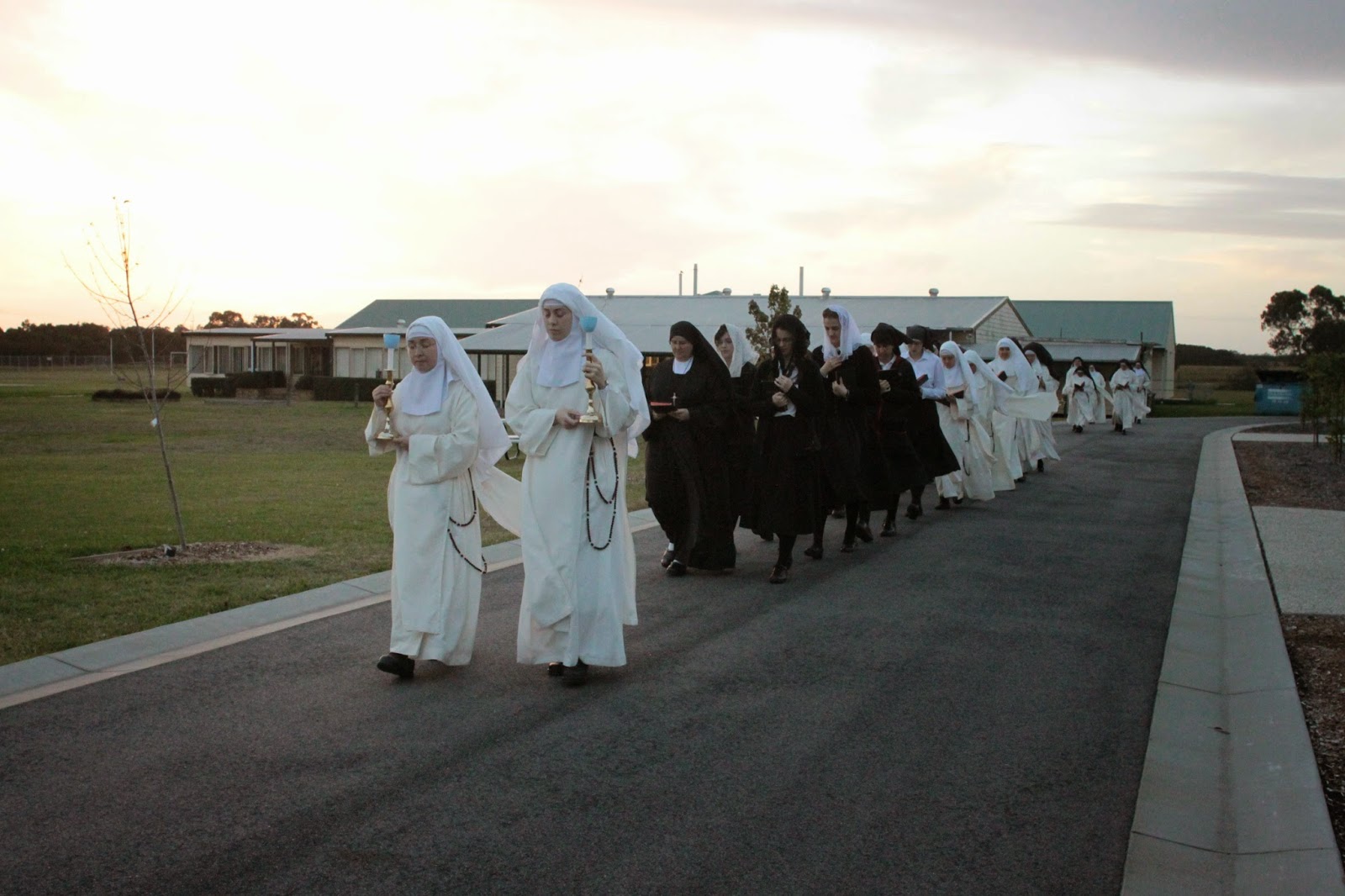 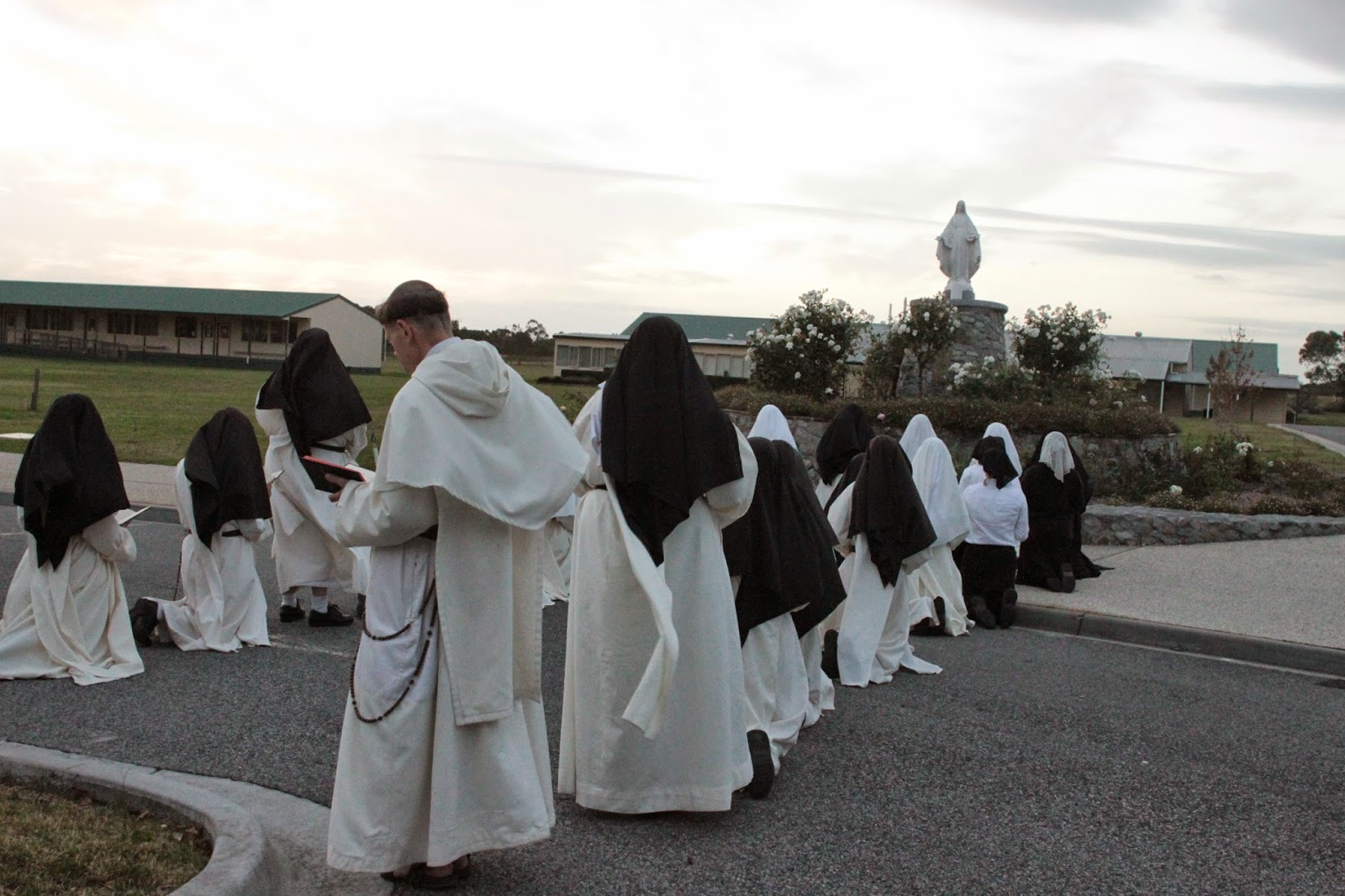 A special highlight of the retreat was the Salve procession during the office of Compline. This homage to Our Lady and Patroness of the order is dear to every Dominican heart, and it was enhanced by the attendance of our entire congregation of sisters. The substantial train of religious served as a testimony to the graces of vocation received through the mediation of her Immaculate Heart. 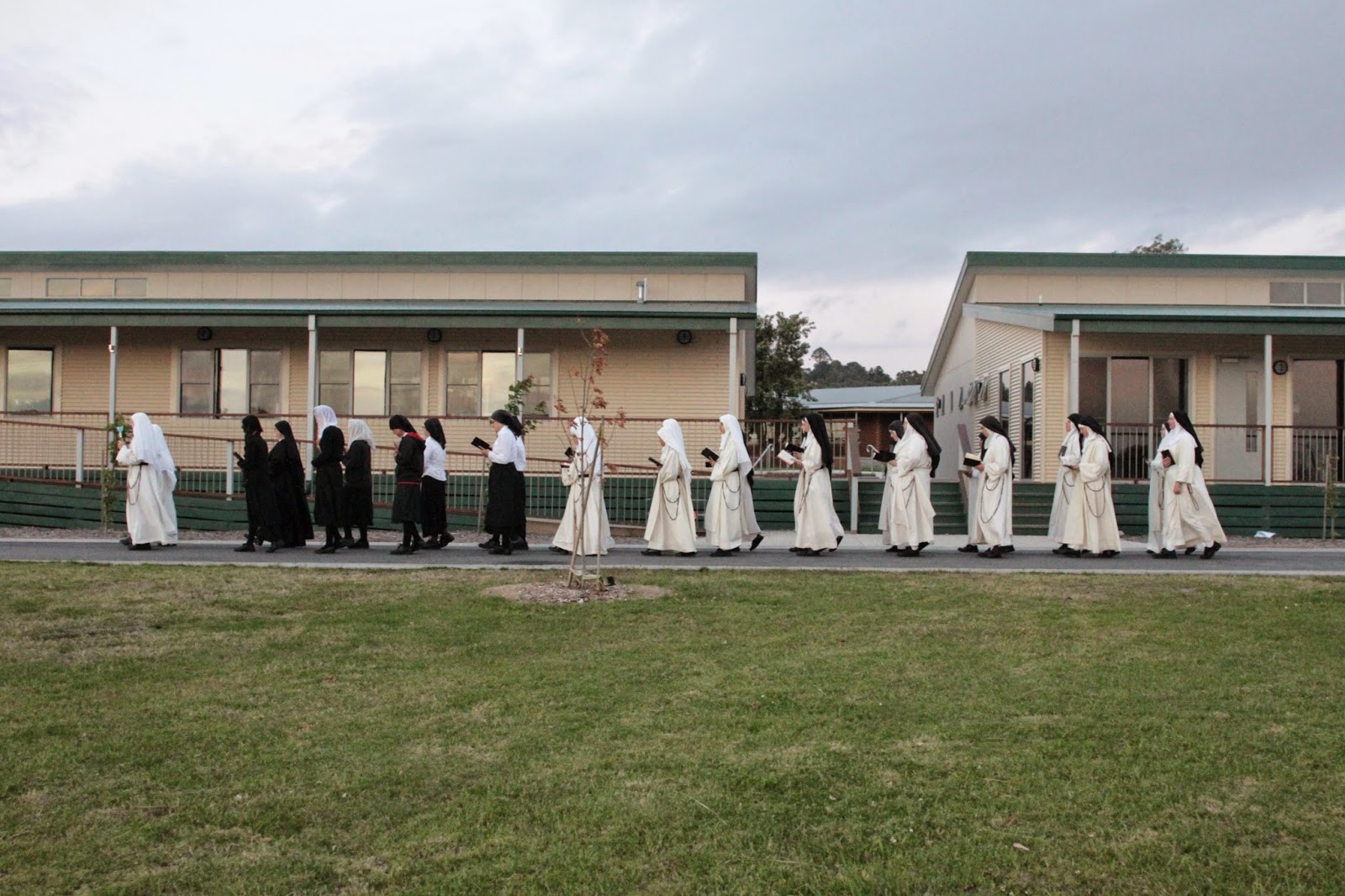 On 18 January, Miss Alexandra Reis from Ontario, Canada was received as a postulant by our congregation after the morning Office. The simple reception ceremony ended with the Salve Regina and the smiles of the entire community were evident as we prayed to the Immaculate Heart for her maternal intercession over our newest entrant. 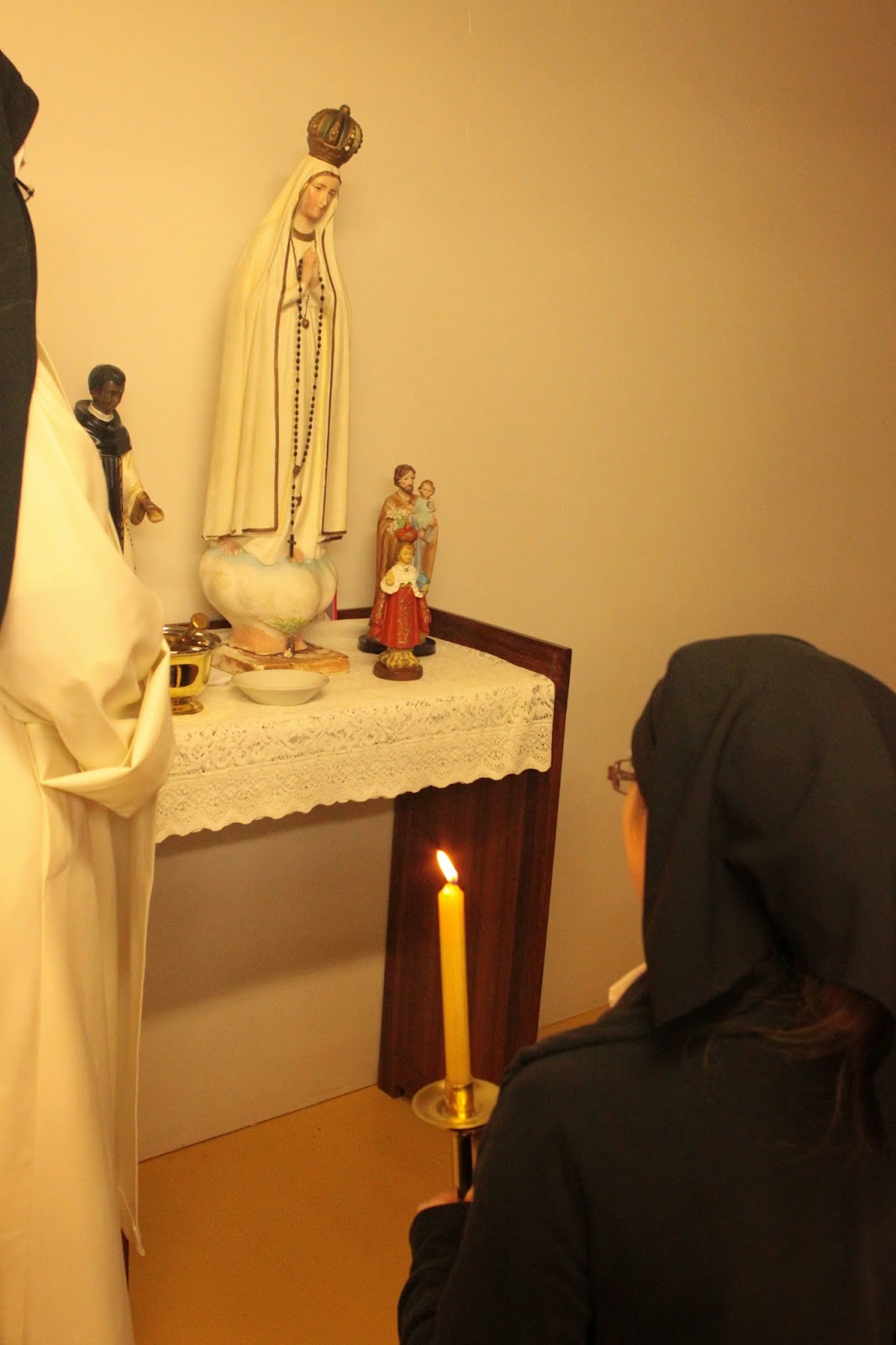 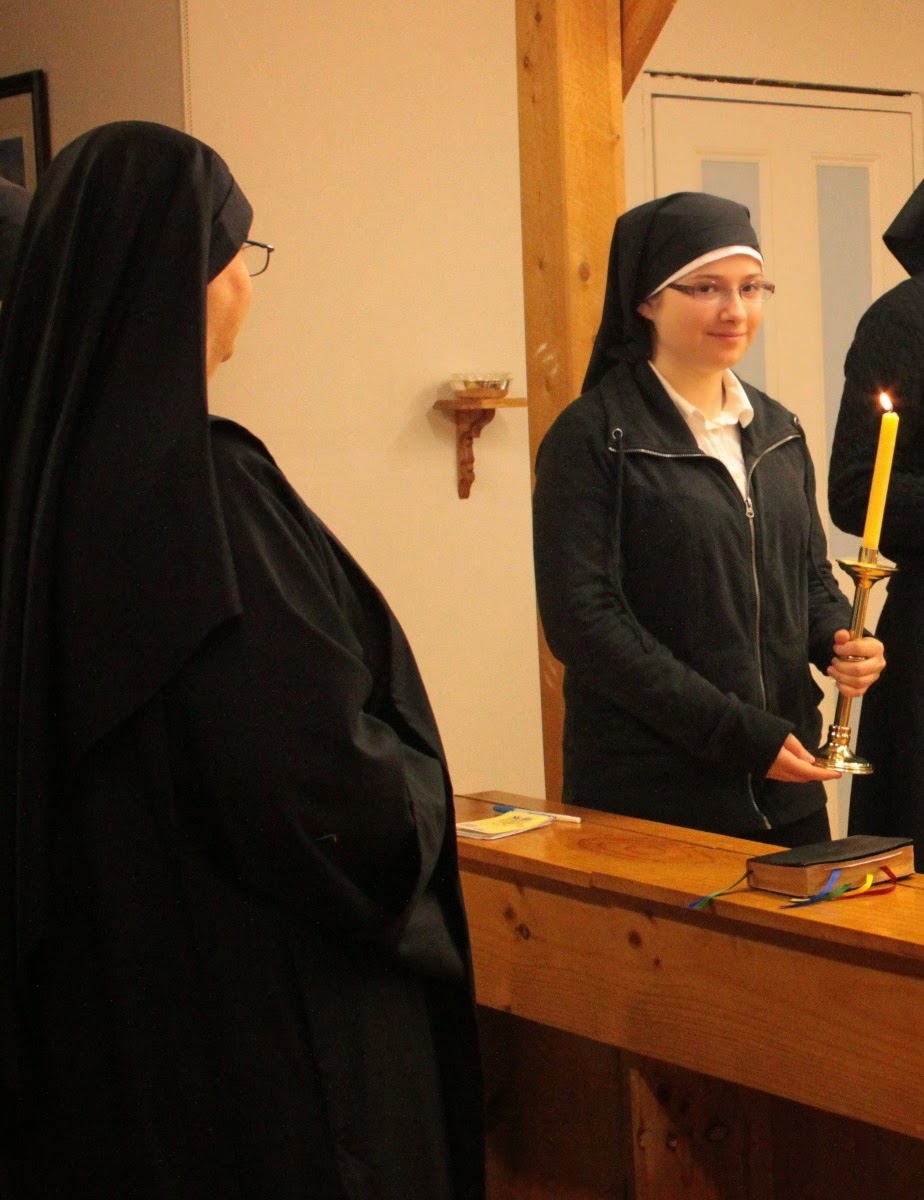 “What do you ask?”
“God’s mercy and yours, Father.” (The Ceremonies of Clothing and Profession) 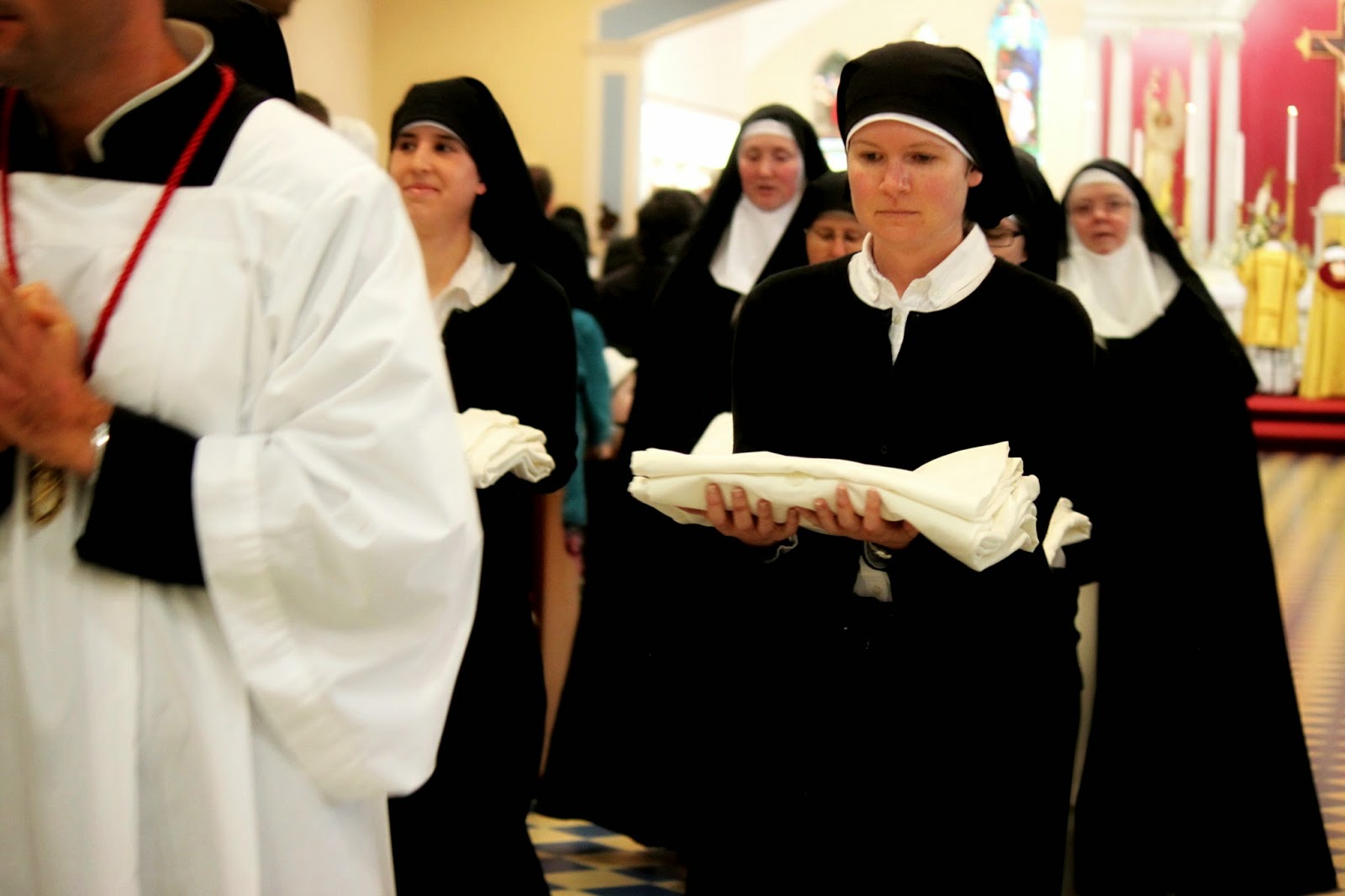 As mentioned above, an important step in the hallowing of a new year to the glory of God and to the sanctification of our neighbour is the dedication of our entire self to His love.

The ceremonies of religious clothing and the profession and renewal of vows enable the new novices and newly professed to consecrate themselves in varying degrees to God through the religious state. 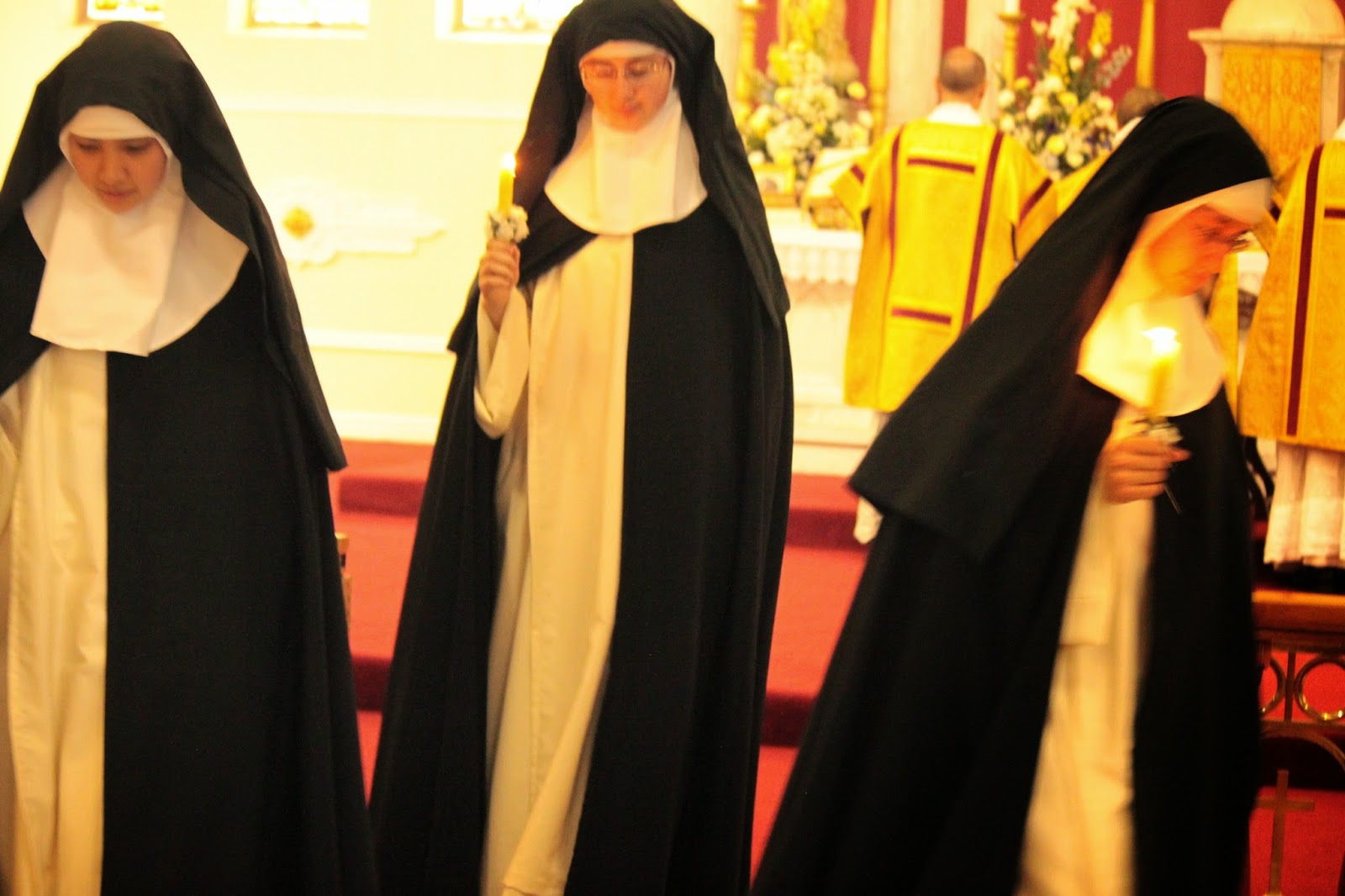 These progressive stages of consecration to God set the sister down the path to becoming a “living image of the church, a virgin by the purity of her faith, a bride by loving fidelity to the will of Christ in fervent charity, a mother by self-sacrifice for the salvation of souls [and a] living temple of God by her life of prayer” (Fr. Paul Hinnebusch, O.P.).


In changing their secular dress for the Dominican habit, five new novices undertook the first steps of renouncing the world and self at their official entrance into our congregation. A new group of Dominican saints were chosen as patrons for our new sisters who took on their names, in accordance with their desire to put off the old man with his deeds (Col 3:9). 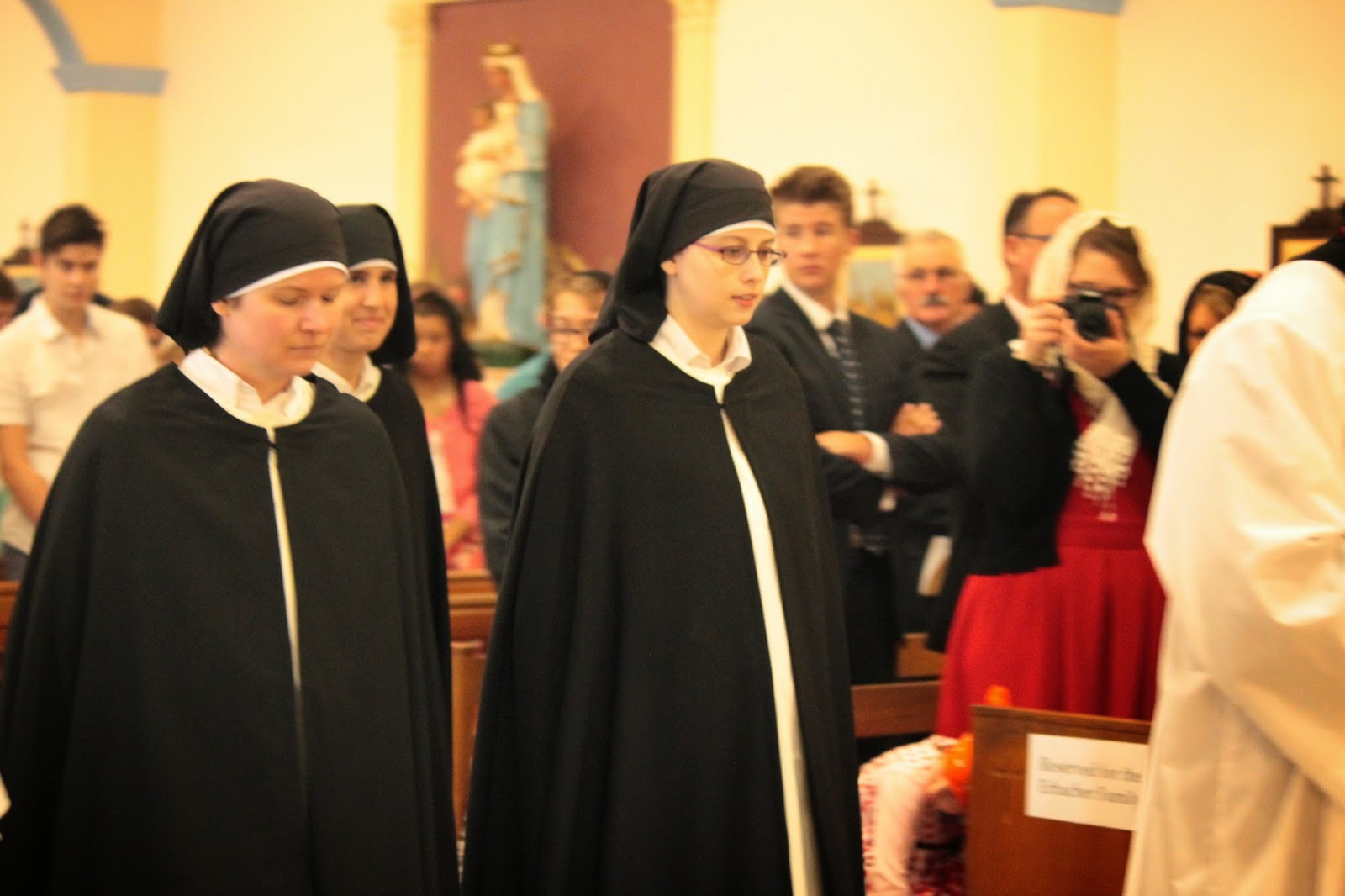 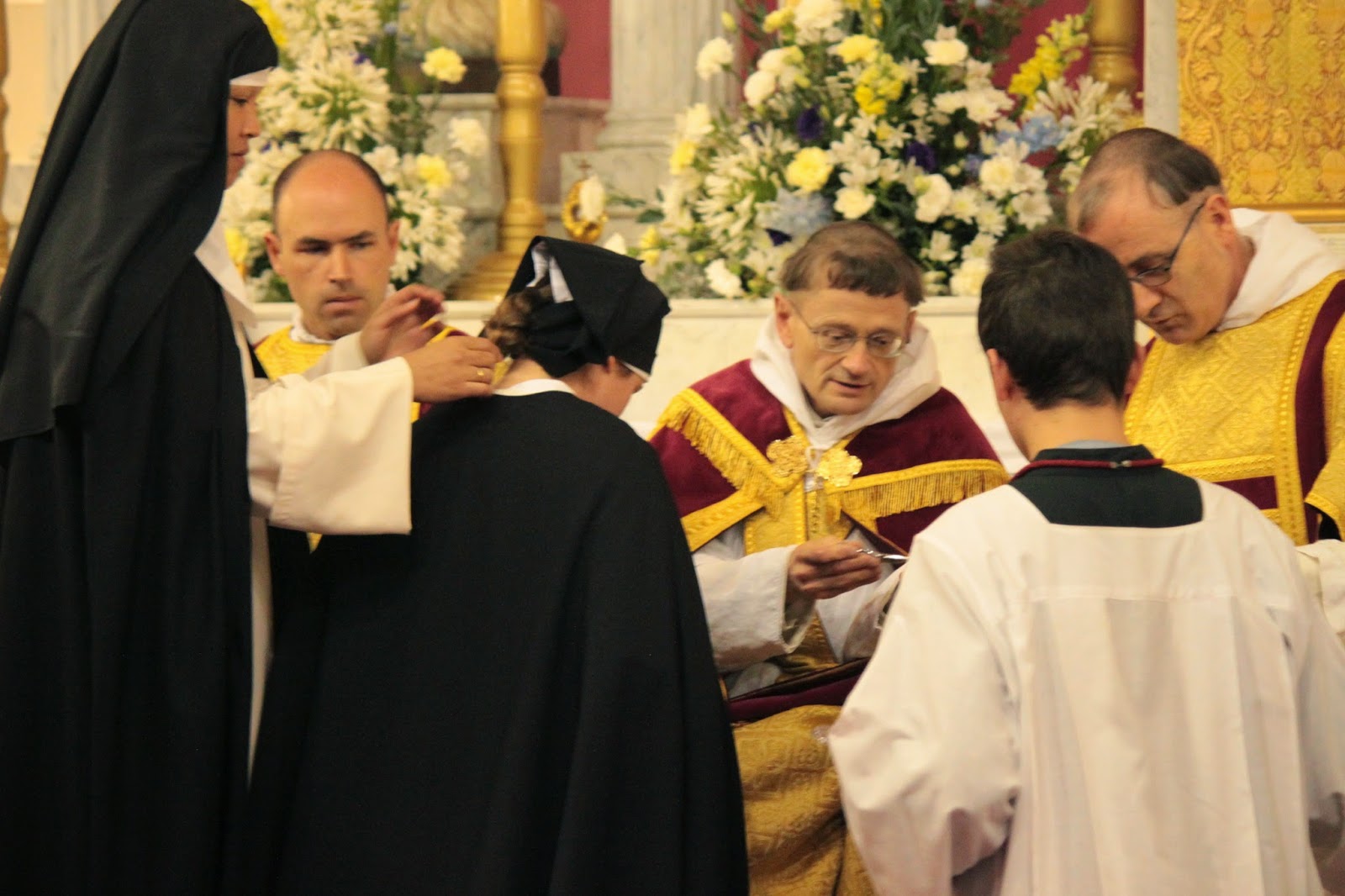 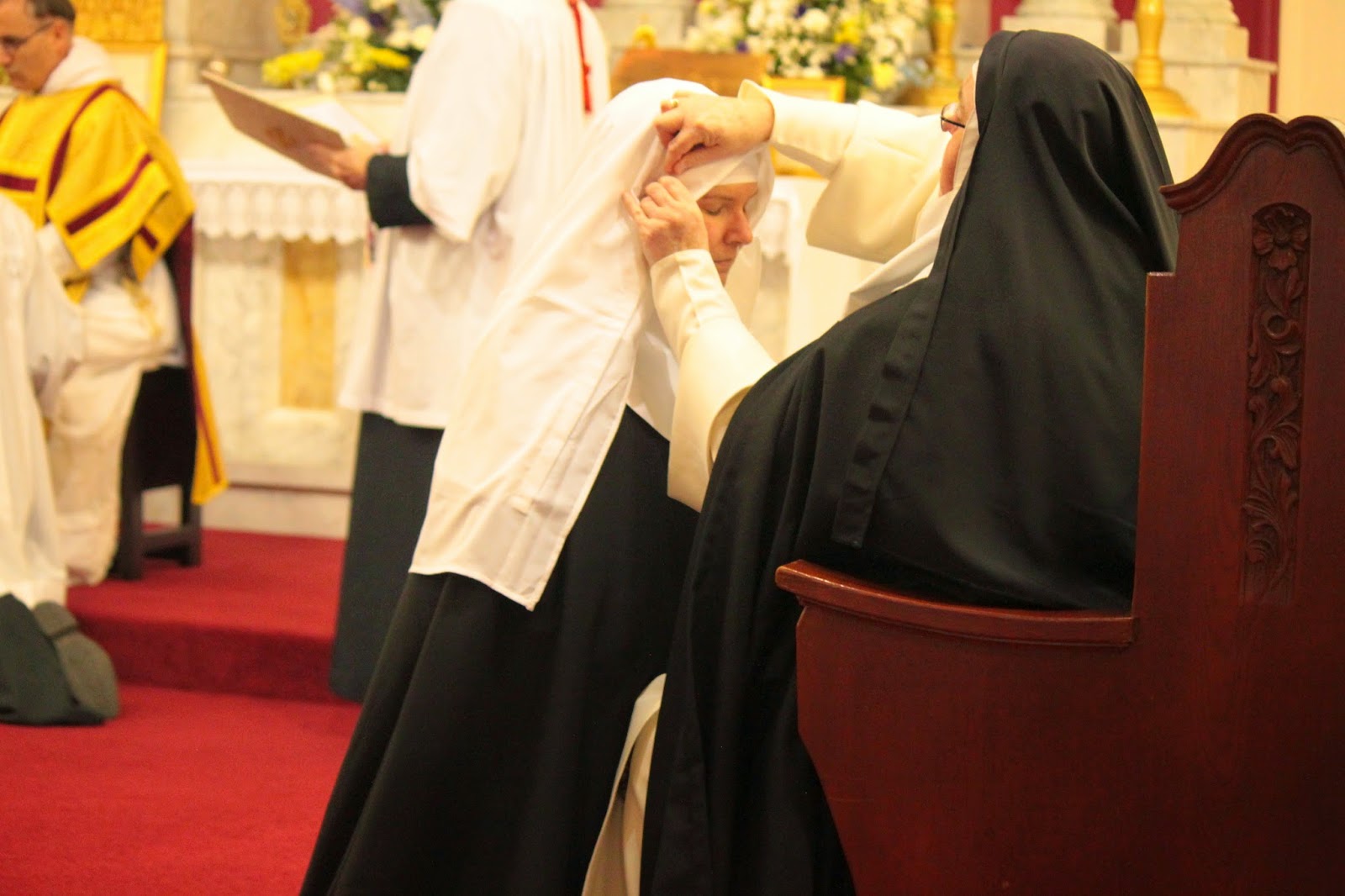 Miss Katherine Korr from the United States is now known as Sister Mary Peter, after the Veronese martyr and defender of the faith. The Office for the feast of our sister’s glorious patron proclaims the victory of a champion who, endowed with the brilliance of virginity, eloquence and miracles, fell from the assassin’s blow while writing the Credo in his own blood. 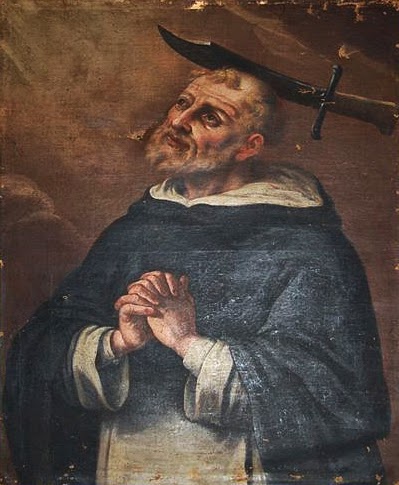 St Augustine of Hippo, our law giver and father, has his name adopted by the former Miss Elizabeth Smith from Wanganui. His holy rule, chosen by St Dominic for its flexibility and breadth of spirit, has served as the guide for religious perfection for countless Dominicans over 800 years. 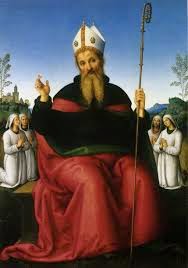 Blessed Diana d’Andalo became the heavenly patron of Miss Genevieve Erbacher who hails from Queensland. Founder of the convent of St Agnes in Bologna and noted for her deep spiritual friendship with Blessed Jordan of Saxony, she had earlier made a vow to St Dominic himself to enter the order in spite of the resistance of her family. 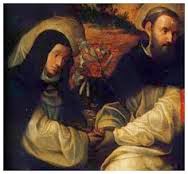 Miss Mary Williams from St Mary’s in Kansas received the name of Sister Mary Vincent Ferrer. This Angel of the Apocalypse who re-ignited the spiritual soul of Western Europe in the early 15th century by his preaching is a model for us sisters who are called to re-evangelise a world which has turned away from God. 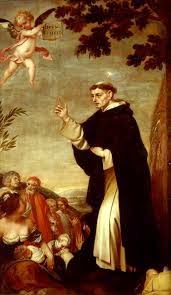 Our Lady of Sorrows, the exemplar of apostolic immolation for all religious souls, assumes her patronage over a former Society oblate who is now called Sister Mary of Compassion. 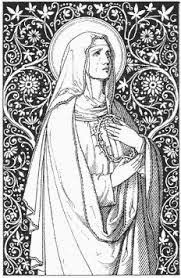 Crowned with a coronet of thorns and armed with the crucifix and rosary, our new novices are exhorted to imitate the Crucified Christ in their vocation and to serve Him and His Blessed Mother with fervour. 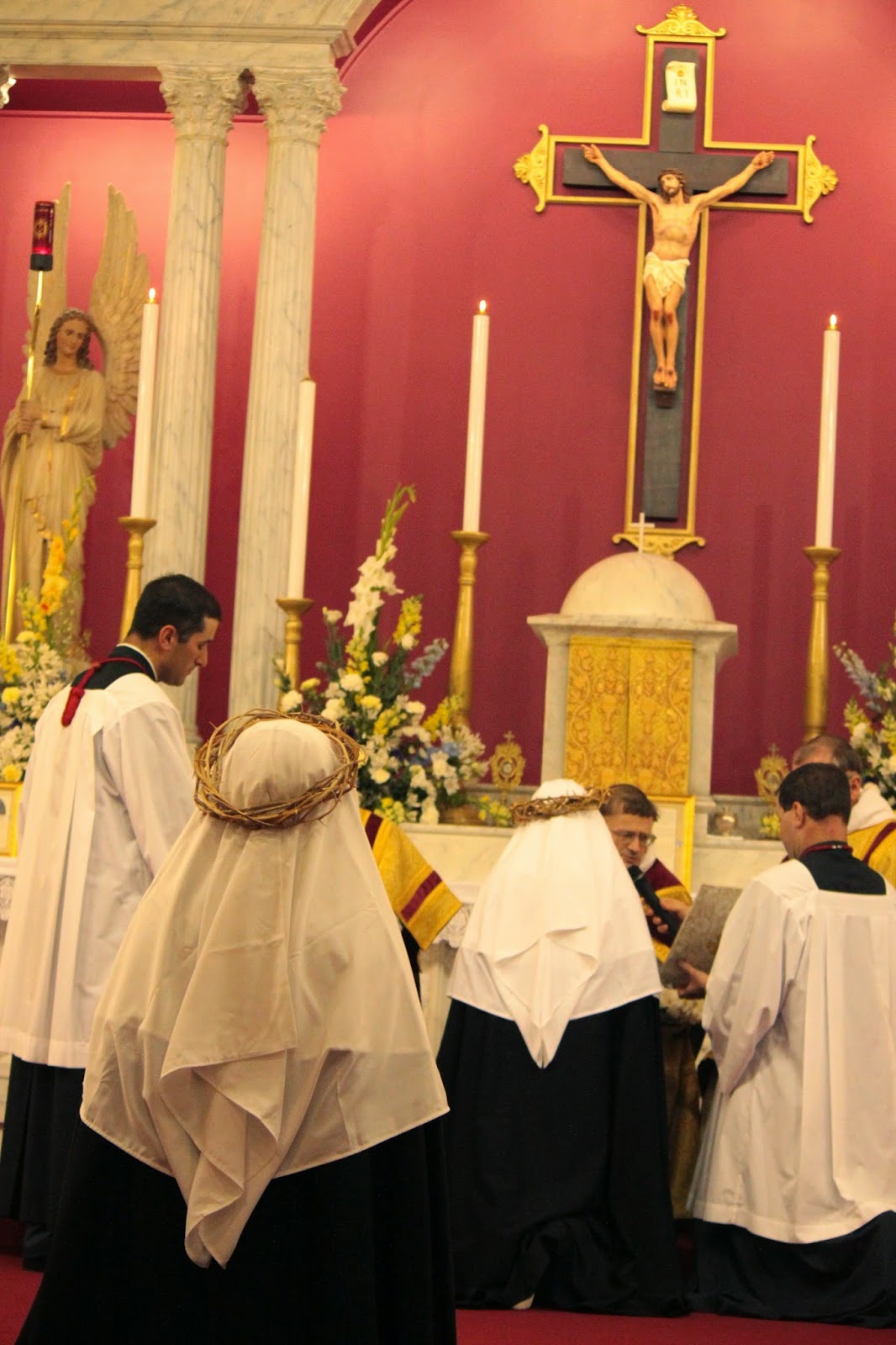 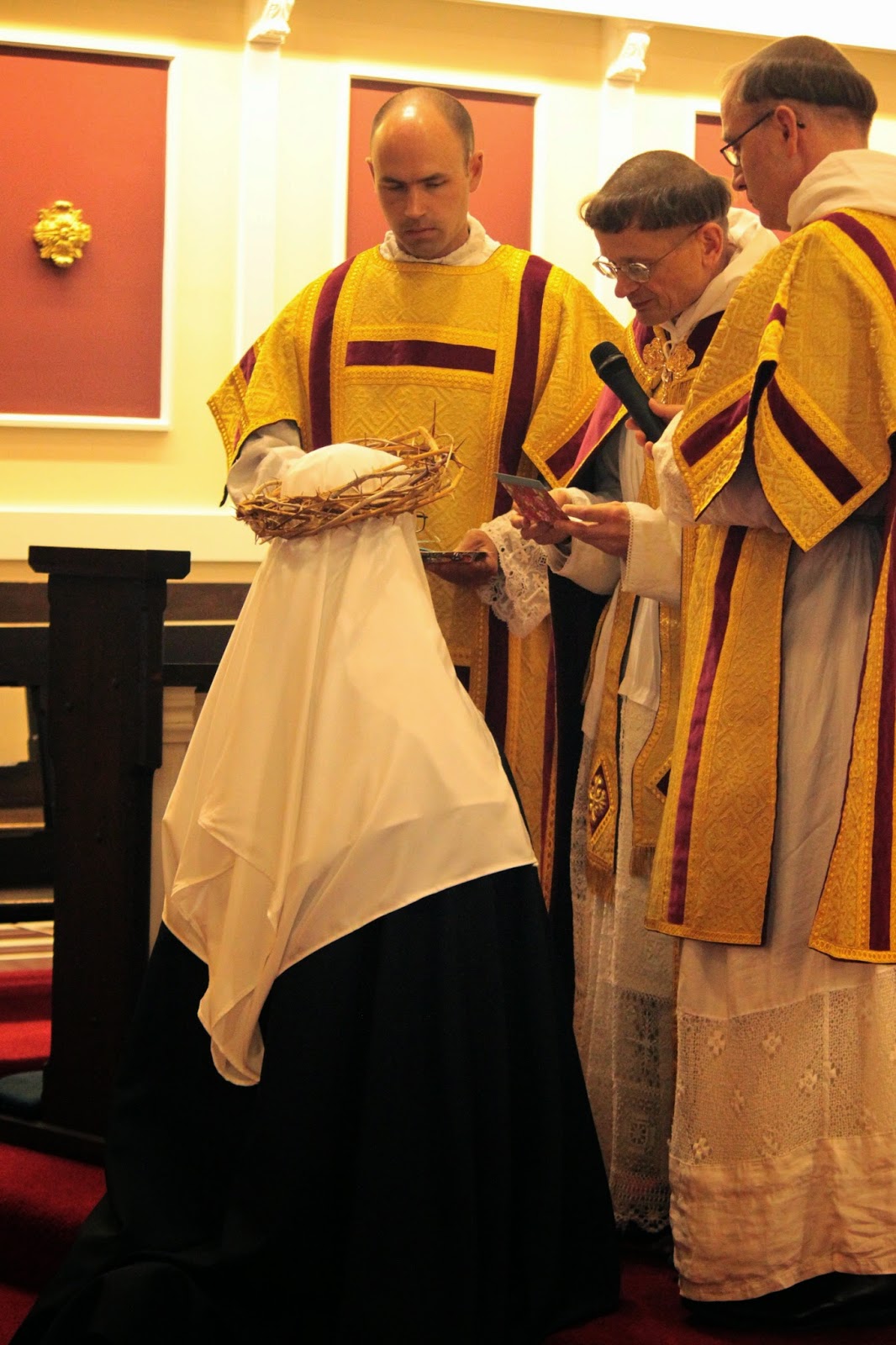 Please pray for them as they begin an entire year of intense spiritual formation through their classes in Dominican spirituality and the Rule and Constitutions together with additional periods of silence, study and prayer. 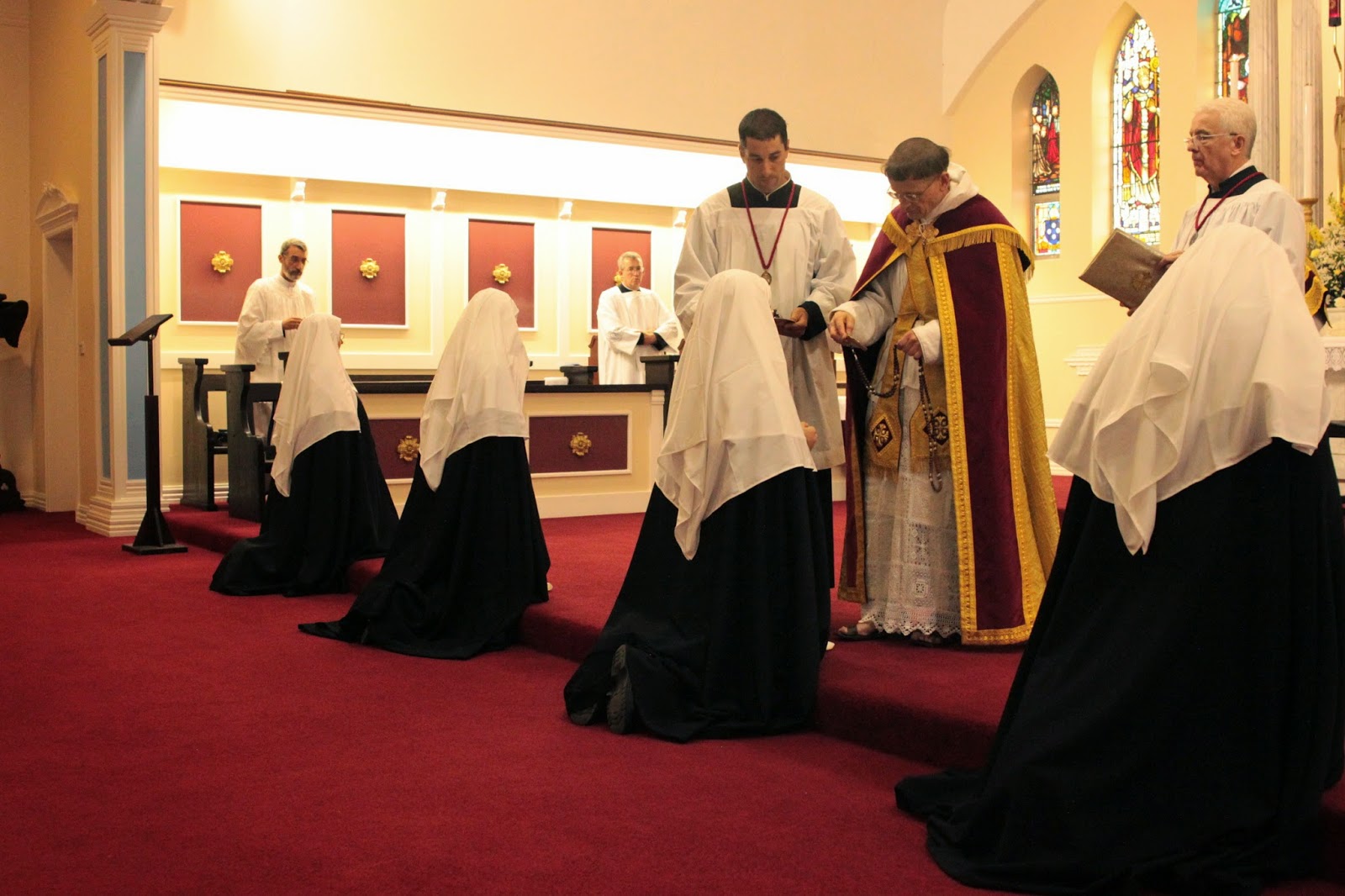 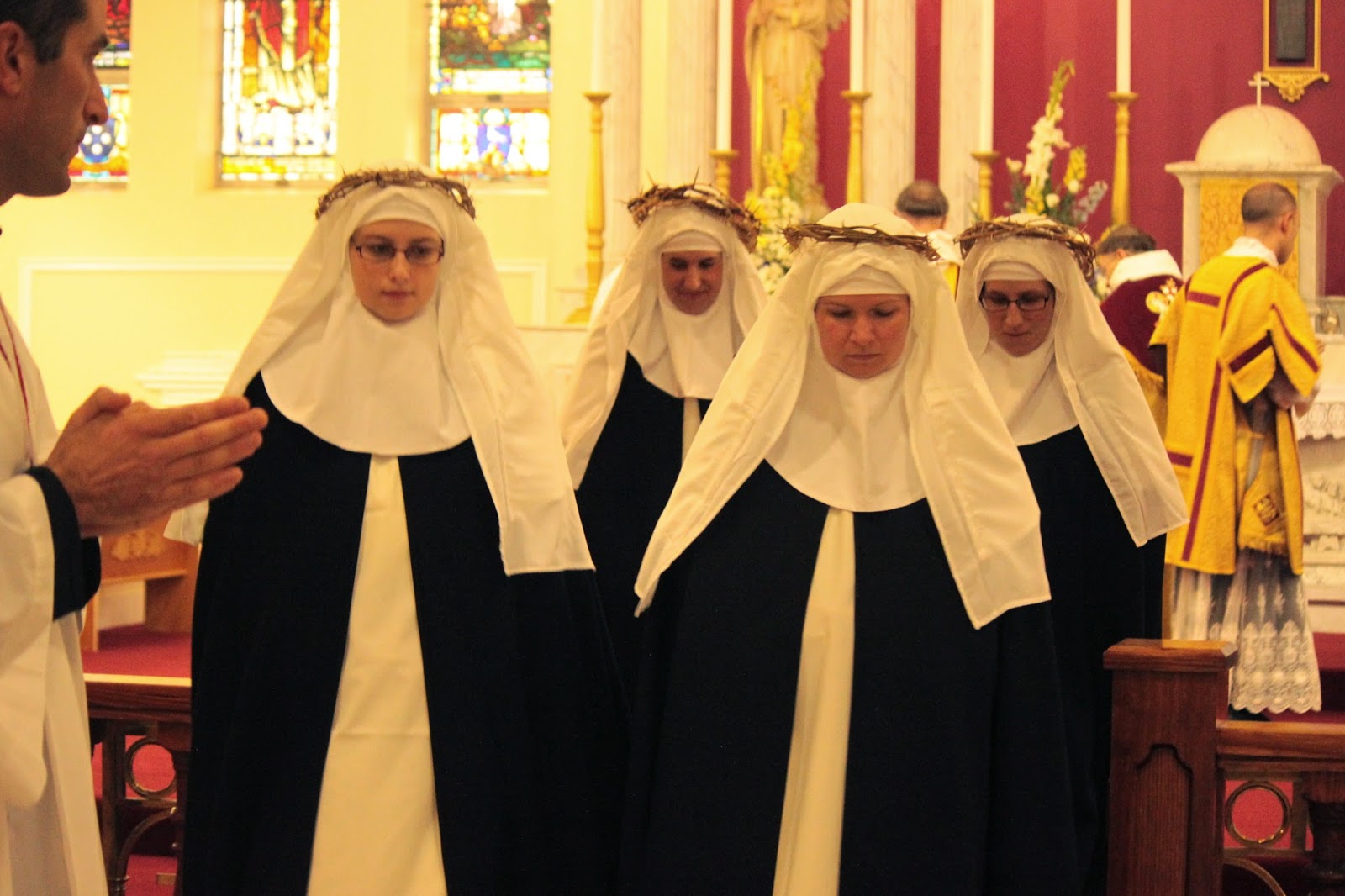 “He has placed His sign on my brow, that I may admit no other lover.” (Ceremony of Profession)

In making her First Profession the sister exchanges her white veil for a black one, symbolic of her consecration to God. In preparation for her Final Vows which are made usque ad mortem (until death), he sister promises to live in poverty, chastity and obedience, according to the Rule of St. Augustine and our Constitutions for three years and then for two additional years.

These vows bind the religious to God and turn her entire life with its daily sacrifices, acts and aspirations into a holocaust that is consumed by love. Religious Profession is, after the Holy Sacrifice of the Mass and martyrdom, the most fruitful source of graces for the Church and for souls.

It was thus a great source of joy for our congregation to receive three First Professions and another three renewals of vows on this day.

Sister Mary Anna, Sister Maria Columba and Sister Mary Jordan made their first vows, promising obedience to God, to the Blessed Virgin, to St Dominic and to the Mother Prioress General for three years.

“An unparalleled promise! The Church knows well in her wisdom that those who choose obedience, that those who practice it, possesses everything. This promise is a contract of love. Without faith, this contract is incomprehensible, it becomes an enigma. We remember those religious, who, during the French Revolution refused to leave, to disobey…those who were happy to submit themselves to that which the revolutionaries called ‘an intolerable yoke.’ Their love of authority was as solid as their faith, unchangeable as their faith, for God alone and to God alone.” (The cloistered Dominicans nuns of Arville.) 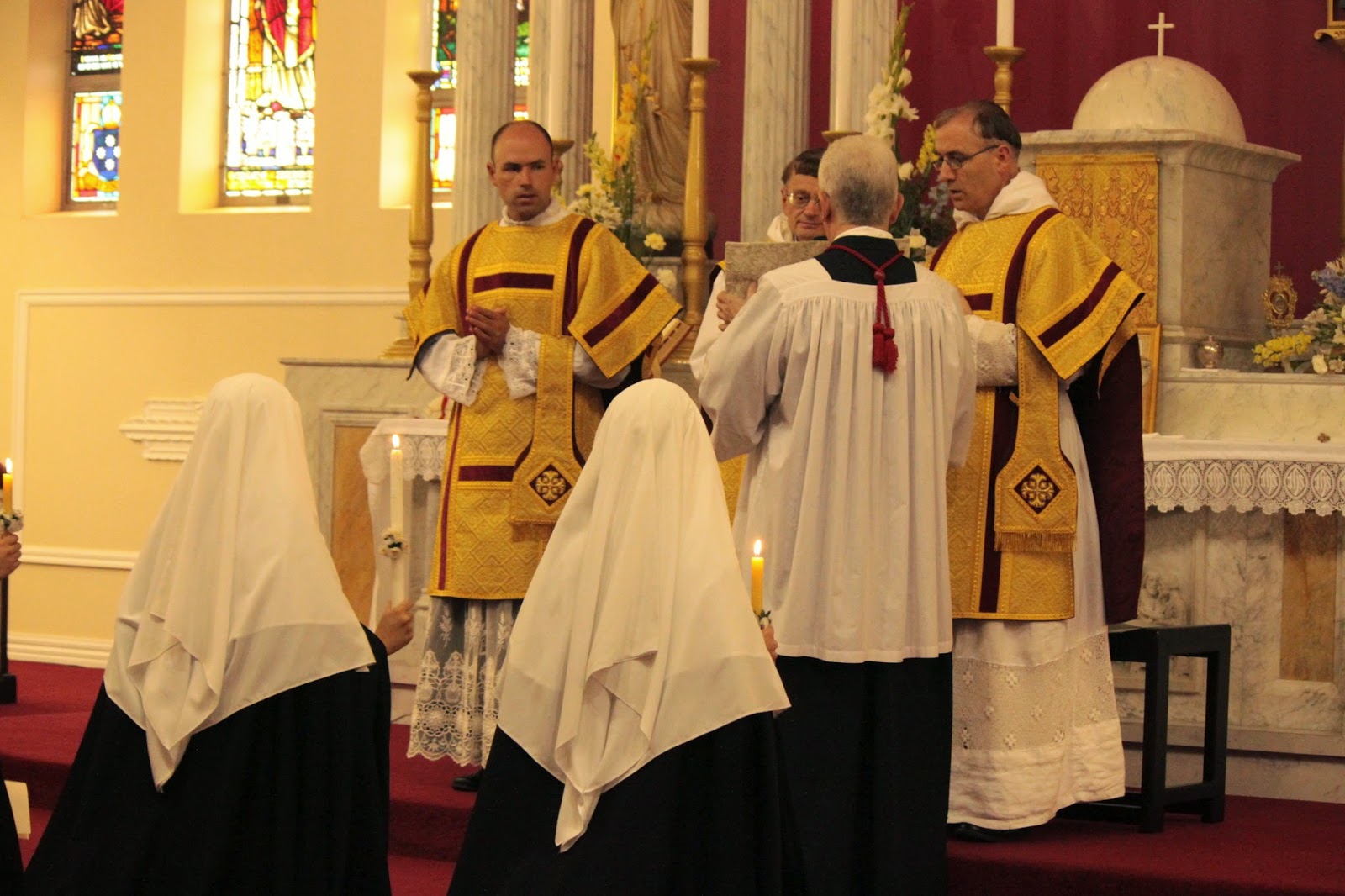 These acts of profession have consequences for eternity both for the religious and for the souls she is responsible for. The sister is no longer the same after, for she is engaged entirely to the service and love of the Holy Trinity and consecrated exclusively to Him. 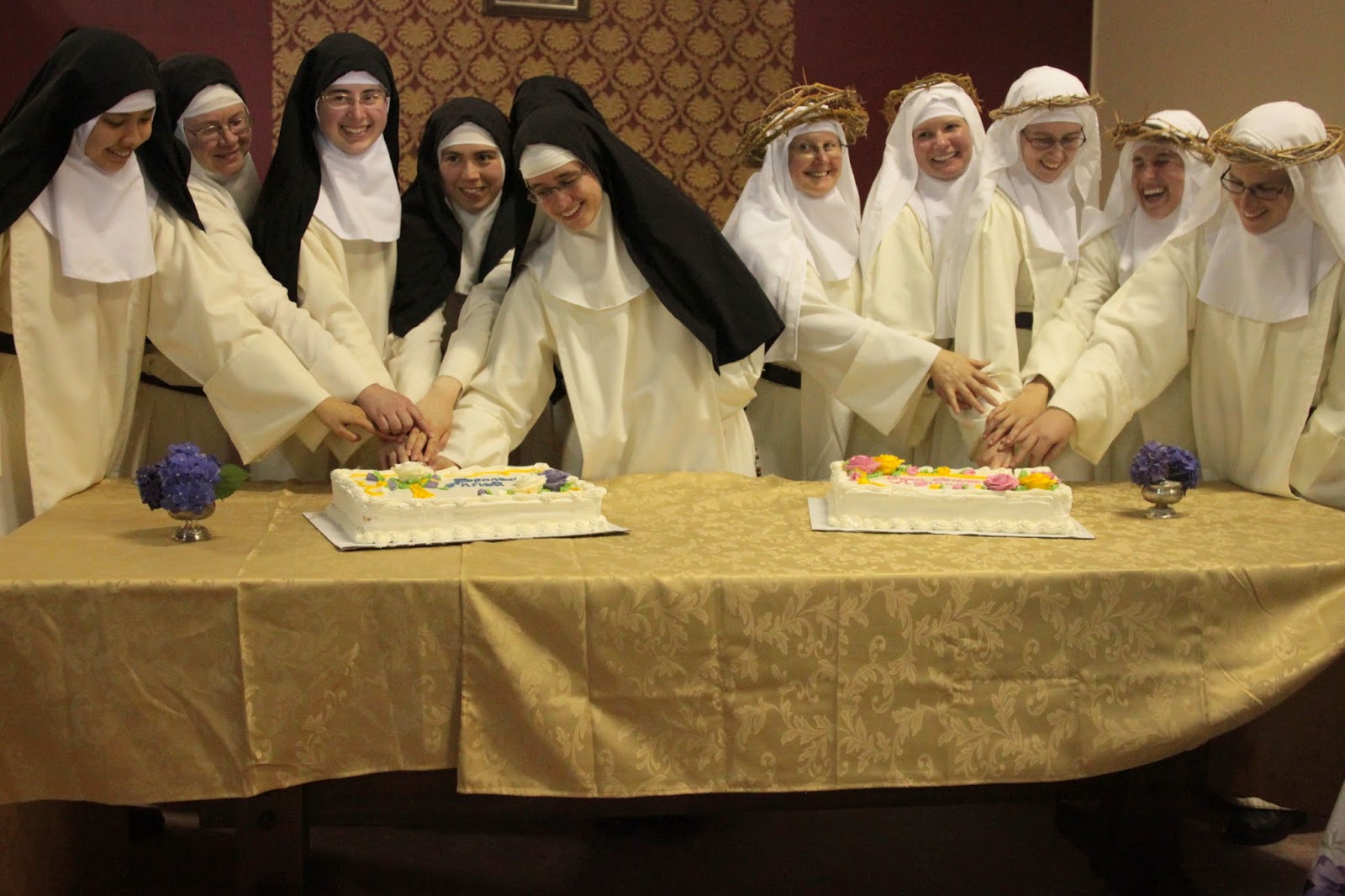 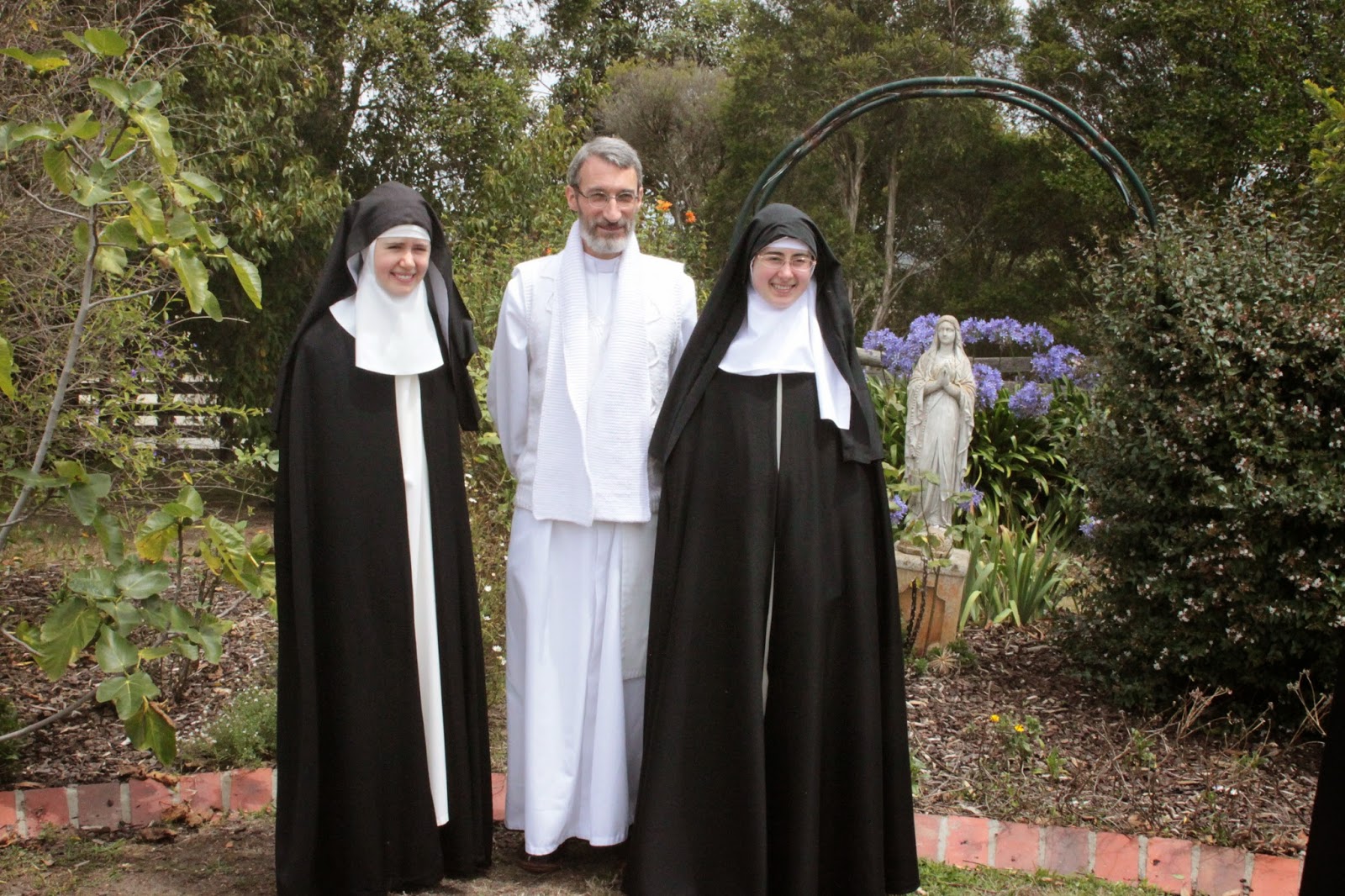 An aspirant visiting our community this New Year will witness the setting up of proper novitiate quarters. A larger population of sisters within the Motherhouse and the availability of some extra space have now enabled us to provide an environment conducive to the formation of our novices and postulants.

Our community is pleased to announce that we now have the capacity to conform more closely to the requirements of canon law, where the professed sisters generally recreate and work separately from the novices who are devoting themselves to their religious training.

We are also delighted to announce that Sister Mary Thomas O.P. and Sister Mary Anna O.P. will be present at St Thomas Aquinas College in the capacity of form teachers in the Secondary School, having completed their teacher training during the previous year. Please pray for these newly registered teachers as well as for our student sisters who are still training and studying for their education degrees.

Our vocation as teachers cannot be limited to helping students develop their academic skills, for it must first assist them in acquiring knowledge of the Truth, which has its origin and being in God. The history of the Church, from antiquity down to the present is full of admirable examples of consecrated persons who have sought and continue to seek holiness through their apostolate of education while at the same time proposing holiness as the fundamental goal of education.

May God give us the grace to achieve these lofty goals and to imitate these glorious predecessors in our vocation. 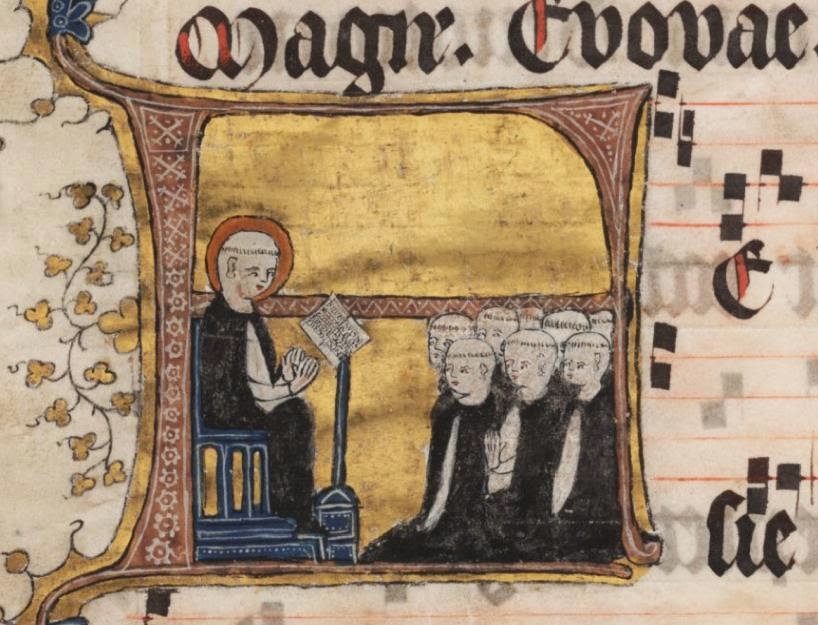 Posted by The Dominican Sisters of Wanganui at 8:45 PM

It was such an intimate moment and you could really feel the love and energy in the New York wedding venues. Our ceremony was the most beautiful and romantic ceremony I could have ever expected (and all our guests made sure to tell us they felt the same way once it was over!).